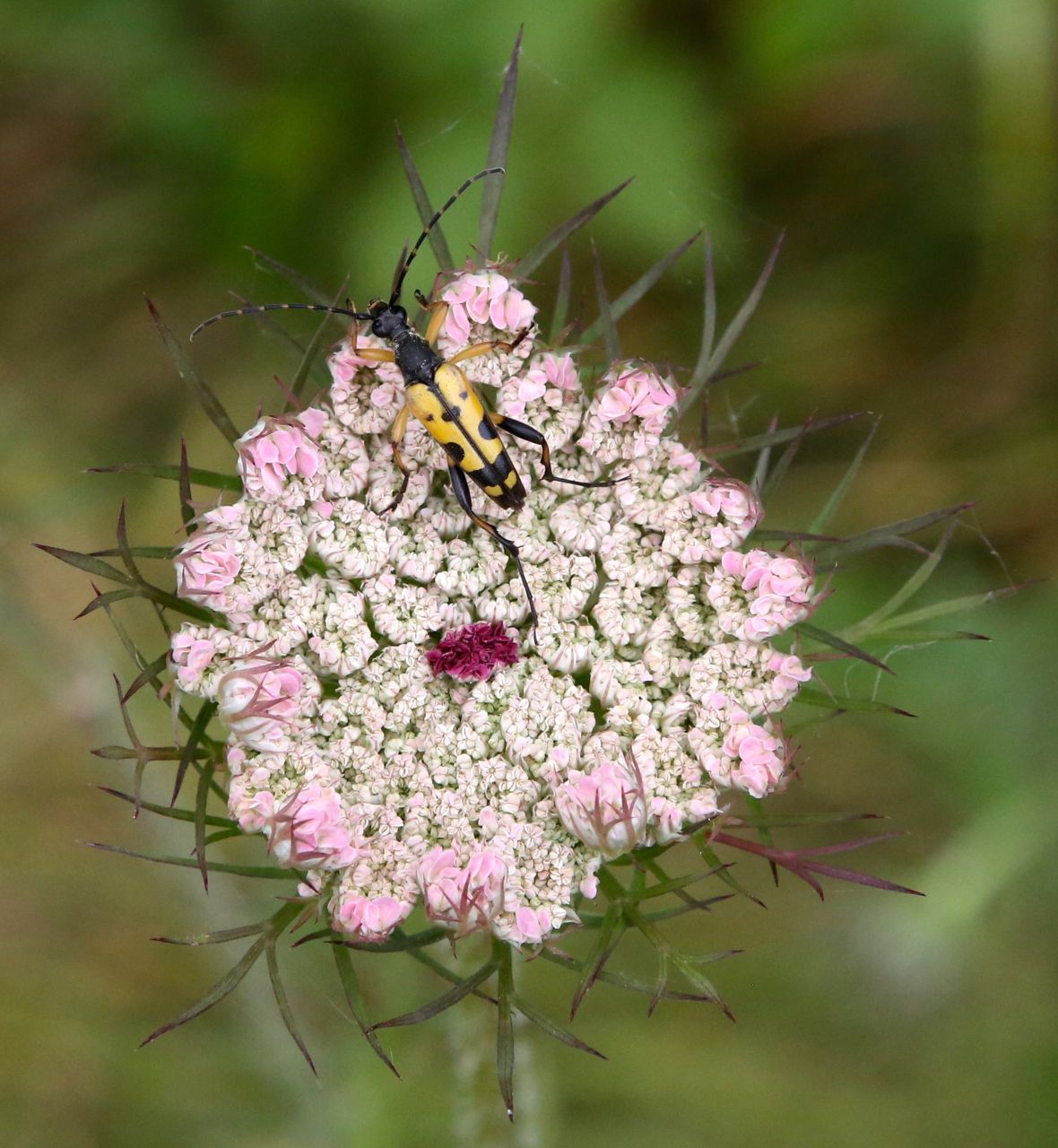 Olga and I managed to drag ourselves back to the park yesterday morning, sinus headache and all. We saw quite a variety of insects, including this Tiffany-brooch-like longhorn beetle and a red admiral similar to the one I saw last year in Spain. Olga ran and ran while I finished Jonathan Safran Foer's book "Eating Animals," about the ethics of farming and vegetarianism.

It was a good book, similar to numerous other books that have been popular in recent years, like "The Omnivore's Dilemma" and "Fast Food Nation," pointing out the evils of industrial agriculture and slaughter. Foer's position is that eating any animals is morally wrong given the pervasiveness of factory farms in the United States. There's no way to avoid eating meat that comes from cruelty unless you avoid meat altogether, he says.

As you know, I lean vegetarian, although I was only strictly vegetarian for a time back in the early '90s. For about 20 years I didn't eat red meat or cook any meat at home, until I met Dave. These days I usually go vegetarian when I make my own eating choices, which means limiting my intake of meat, chicken or fish to about once a day. Living with Dave -- a proud and enthusiastic carnivore who always cooks dinner -- it's not realistic to imagine I can do much more.

I've written about this before -- my struggle to figure out my ethical role in a system of unnecessary animal cruelty. If I can't eliminate meat from my diet altogether, minimizing my intake seems like the next best option. (I'm not quite as all-or-nothing as Safran Foer, recognizing that I have to make allowances for other people. I already feel guilty for being such a Debbie Downer when Dave whips up lamb shanks or some similar dish that makes me blanch. I eat them but I don't hide my ambivalence very well.)

Perhaps we can make some smarter shopping decisions, though that will take research. And what about eggs? What about dairy? They're farm products that carry a heavy burden of cruelty, but I've always eaten them.

At some point regulators have to step up and prevent the worst abuses, but under the current system in the U.S. that's not happening. Farming has been subjected to the same Wall Street pressures facing most industries -- privatized health care, privatized correctional facilities, journalism, you name it -- putting profits ahead of ethics. And the underlying problem -- which Safran Foer did not mention in his book -- is one I rail against all the time, overpopulation. Factory farming is surely a direct result of having to economically feed millions and millions of mouths -- far more than were eating farm products a century ago, back in the days of lower-yield family farms.

Anyway, I do think about this issue a lot. I really struggle with it. I just don't see how I can go back to vegetarianism myself, though I certainly would if it were up to me.
Posted by Steve Reed at 6:21 AM