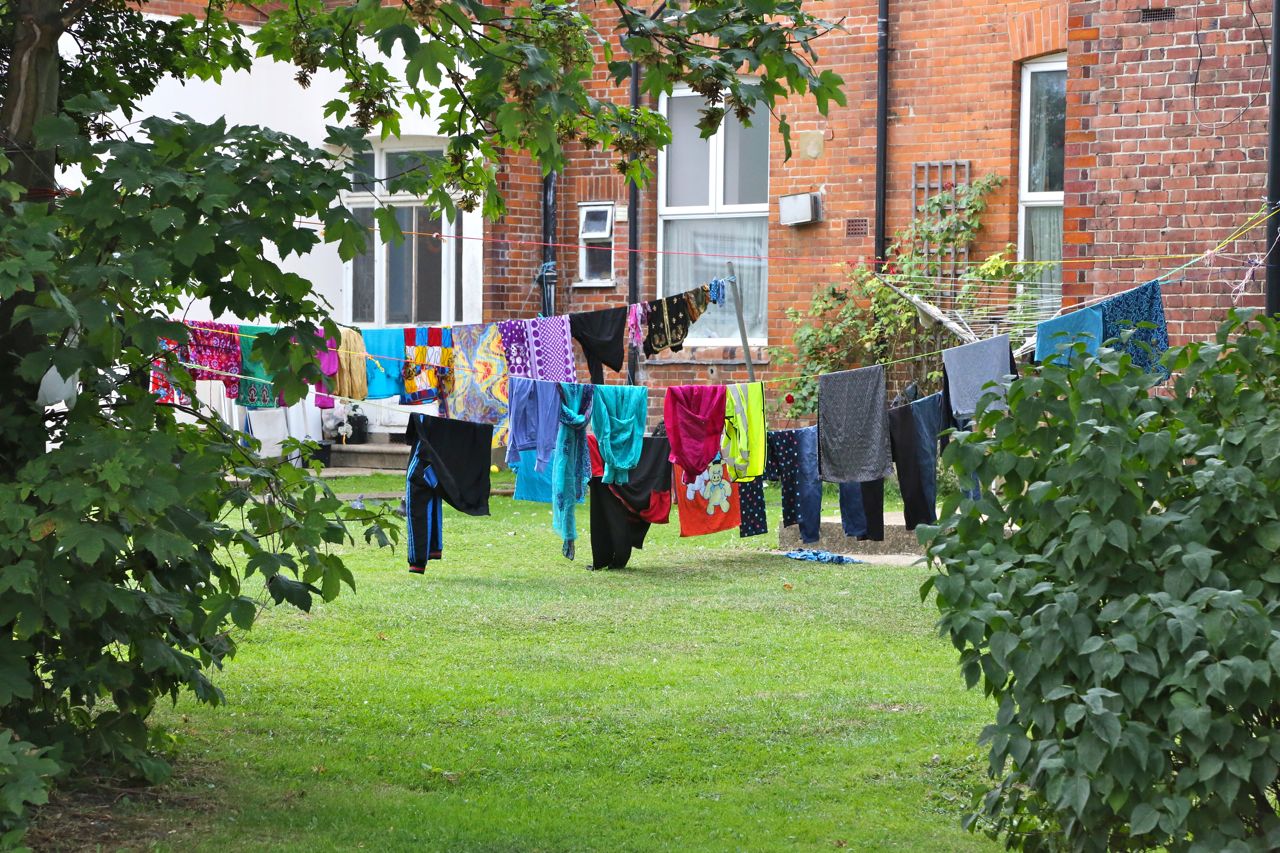 It's ironic that I'm posting a picture of laundry, because yesterday was definitely not an ideal laundry day. It poured rain pretty much constantly. I sat inside and read, finally making a dent in the second half of "The Sea" by John Banville, a dreamy novel of loss and nostalgia that I may or may not like -- I haven't yet decided. I probably won't decide until the last page.

It wasn't just rainy -- it was also cold, in the mid-'50s, cold enough that I needed slippers and a hat indoors. I needed a jacket all last week. We have definitely been experiencing the first pinch of autumn.

Dave and I spent the afternoon watching old musicals. We started with "The Music Man," which I wanted to see because of our library talent video. Backstory: Each department in the school where I work produces a short video to welcome students. These are compiled and shown at an opening assembly. For our library video, I suggested we do a rhythmic piece using the various beeping, stamping, shushing sounds of checking out books and managing students. A co-worker suggested we use the music from "Marian the Librarian," from "The Music Man," to set the rhythm -- so we found a karaoke version on YouTube and played it in the background as we stamped, scanned and stacked books to the beat. I haven't even seen the results yet -- and I won't until the assembly -- but it made me curious about "The Music Man." So there you have it.

I'd seen "The Music Man," but it had been decades. The only thing I remembered was the teenage girl who kept exclaiming, "Ye gods!" Turns out the "Marian the Librarian" scene employs library tools as rhythmic devices in the same way we did, which is probably why my coworker thought of using that tune.

Then we moved on to "West Side Story," another movie I hadn't seen in years and years. Both of these are pretty long movies, so they were perfect for killing off a rainy afternoon.

Between the rain, reading and films, I managed to sneak in a short walk for Olga -- who seemed pretty much content to sleep all day -- and some cleaning.

The Bleeding London folks apparently did meet up for photography yesterday, despite the rain. I admire their dedication but I decided early on that I was not going out in that weather. I have my limits!

(Photo: Laundry day in Alperton, on Saturday.)
Posted by Steve Reed at 6:13 AM