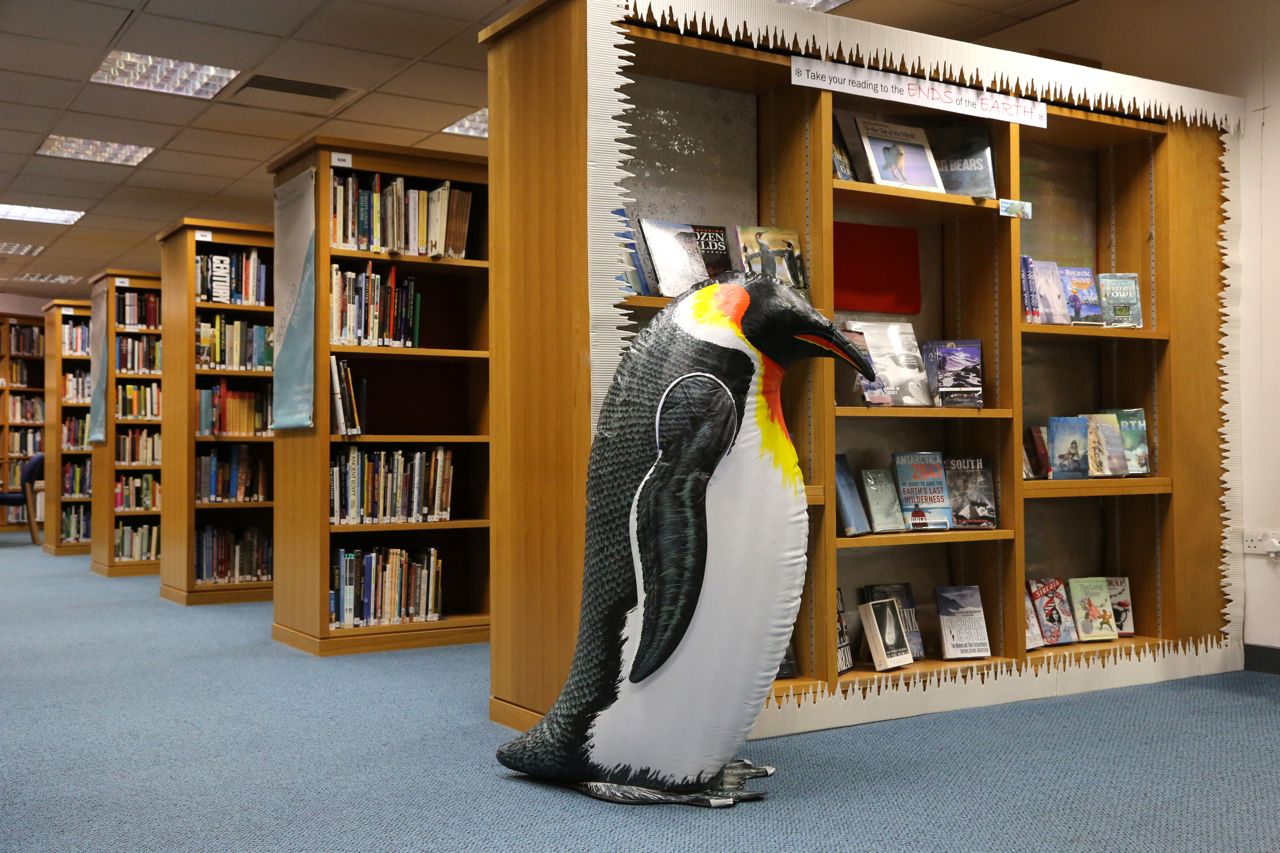 This will seem like a very strange post for Thanksgiving, although it is about a large bird.

One of the librarians at work put together a display of books about the north and south poles, and augmented it with a large inflatable penguin that belongs to her son. No one has checked out any of the books, but the penguin has become a bit of a star. The only problem is, he has a slow leak and needs a bit of re-inflation every morning. 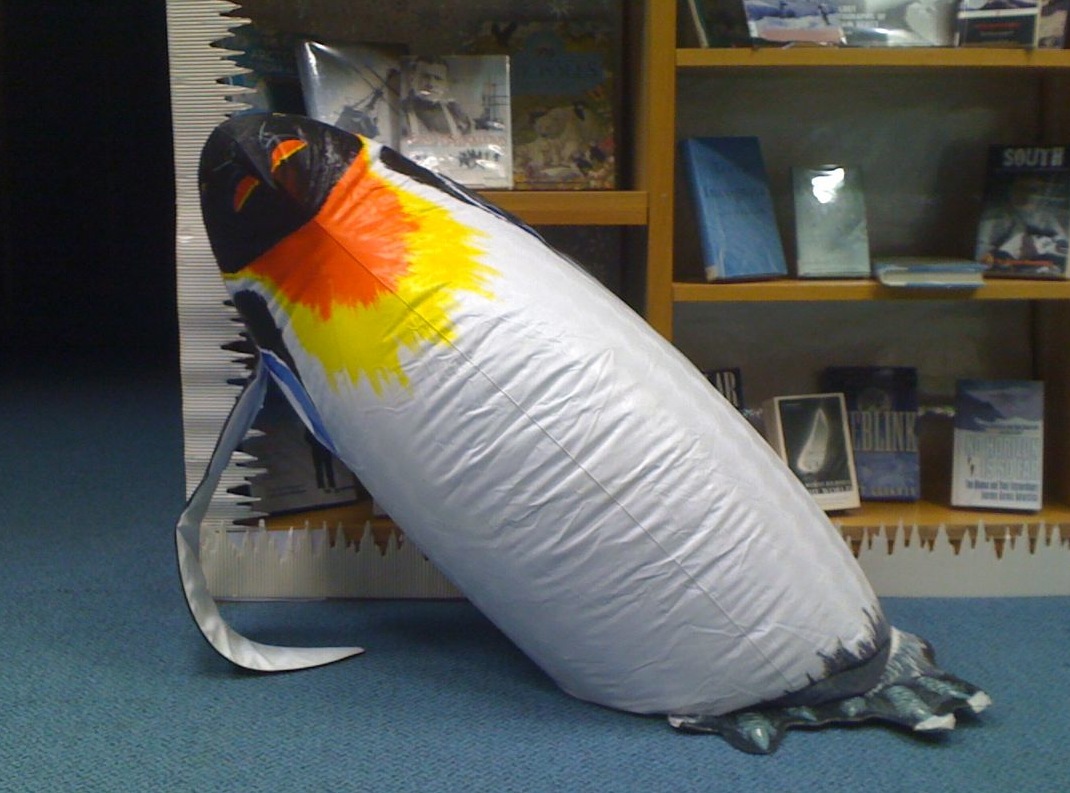 On the recent days when I went to work early because of choir practice, I was often the first person in the library and thus the first person to see the state of the penguin. It was a source of constant amusement.

Sometimes it seemed like he'd merely had a little too much to drink.

And sometimes he seemed completely blotto.

Anyway, I think our substance-abusing penguin is about to be sent away, because he's just too much work. Blowing up a penguin every morning is not really in any of our job descriptions. And it always seems like something we need to do surreptitiously, like it's embarrassing or uncomfortably intimate, with all the attendant huffing and puffing. I take the penguin back into the stacks to blow it up in the dark, which I suppose would look even weirder if anyone saw me. 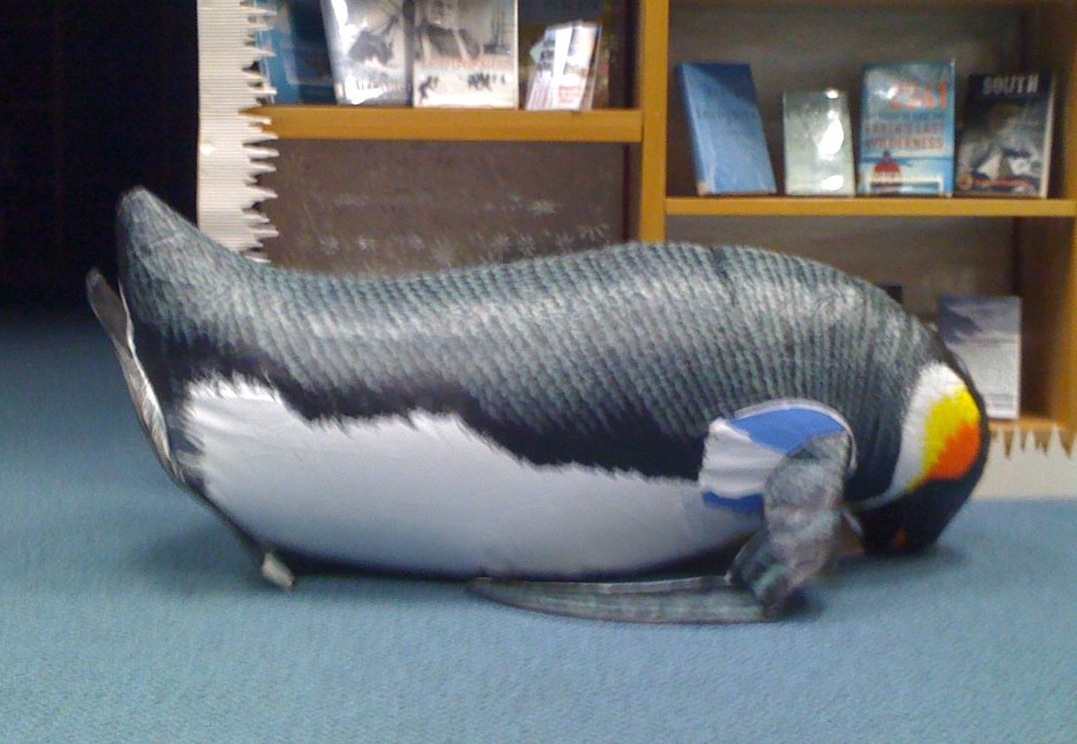 Dave and I are off to the Cotswolds today. We'll catch a train after lunch with the dog. We have some things to do around the house this morning.

I did get out yesterday and do a few more streets for Bleeding London, once again up near Neasden and Harlesden. That's the first photography I've been able to do in a while. I got some OK shots, even though this was after I'd had a couple of pre-Thanksgiving pints with Dave, Gordon and Lisa at a pub near school. Let me just say, photography on a buzz is not a whole lot of fun. It's too precise and too demanding. I much prefer it sober.

Happy Thanksgiving, everyone -- or at least, to those of my readers who celebrate Thanksgiving. I'm thankful for all of you! I'll continue blogging from the Cotswolds, provided we have reasonably functioning Internet at our inn.
Posted by Steve Reed at 6:54 AM

The penguin is hilarious, it looks quite drunk.

Whatever happened to Her Majesty?
(Whoops!! Nearly forgot the caps.)

Oh, she's still around. Fortunately she doesn't need re-inflating, because that would be completely undignified.

That second photo would make a cracking Christmas card

Oh I have not laughed this hard at this hour (5am) in forever!! I will think of this as I sip eggnog and cook ham. Have a great get-away and a most lovely day.(Ms.Moon is going to love this I know) Thanks Steve...

You made me laugh out loud this morning! The penguin is hilarious in his various states of inebriation.
And you hiding in the dark to re-inflate him?? Oh dear ... too much ... have to laugh some more.

So funny! Happy thanksgiving to you and Dave!

Ms. Moon DOES love this.
Nothing says Happy Thanksgiving like a drunken penguin!
Love to you and Dave and please know I am grateful for you.

no telling what the penguin does after hours.

I have this same penguin!!! We named ours August, & if it gets too cold he starts wilting in that same way. It's hilarious :)

This post made me laugh out loud! Great penguin story!