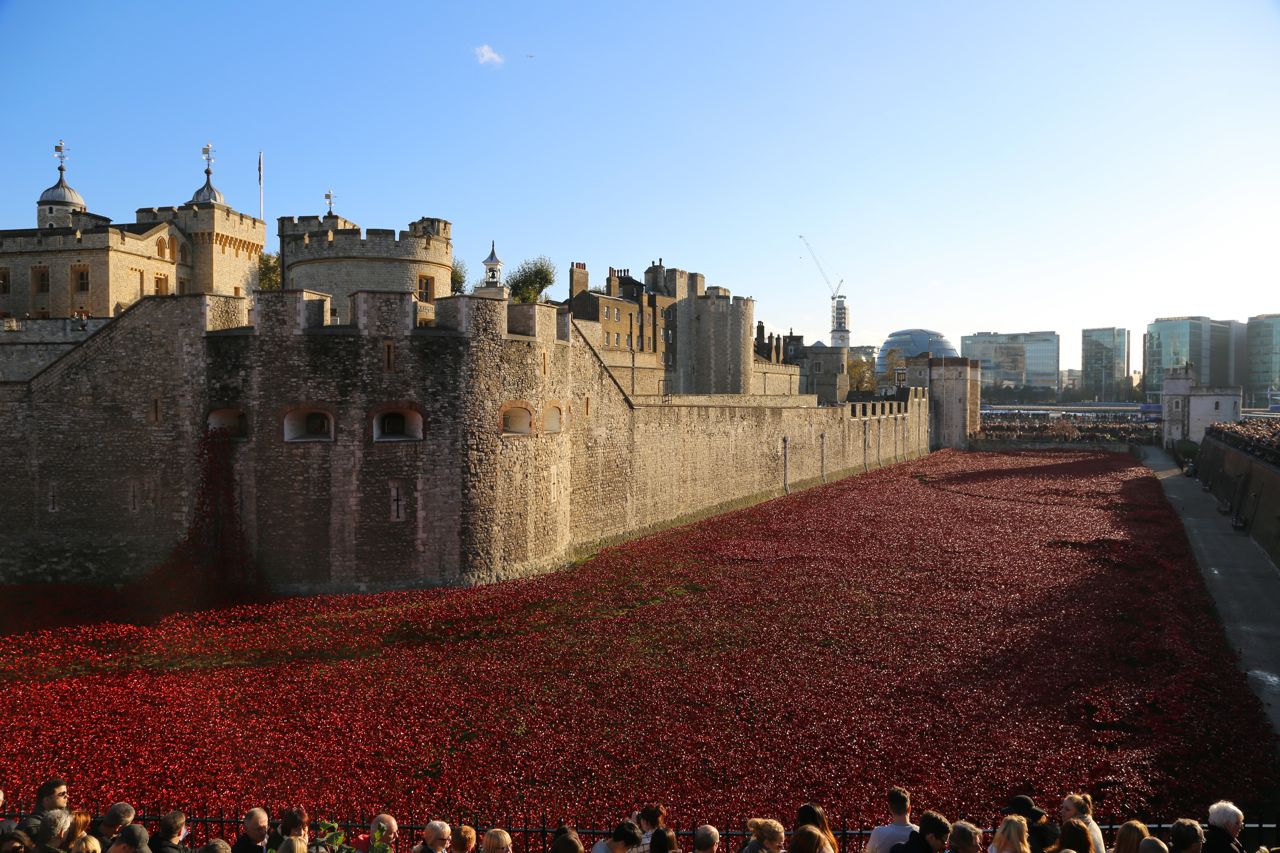 Yesterday was a busy day!

In the morning I shot 39 streets for Bleeding London, northwest of us near Neasden.

Then, in the afternoon, Dave and I braved the crowds and went to see the ceramic poppies filling the moat at the Tower of London, in an exhibit called "Blood Swept Lands and Seas of Red." Created by ceramics artist Paul Cummin, each of the 888,246 poppies represent a British military fatality during World War I. The poppies were installed in the moat in early August, and over time filled it, seeming to spill from a window in the Tower. 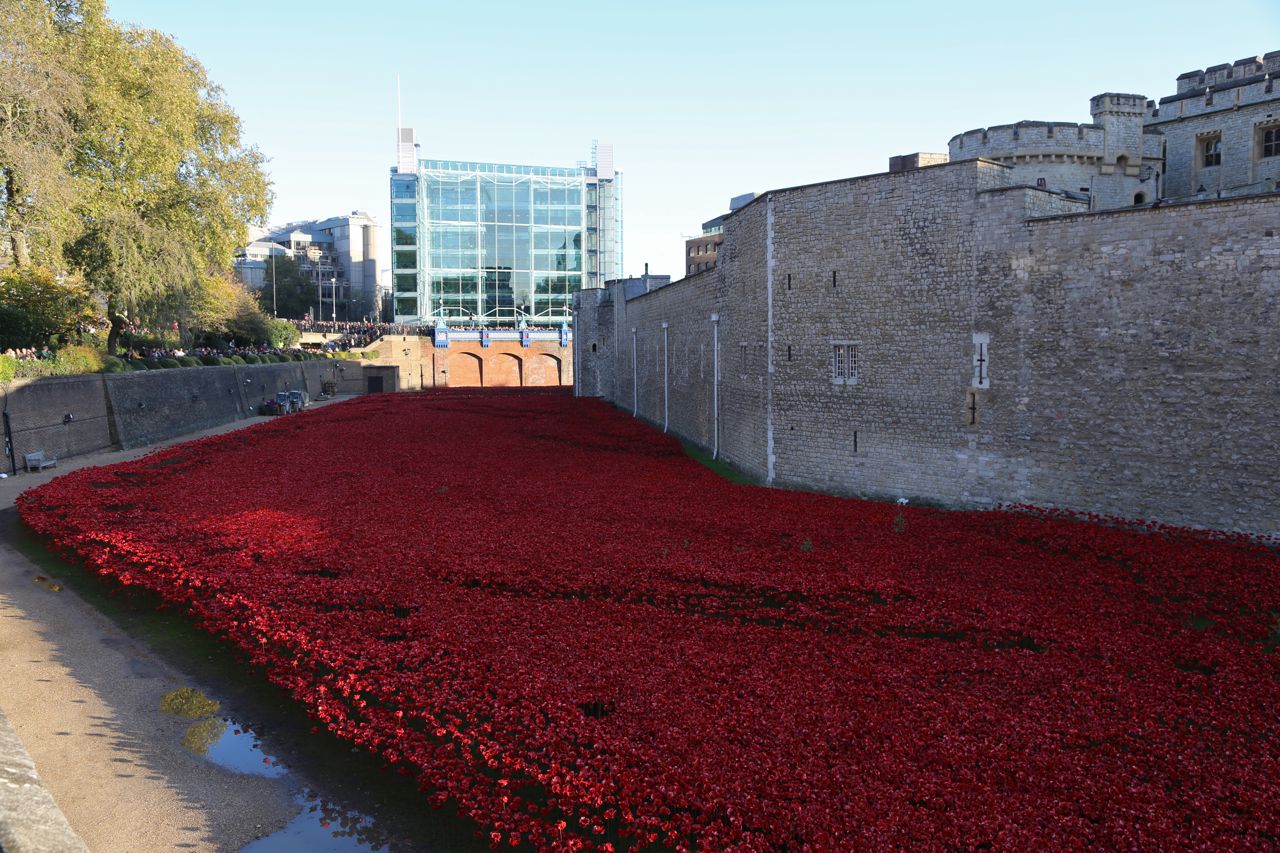 This was the last weekend to see the exhibit, timed to coincide with the 100th anniversary of the first day of Britain's involvement in World War I. The poppies will be removed after Remembrance Day on Nov. 11. 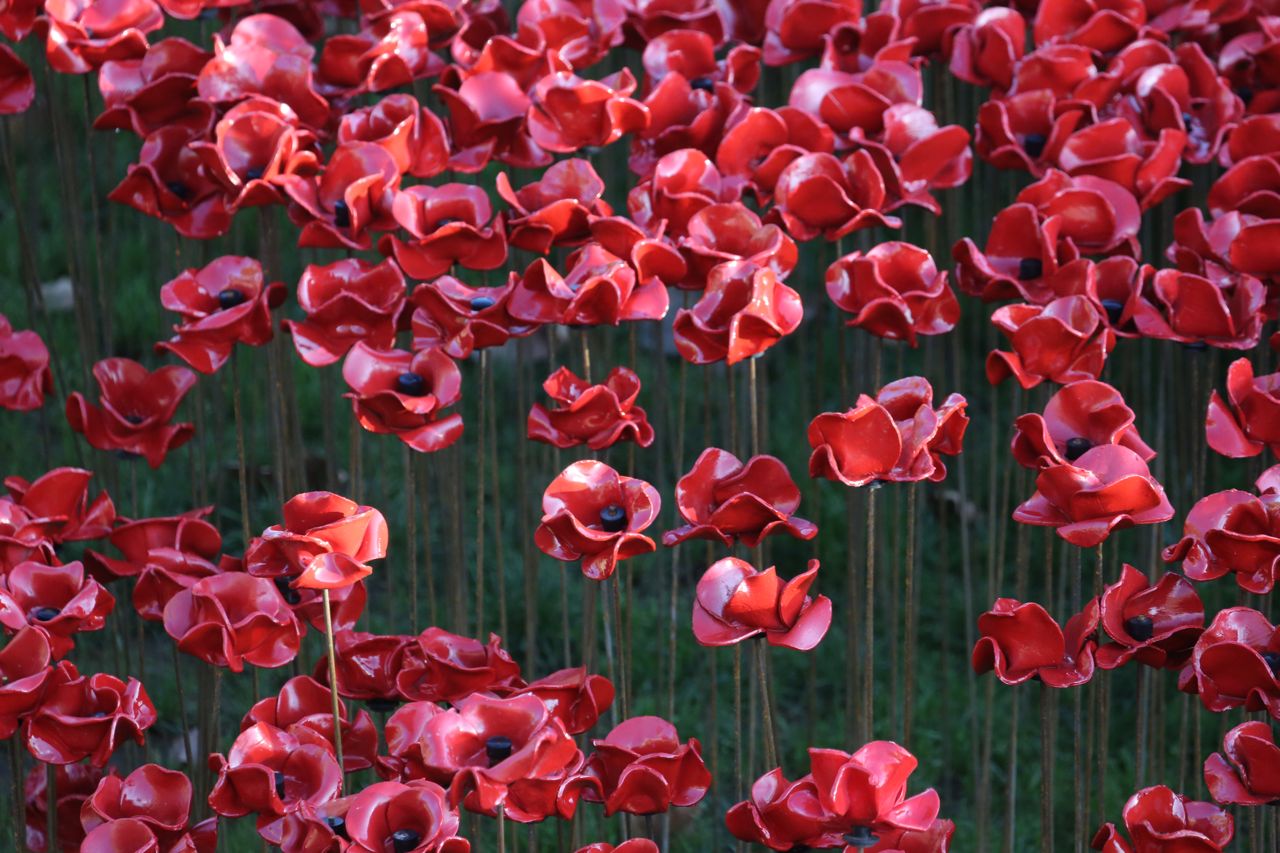 The poppies were individually sold for £25 each, and after the 11th, they'll be "picked" and shipped to their purchasers. The money goes toward six charities that serve veterans. I wish Dave and I had had the foresight to buy one! They're all sold now. 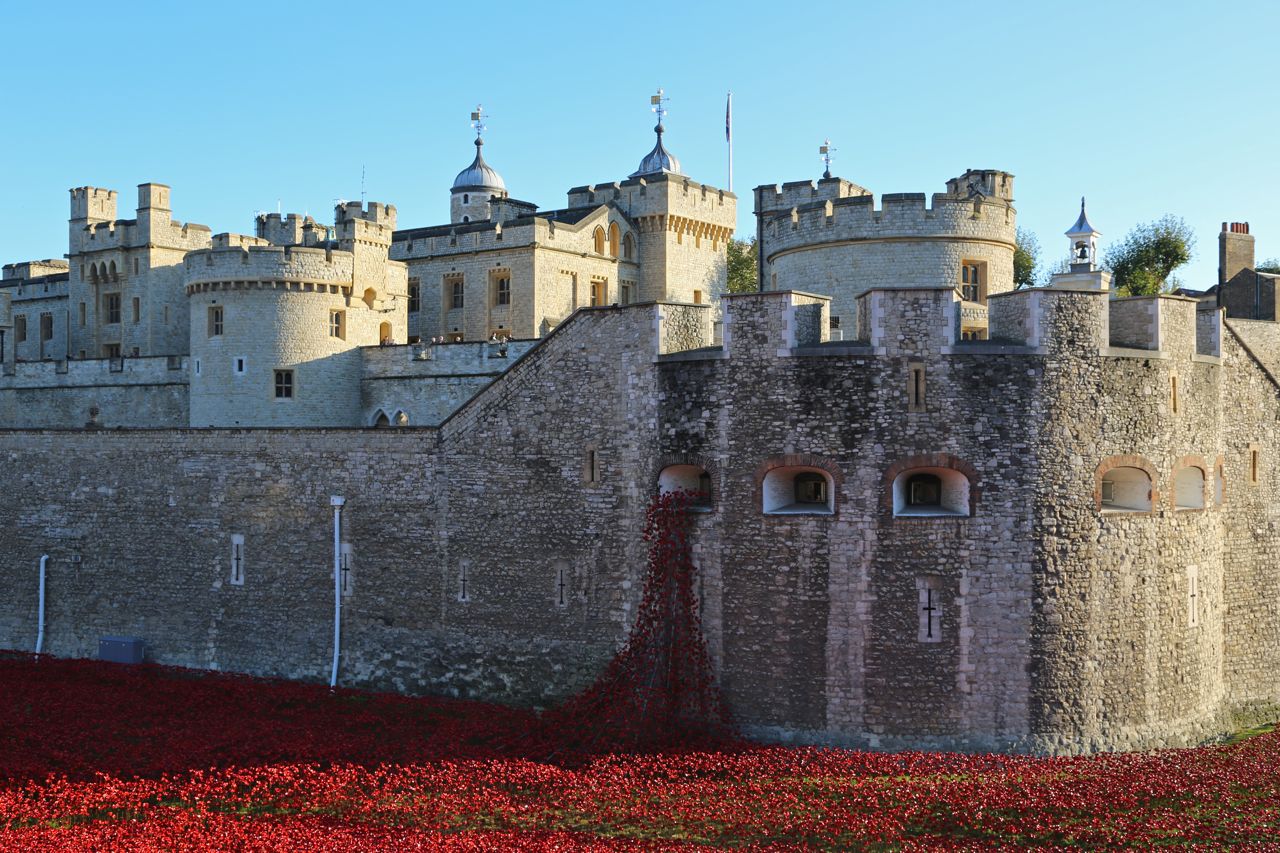 It is a simultaneously beautiful and eerie exhibit -- the bright red filling the moat, pretty in an abstract sense until you think about the carnage it represents. 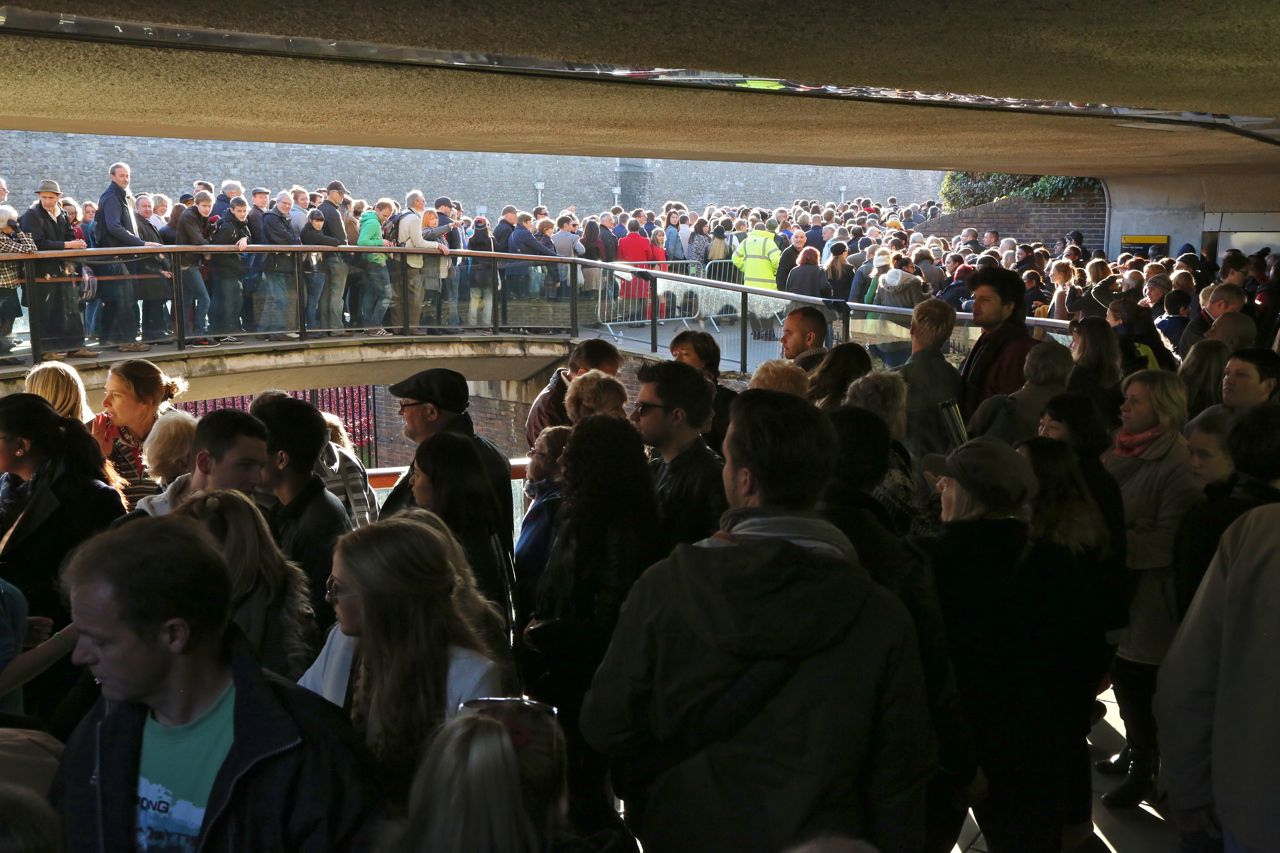 Because it was the last weekend, the place was mobbed. I've had the exhibit on my radar all the weeks it's been there, but other things always seemed to intrude on my plans to go. Hence, we suffered the crowds, which although dense and slow-moving were very well-behaved. (I was astonished to see many people pushing strollers through that gridlock!) 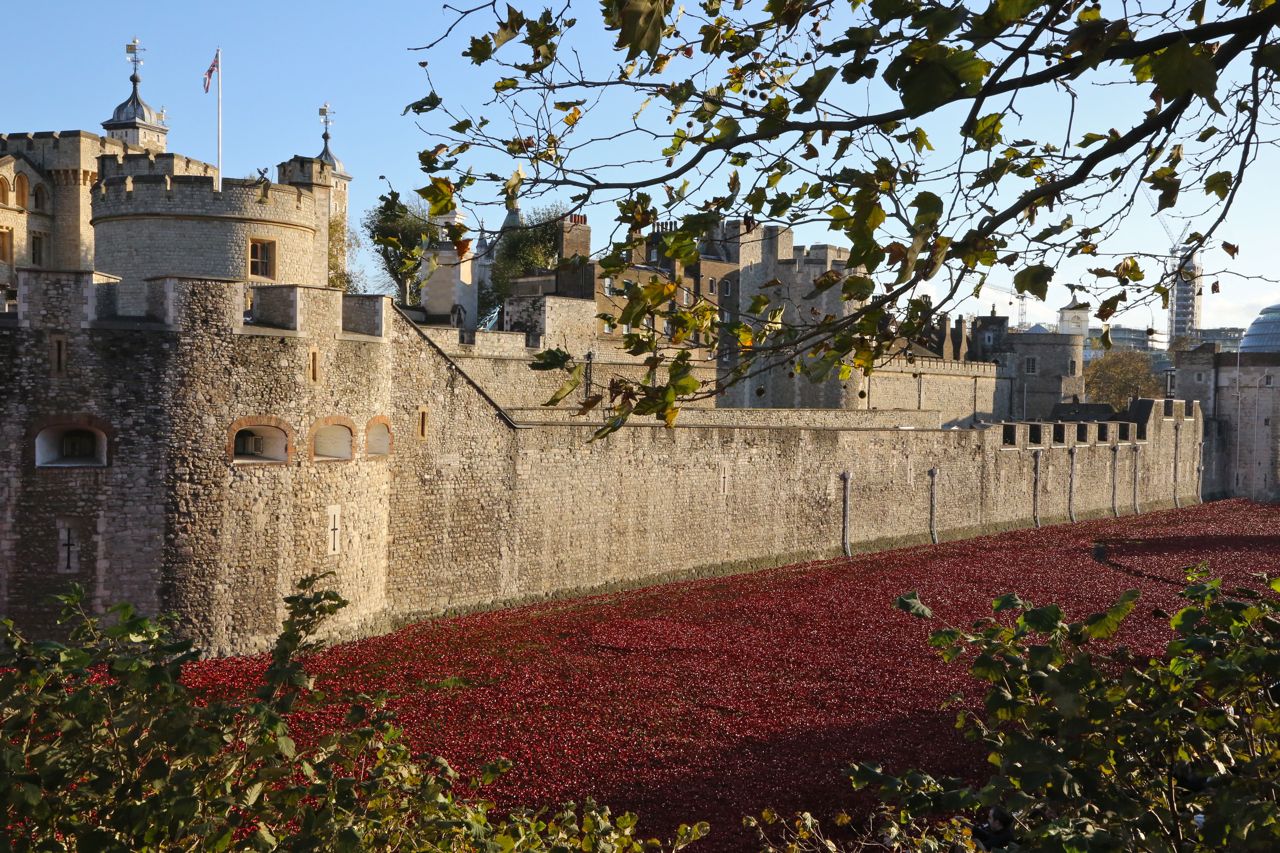 We didn't stay long -- just long enough to walk along the edge of the moat and shoot some photos.

Afterwards, we ran an errand on Regent Street, one of the main shopping drags in the West End. We bought Dave a black suit to wear on stage while he conducts the band -- replacing the old black tux he's been dragging around for 20 years. Dave also bought us each a small paper poppy to wear in our lapels -- an annual British tradition for Remembrance Day -- and then I promptly lost mine while running to cross a street. Oh well.

Then Dave headed home and I met our coworker Lorraine for dinner (Welsh rarebit!), and to attend a choral concert that included another of the music teachers at school. The concert was also themed to remember veterans. It's that time of year.
Posted by Steve Reed at 6:26 AM

I've seen other photos of this display but, your photos are simply superb, the best I've seen. I especially like the last one and I enjoyed seeing the close-up of the poppies. I wondered what they looked like individually.

I have so wanted to come down to see the exhibit..it looks bloody amazing

It's amazing. I can't even imagine what it took to make over 800,000 of the same thing. I would have gone nuts. the guy probably hates poppies now.

The sight and thought of all of those poppies makes me want to weep for humanity.

What a beautiful commemoration, although like Ms. Moon, they make me want to cry for all the loss and tragedy of wars.