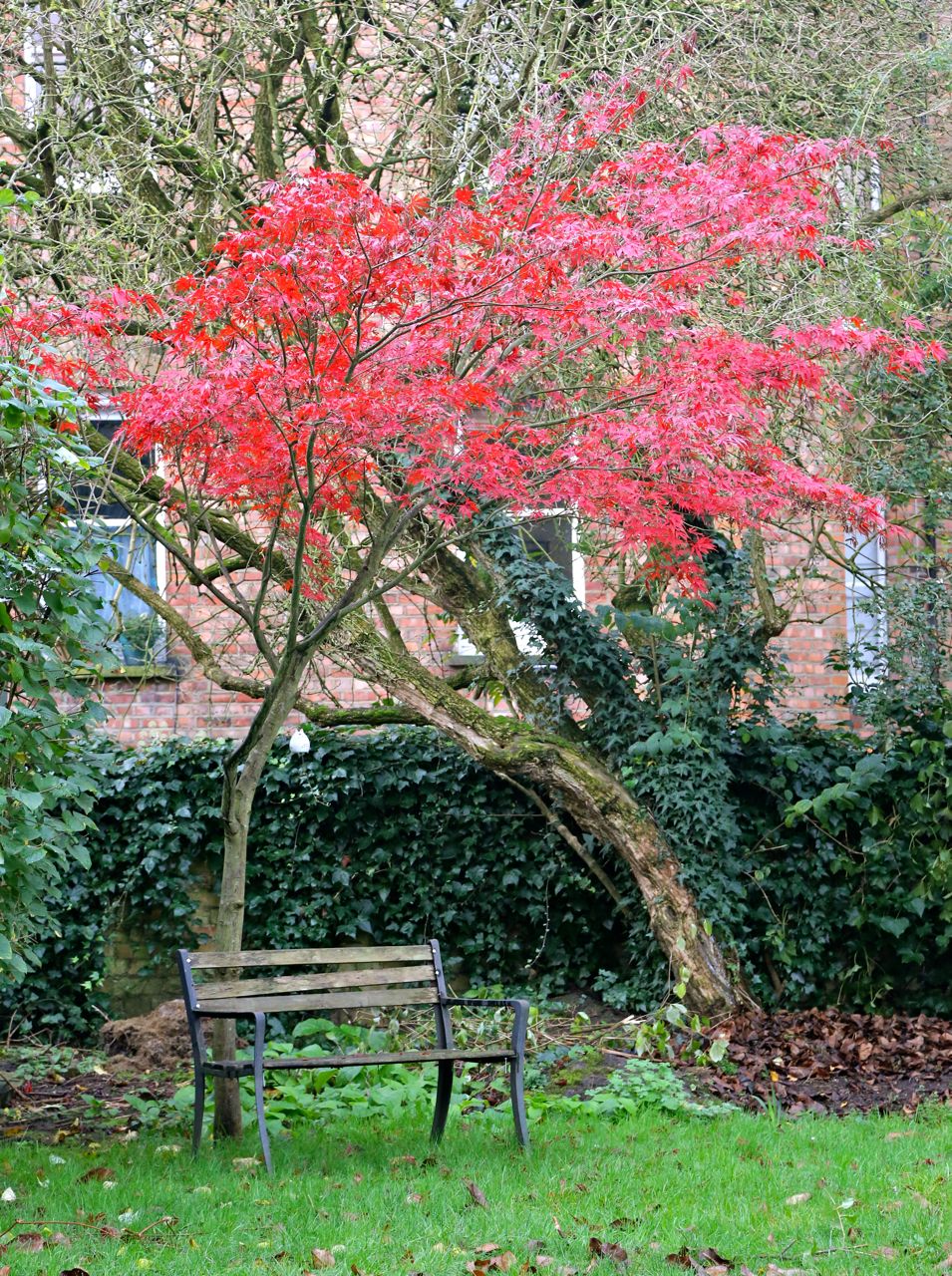 Because yesterday was very domestic -- a foggy walk on Hampstead Heath with Olga, followed by housecleaning, laundry, reading and movie-watching -- here's a post with a few domestic photos.

The Japanese maple in our backyard has turned spectacularly red. It seems like just a few days ago most of it was still greenish bronze, and Dave and I were looking at a few red leaves on the uppermost branches and saying, "I wonder if the whole tree will turn that color?" Et voila! It has. 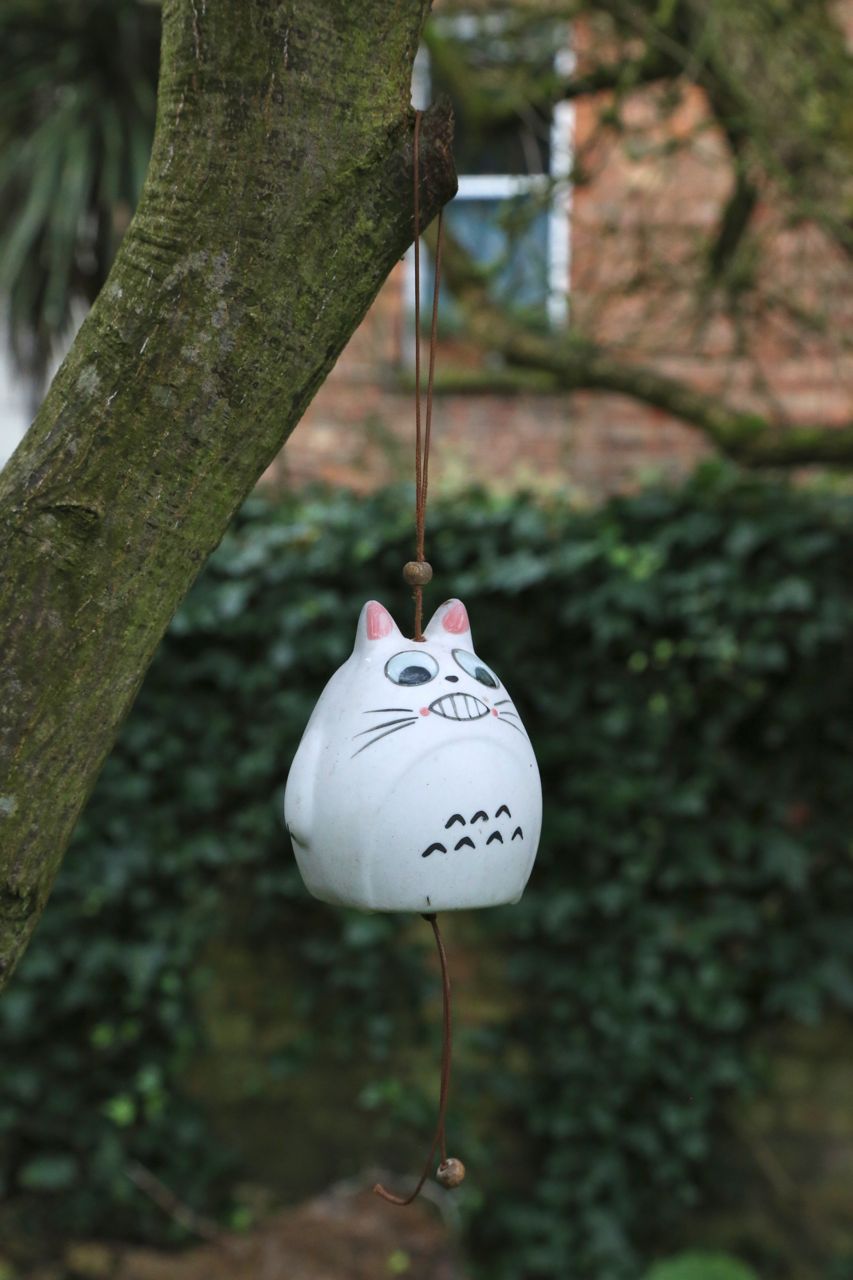 Our little Totoro ceramic bell, which we found hanging alongside other whimsical bells outside a shop in Shanghai, lives in the Japanese maple -- which is only sensible, since Totoro is a Japanese forest spirit. 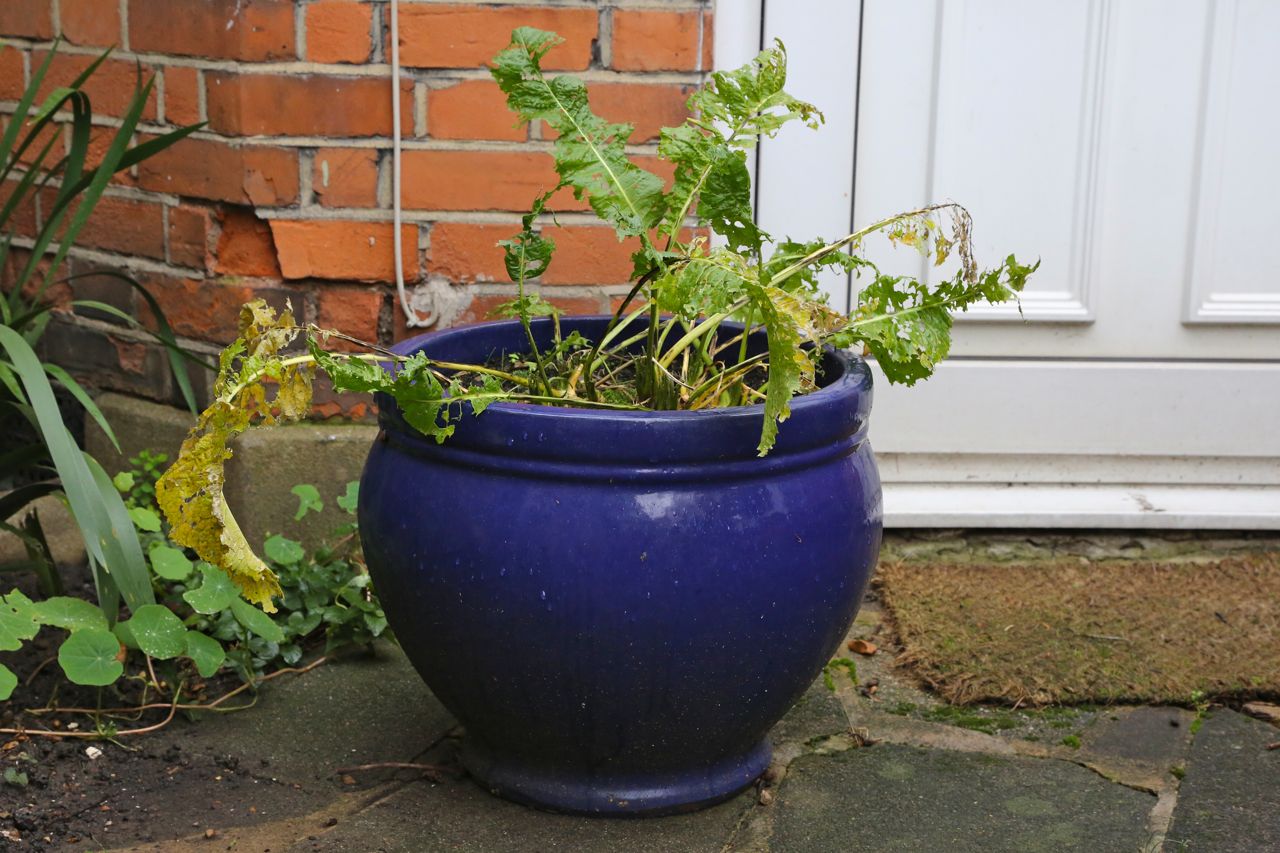 The horseradish, meanwhile, is looking sad these days -- a far cry from its ginormous state two months ago. In addition to dying back for the winter, it has been gnawed within an inch of its life by a variety of critters.

I spent yesterday afternoon and evening watching movies, beginning with "By the Bluest of Seas," the Soviet movie from 1936 that I mentioned recording from television. Two sailors wash ashore in the Caspian Sea at the "Lights of Communism" collective farm, where they vie for the attentions of the same girl. As a movie, it was technically terrible, with some seriously haphazard editing, but the lead actor was hunky and as a cultural artifact it was fascinating. I moved on from there to a mini Ally Sheedy film festival, with "Maid to Order" and "St. Elmo's Fire," and finished with "Footsteps in the Fog," a British melodrama from 1955 starring Jean Simmons and Stewart Granger. (I just mistyped it as "Footsteps on the Dog"!) Somewhere in there I made an omelet for dinner.

Dave comes back today! The solitude has been nice but I miss him and I'm ready for a return to normalcy.
Posted by Steve Reed at 6:25 AM

I watched two hours of the HBO mini series "Olive Kitteridge" last night.
Dear god it's sad.
I guess it's really good. Bill Murray was in it.
I think I'll go make an omelet.

Agree with Mx. Moon, Olive Kitteridge is so worthy! It did not hit me in the "sad" zone , however. Glad Dave has returned, safe and sound.

I've never even heard of "Olive Kitteridge." I am out of the cultural loop! We're just getting "St. Vincent" in a week or two, so we'll go see that, hopefully.

my horseradish is also looking sad. it's always good with the other comes home.

Ooh that guy IS hunky!