Olga's Day in the Sun 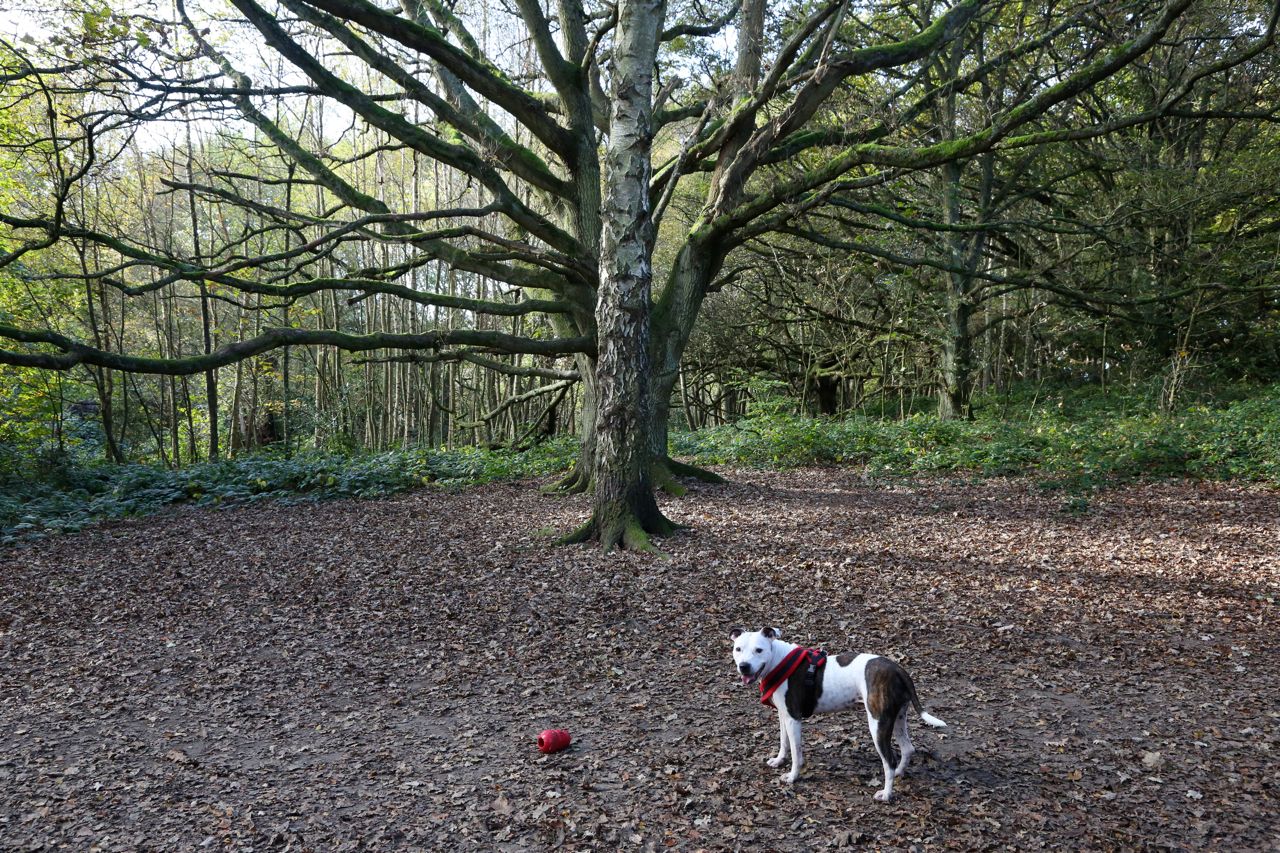 Olga finally, finally got a long outing with me in Hampstead Heath yesterday. The weather was a bit gray when we set out -- gray enough that I tucked an umbrella in my bag -- but before we even got to the Heath the clouds had magically dissipated and the sky was bright blue. 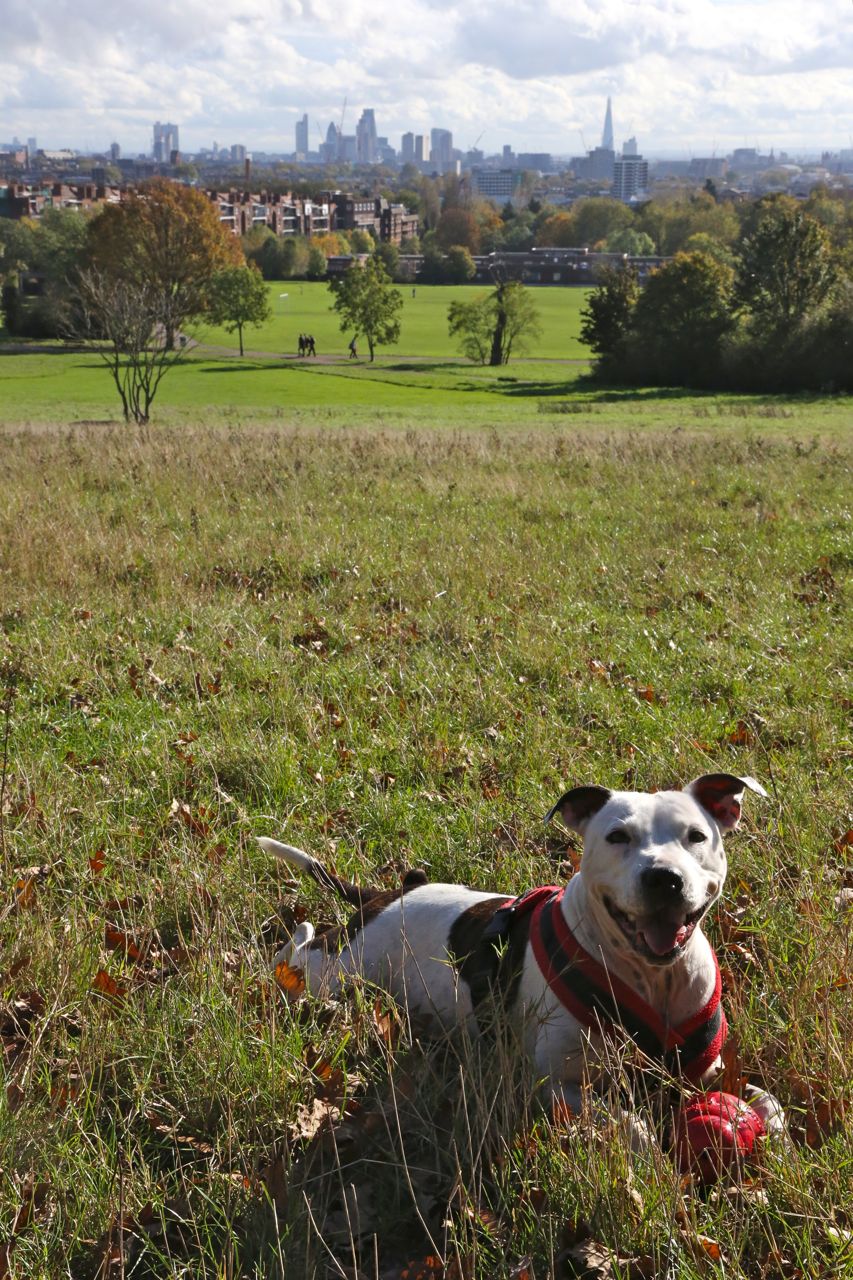 We walked all the way around the park, from Parliament Hill with its skyline views to the quiet woods around Kenwood House. 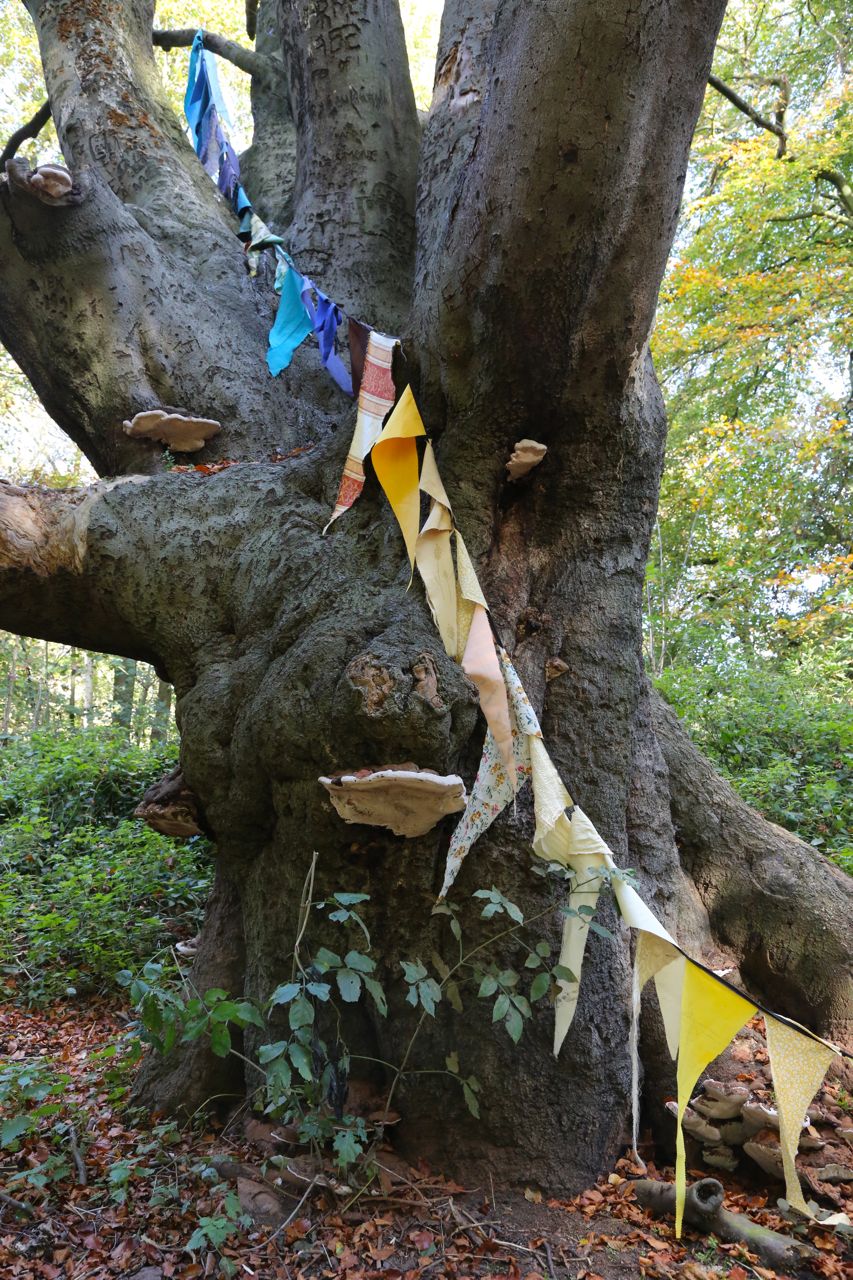 We saw signs of the strange magic that sometimes shows itself in Hampstead Heath, like a forgotten series of bright fabric flags... 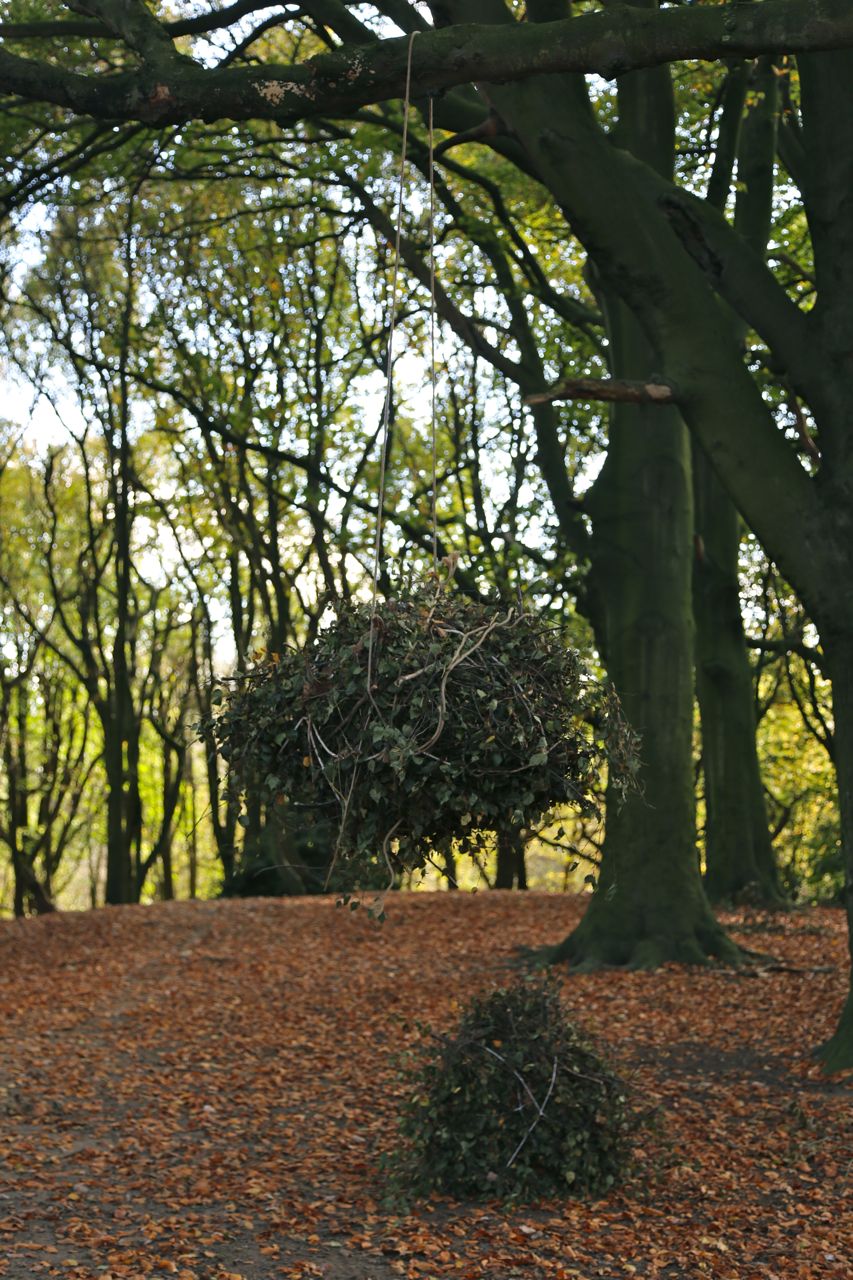 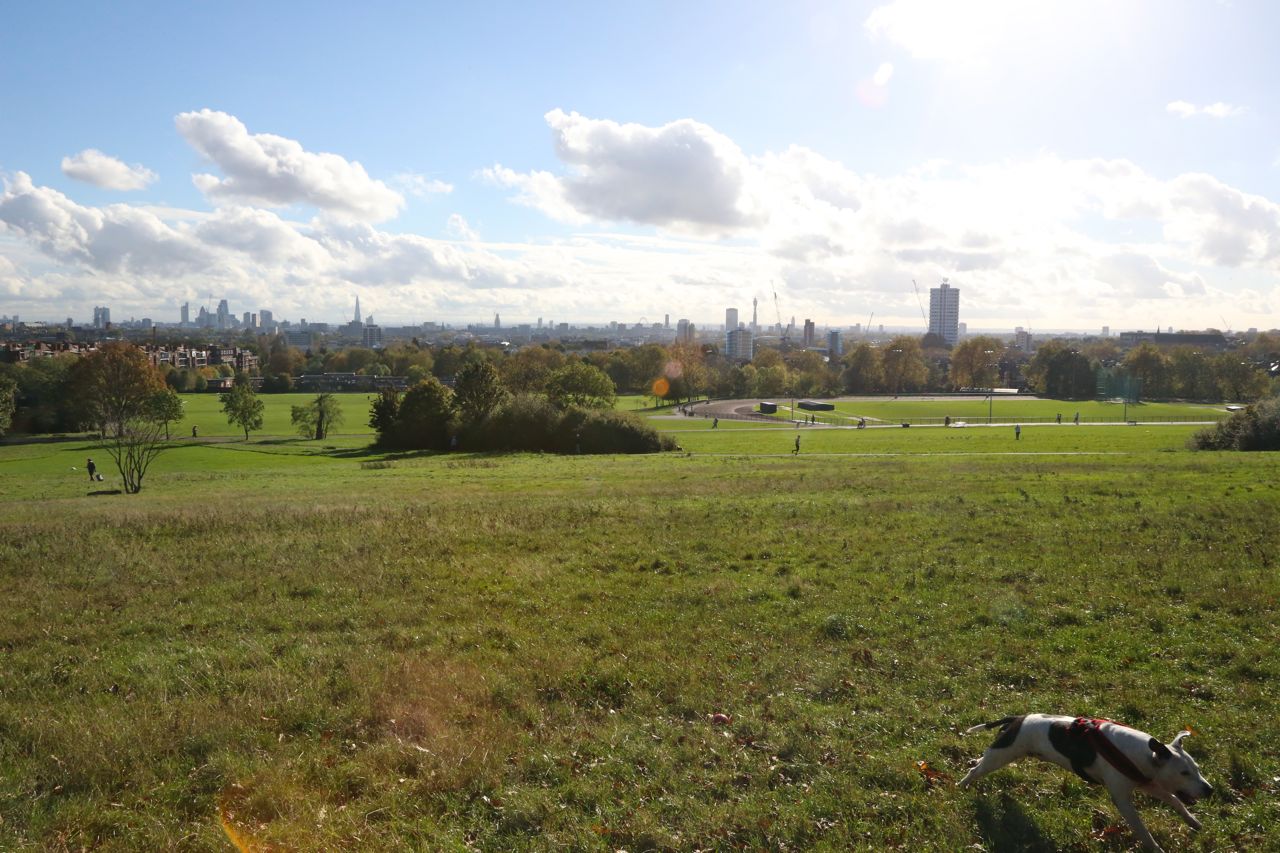 Someone was completely blissed out by the sunshine, the crisp air, the hours running off leash after squirrels real and imaginary. Oh, and Olga had fun too.

Then Dave and I left Olga to snooze in the evening, heading out to Covent Garden for the Bleeding London wrap party. I discovered yesterday that I made a terrible mistake -- the photos I chose to be printed were actually part of an exhibit shown Friday night at a prep school. They weren't for the party at all. So basically, I missed the first exhibit of my printed work! I couldn't believe it.

The party was fun anyway, though, and there was a large TV screen showing a rolling series of BL photos. I could only glance at it now and then because I was simultaneously having conversations with people, so I only saw one of my own shots -- but there was enough evidence that when it comes time for an exhibit and/or book, we have lots of good options.

There were also tons more people in costume on the tube last night. This is like the zombie Halloween that wouldn't die! Whatever I've said about the British not being big on Halloween, I now hereby take it back. I saw hordes of trick-or-treaters in St. John's Wood on my way home from school Friday -- probably lots of American expats -- and Dave said one person even rang our doorbell. We've never had trick-or-treaters in London and didn't prepare at all, so Dave hid at the back of the house and they went away. We have not yet been egged!
Posted by Steve Reed at 7:02 AM

Olga looks ecstatic - and what a terrific area to run.
Sorry your prints weren't included but it sounds as though some were part of the show. You had posted so many interesting ones I can't imagine how you chose.

looks like a wonderful park. it's fun to come across 'strange magics'. on my vacation, one of the beaches had flowers strew about and some white sheer fabric on the sand. remnants of a wedding I suppose.

I guess Halloween in London pretty much depends on where you lice. sort of like here. we never get trick or treaters out here in the country and there were many years we didn't get any in the city and when we did, only a handful or so.

surely the exhibit at the prep school is still up so you can see it.

What a beautiful day! Plenty of sun and magic and joy for Olga!
But damn, I'm sorry you missed the exhibit.

the strange bush things sort of give me the creeps...having watched True Detective last season, I am suspicious! I would love to tap into your energy! You go all day and have enough spark to go out in the evening, WOW! to be that young again...Congrats on the exhibit that you missed...your photos are so wonderful , all of them...just choosing a few dozen would be difficult!

Happy Birthday! I hope you are having a great day.
I think you should frame that photo of Olga on Parliament Hill.

Happy Birthday! I hope it was enjoyable...

Your birthday? Hope it was happy. Olga looks like she's in heaven. I really do believe she is meant to be yours. You understand each other so well. Sorry you missed your photos in the exhibit but will you be able to see them at another venue? I hope?