A Tale of Two Houseplants 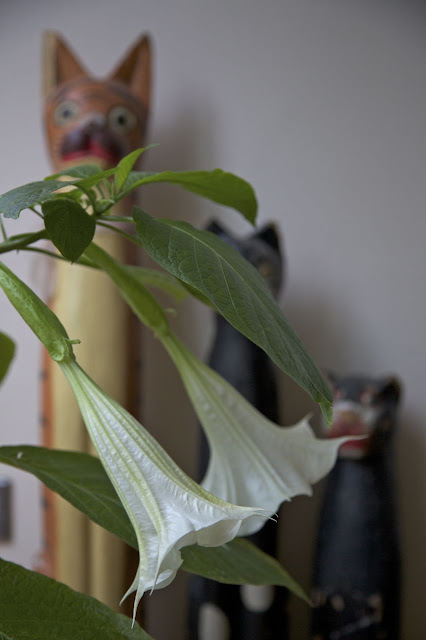 Our other two Brugmansia blooms have opened. Wabi, Sabi and Bobby are impressed. Dave said the flowers are supposed to have an "evening scent," whatever that means -- they do indeed smell very faintly and lightly, with a hint of lemon.

This is a distraction from today's post, though, because our Brugmansia is not one of the two houseplants I mean to write about.

Instead, I'm writing about my last remaining houseplants from my former life in Florida. They're at my mom's house now, sitting in the leafy garden outside her front door in clay pots. They moved there when I moved to a tiny, dark apartment in New York City in 2000.

One is a Rhipsalis cactus, which was given to me when I was a child by a woman named Mrs. Kirkland. She worked for my mother around the house, and cared for my brother and me when we came home from school each day. I always struggle with what to call Mrs. Kirkland. She wasn't anything as transient as a babysitter, or as focused or fussy as a nanny. She was basically a surrogate grandmother, and although she didn't live with us, she was with us every day for many years.

Anyway, she was very into gardening, and she was definitely responsible for teaching me a love of plants. She called this Rhipsalis a "Bird's Foot Cactus." (I couldn't find it online under that name, so maybe that was just her name for it.) 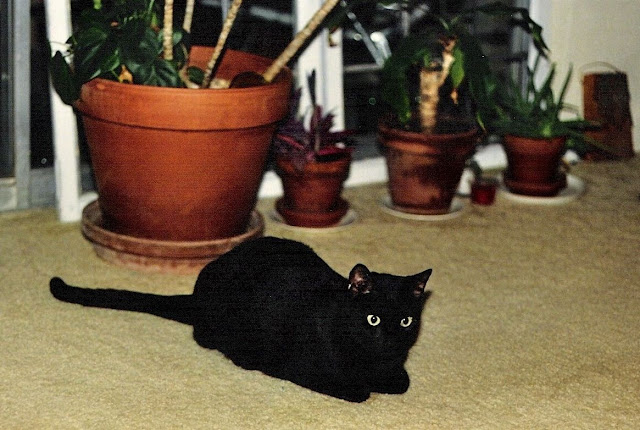 Also outside my mom's door is my Purple Heart, a common purple-leafed plant that many people confuse with the similar Wandering Jew. I got my Purple Heart when I skipped school one day around 1983 and went into downtown Tampa with some friends. We walked around the city, exploring, and I picked a sprig from the landscaping that was growing in the median of Ashley Drive, one of the main streets through downtown. I rooted that sprig, and it became my plant.

The picture above, from the late '80s, shows my purple heart plant behind Calvin, who belonged to my college roommate, Robert. Calvin, of course, has been dead for years, as have most of those other plants -- the tree in the big pot on the left was ultimately planted at my mom's house and continues to grow there (as you can see here). In fact, even the apartment building where I took that picture has been torn down.

Which is kind of what this entry is about. I've been wrestling with what to do with these last two houseplants. I initially planned for my brother to take them and put them in his yard in Jacksonville, but he never picked them up, distracted no doubt by his own obligations. (I don't blame him at all!) For some reason I didn't move them myself when I was there in August. Yesterday I came up with a plan for Mom to give them to a neighbor, so I could pick them up and take them to my dad's house when I visit in December. (Even though Mom says the Rhipsalis is pretty much dead, having been dug out of its pot by some animal.)

And then I thought, "Why?" I can't bring them back to England. Even bringing a sprig to root would be a customs violation, I'm sure. The best I could do would be to move them to someone else's yard.

I think, instead, I should just let them go. There are lots of plants from Mrs. Kirkland around our house -- the Florida orchid tree, the pine-cone lilies, the florist's ferns. They're all going with the house. Perhaps these should too. They're where they belong.

I think I've spent so much mental energy on this because, as I told Mom, it's transference -- it's really about losing the house. It's about giving up so many links to our past through the sale of this property.
Posted by Steve Reed at 7:35 AM

Well, to be fair, it is pretty amazing to keep a plant alive for that many years. I understand your reluctance to let them go. I have a few like that...

I think its bothering you more than you want to admit, the sale of the property.I have no problems putting those smarmy plants in the corner of my backyard if you want me too.

I have a plant that was given to me when my daughter, first child, was born. it's a dumb cane I think. it has been big and small and neglected and left out in the winter and froze back but it always came back. after the move to the country house and even more neglect, I finally brought it out here when we sold the property last summer. it's a bare sprout right now but I am nurturing it again. so I've had this plant for 38 years. After my family home was torn down, I used to dream about it being in an abandoned derelict state with the pool in the backyard icky and full of green algae and I was coming to live there again.

It would be sad to loose your Rhipsalis, You could put a clipping of it ( or many) in wet paper towel in baggies and send them to your self in England, along with socks or something. I do not think they have Rhipsalis sniffing dogs, yet. I have one- though did not know the name until your post- and have had it for over forty years, it has bloomed once, on the first anniversary of my mother's death, first day of spring, has not bloomed since. I think it is an enchanted plant! My friend brought it back from South America so long ago. He had one that lived nearly as long as mine in the most negligent circumstance- he rarely watered the poor thing and it grew to be one long tendril stretching though the kitchen in search of water. It died when he died just this year. They are hearty and loyal- try sending some to yourself in the post, see what happens. They are special!

It can be hard to figure out just what is driving us sometimes. I have a simple ivy plant that was just a sprig in a bottle of water, left in my first apartment by the former tenant. It has always grown well but it's not a good plant to have with cats in the house, so I have kept telling myself it must be put out on the compost. I can't bring myself to do it. It's been with me for 39 years. What the heck? Does length of ownership make it more precious? No. I think it's just that it recalls for me that first apartment and my first real independence. Thanks for this post, because now I see I don't need to hang onto it anymore.