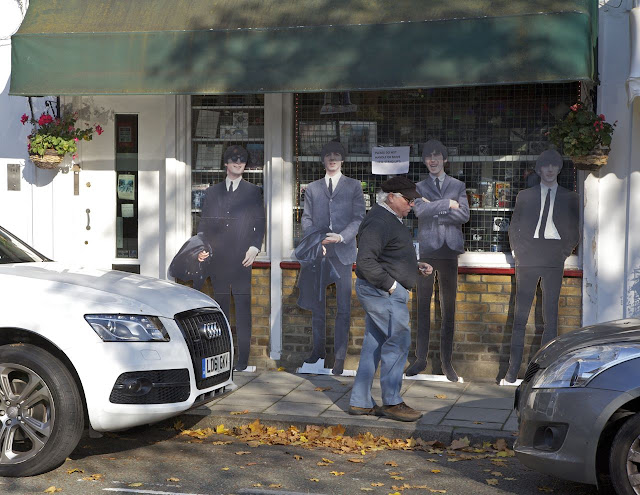 I had a dream the other night about a big white sea turtle. It looked sort of like Olga, or maybe a Holstein, with big dark spots. But it was definitely a turtle, with flippers and limpid sea turtle eyes. It liked being scratched, like the tortoises in the Seychelles. I think the turtle and I were in our back garden.

I remember waking up and thinking, "Wow. I need to write that down." And then I didn't and now I don't remember what happened.

But it's just as well. In my experience, writing down dreams isn't really all that productive. I used to think dreams meant something, and I'd record them in my journals, but going back and reading them is often pretty tedious. I think they can be expressions of our thoughts and emotions -- our subconscious mind -- but often they're just neurons firing rather randomly as we're in the process of waking up. Don't you think?

Anyway, I can't imagine what the presence of a Holstein sea turtle should tell me about my subconscious mind.

Yesterday was our big dress-up day at school. Most of the kids were in costumes, even the high schoolers, and there were activities and competitions. I fully intended to wear my black Salad Fingers t-shirt, because he's pretty darn Halloween-ish, but then I raced out of here yesterday morning as usual and didn't remember the season until I was on the tube. Oh well.

In fact, we have failed to prepare for Halloween in every respect. I asked Dave to grab a bag of candy at the store in case we get trick-or-treaters (there are small children living upstairs), but he forgot. I suppose we could buy some today, but more likely we'll huddle together in the back of the house with the lights off.

It seems like every year Halloween becomes more prominent in Britain. There's even concern that it's overshadowing Guy Fawkes Night, or Bonfire Night, which is coming in just a few days. (We're already hearing fireworks each night. Olga is not a fan.) When we first moved here in 2011 we didn't see much evidence of Halloween, but this year I saw TV commercials touting candy and costumes. Another commercialized holiday export from America!

(Photo: The Fab Four outside a souvenir shop in St. John's Wood. I believe that's the proprietor walking in front -- he'd just locked the shop door.)
Posted by Steve Reed at 6:23 AM

I've been known to hide with the lights off on Halloween too. Thankfully on our little street we don't have many kids.

My apartment is pretty kid free so I think I'm safe but, I will get a small amount of candy just in case. When I visited "the crossing" two years ago (has it been that long) some guy gave me a flyer about a Beatles museum that he said was just down the road. He was really trying to drum up business with everyone who came by the corner.

Over the course of thirty years visiting in Cozumel, I have noticed that Halloween is becoming more and more popular. I doubt it is overshadowing Day of the Dead yet, but it's definitely a bigger thing now than it was.
People just like to dress up in costumes, I guess. And candy is always good. And it's the one holiday that doesn't make me feel guilty about something so it's fine with me.

That dream makes sense to me. We've lived for a couple of years in Seychelles more than 20 years ago and I still have vivid dreams. Tortoises feature often, as do geckos and cockroaches and giant millipedes.

They're big into Halloween there and St Patrick's Day - Irish missionaries have left their imprints.

Any reason for fancy dress will be popular! Always loved Halloween but it has changed so much here. And I have outgrown it I am afraid, I just halloween and fancy dress when ever the mood strikes. (loved the article on Fb re: middle age, by the way!) Salad fingers of course a fave in this house ! Poor Hubert Cumberdale does not taste very nice...but we all love the red water when it flows! Thanks for taking me back to when the boys were here and so much fun! All stuck into lives and jobs now...boo hoo, Thanksgiving without the kids...more boo hoo! Jealous of your holiday with the tortoise .

even when I lived in the city we rarely got trick or treaters and when we did never more than a handful. out here in the country I haven't seen a single one.

We're gearing up for a crowd here - although I think last year we didn't have as many kids as usual. Mike loves to dress up & hand out candy - and he's VERY generous so we usually run out.

That salad fingers is CREEPY! Ha!

P.S. Last night I dreamed that I was stuck at the office because I locked my keys in my car. While I was trying (& failing) to call AAA, they moved someone else in to share my office. She had a fire extinguisher in a bucket under her chair & while she was out it caught on fire. I doused it with water from my water bottle, all the while wondering, "do you put water on a fire extinguisher fire?"

We are having a pretty good run of kids trick or treating tonight - mostly in zombie costumes. They are all under four feet in height, so I'm hardly scared at all :)

I wish that I remembered my dreams more! I think they're fascinating and certainly reflections of different parts of ourselves as well as a sort of collective unconscious.

Halloween was sort of a wash in my neighborhood, and I felt entirely disconnected from it. My boys are older, and while they dressed up, they went to parties instead of trick or treating. I ate a few Kit Kats and felt sick afterward. God, those things are SWEET!

Lynne: That's pretty much what we did!

Sharon: I'm not aware of a Beatles museum. It might have been this guy! He runs a shop called St Johns Wood Collectibles about a block away from Abbey Road, and it's full of Beatles stuff.

Ms Moon: Yeah, as holidays go it's not so bad, but I wish we weren't so thoroughly Americanizing the entire planet.

Sabine: What a place to live! Wow! We loved it there.

Bug: I am always impressed at the detail with which some people (like you!) remember dreams.

Jenny-O: Nah, she doesn't mind. She's used to it. We compare her to a cow all the time, and call her the "bovine croissant" when she curls up on the couch.

Elizabeth: Well, undoubtedly dreams are related to our experiences, since they have to draw from those. But I've never been certain they're all that significant. And yeah, Kit Kats are intense! Candy in general -- I don't know how I used to eat so much of it as a kid. Bleah.