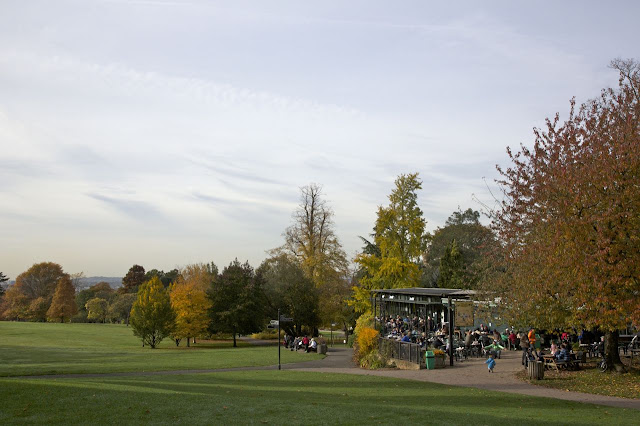 We had some excitement nearby yesterday -- a pretty big fire around the corner on Finchley Road that damaged several shops and forced the evacuation of a few dozen people. Apparently it began in the early morning, which is weird, because I walked the dog before leaving home at 8:30 a.m. and I knew nothing about it.

But on the way home last night, I found traffic backed up on streets all through our neighborhood and a haze of plastic-smelling smoke filled the air -- so I knew something was up. I'll walk to work that way this morning and check out the scene. 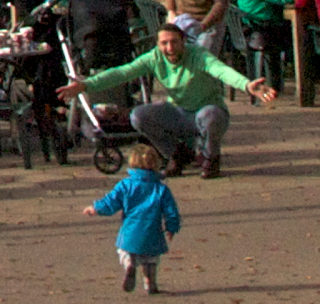 Some secondary excitement came when someone rang our doorbell about 7 p.m. Dave and I looked at each other quizzically, because no one ever rings our doorbell out of the blue, unless they're a huckster of some kind. Sure enough, Dave opened the door to a tearful guy with a sob story about just getting out of prison (!) and wanting money to go see his daughter and, oh, would we buy this pack of three dish towels for £19.99?

Dave offered him a few pounds as a donation, which is more than I would have done, but he was insistent that he wanted to sell something. So Dave said sorry and closed the door.

"Can I still have the donation?" said the guy from the other side of the door.

We didn't open it again.

It's actually a pretty good sales gimmick to say you've just gotten out of prison because then people are slightly scared of you and what you might do. Any day now, I predict, our house will be burglarized.

(Photos: Golders Hill Park, on Sunday, and a tiny detail from the same shot.)
Posted by Steve Reed at 6:11 AM

We get those here a lot. I do not open the door either.

You can get arrested for taking pictures of small children! (But maybe not from that distance!). I love the word "huckster" and shall start to use it. If someone comes to my door I will say, "Go to hell you damned huckster!"

I don't know. A guy who just got out of prison selling dish towels? How bizarre.

oh my word...this caused me to laugh out loud at work...we get people asking for gas money..sure...i just say sorry and move on.

when we lived in the city and a stranger knocked on the door, I would open it just enough for me to exit and then close it behind me and engage the person outside. never let them see in (not that we had anything worth stealing being hand to mouth artists), not even the kids with official badges selling stuff. now out here, no one ever comes to the door except the occasional neighbor or delivery person.

Oh goodness, I hope not.

Lots of fire and creep this morning, Steve! I hope the rest of your day is uneventful --

I don't open the door. Period. Mostly because I just got out of prison and I sell dish towels for a living and I hate competition. But that's just me.

I hope you don't get burgled. How is Olga at being a guard dog? Would she lick someone into submission?

next time open the door with olga at your side. how are they to know she's a sweetheart?