Brugmansia and a Big Fish 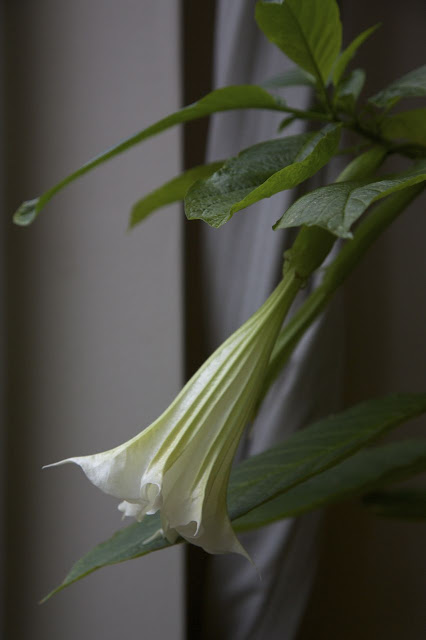 Here's the newest exotic plant to be blooming in our midst -- a Brugmansia, or trumpet flower. Dave bought this plant as a tiny sprig and initially put it outdoors, but it was quickly swallowed up by the verdant greenery of our more robust temperate species (the English ivy).

So he moved it to a pot, and it's now growing near the avocado in our living room. It's endured a couple of spider mite infestations but otherwise seems to be doing much better indoors. And yes -- it's blooming! It has this flower, its first, and two large buds that should open any day now.

Dave said he thought he bought one with orange flowers. But we've found that plants we ordered from one particular web site often don't match their descriptions.

In other news, I heard back from the Italian photographer I mentioned in yesterday's post. Her response: "Nobody said this is my picture, it was just put as background (but not by me) by he ones who organized the event. Sorry! talk with Dub Vibes!"

While that may be technically true, I would say using a photo in publicity materials for a photography show certainly implies that the photo depicted is part of the show. Don't you think? Anyway, I'm leaving it alone. The event was months ago and I can't do much about it anyway. I'm not so concerned that I want to make a stink.

My foot is doing better. I think it was just a temporary strain of some kind. My initial suspicion was plantar fasciitis, but if that were the case I'm not sure it would feel better this quickly.

Oh, and I arranged dog care for Olga during Christmas. In the end, I went back to the dog boarding place we used in Notting Hill, even though it costs an arm and a leg, and the woman who runs it always makes me angry. I just couldn't find anywhere else with any availability. I think they take good care of the dog, which is what counts, I suppose. 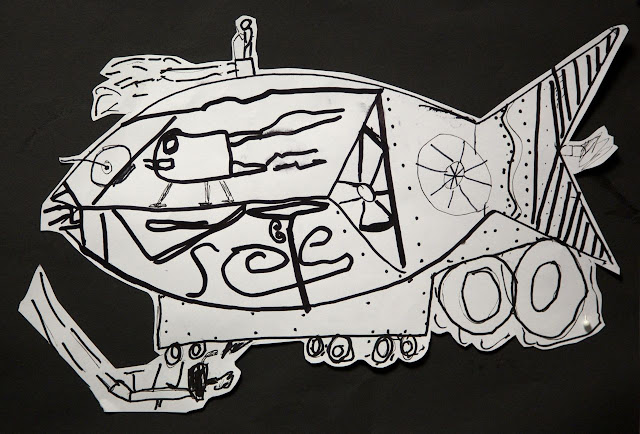 Finally, here's a fun drawing from the art bulletin board at school. All the kids began with the outline of a fish, which most of them decorated with fins, eyes and abstract patterns of wavy lines and scales. This kid, however, took his fish in a whole different direction -- a mechanical one, from the looks of things. (Is it a "fish tank"?)
Posted by Steve Reed at 7:02 AM

That kid has it going on! Great fish picture!
I can't believe your trumpet flower is blooming. I have one planted outside and it NEVER does. Good for you!

I love the fish picture. Very creative. And, I love the trumpet flower. Quite spectacular.

I think using your photo as a background to draw viewers or visitors does recognize your talent. It's a highly interesting photo. But it's also dishonest or at the very least disingenuous, and also rude!

Good care for the pup is the number one necessity. Some people are better with animals than humans.

It's a fish submarine! With a... jellyfish? driver - cool! Glad your foot is better! This summer I worried that I had that too, but I stopped wearing flip flops so much & the pain went away. Whew.

I know several kennels in and around Sheffield. Plenty of availability over Xmas and much cheaper than London. However, the tough Yorkshire dogs would probably make mincemeat of your soft London pooch.

Definitely a fish tank. That kid has imagination, thinks outside the square and will go a long way. I just hope it is not to prison.
Ever the optimist.
Ms Soup

it is weird to use someone else's photograph to advertise another photographer's photo show. if i were the photographer, i'd be insulted. but what can you do.

my angel trumpet finally started blooming. it's been in the ground since early summer of 2014. but once it decided to bloom, it burst into bloom. must have had over a dozen flowers on it. mine is yellow. I have a pink one I planted last fall that got about 2 feet tall this spring and then hasn't grown an inch since.