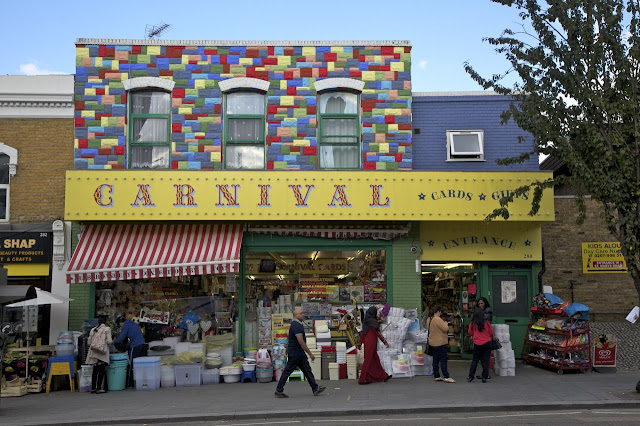 OK, let me clear one thing up right off the bat about Susi's photo of Olga, which I linked to yesterday. Those are NOT my pants. I don't know who that person is, and in fact I didn't even see them when Susi and I went to the Heath the day that photo was taken. Just some colorful passerby!

(I do admit, however, that in the past I've had pants that are just as terrible.)

I got a kick out of David Sedaris' recent piece on gay marriage in The New Yorker. I loved how, until they saw the tax benefits, he and his partner Hugh were so resistant to marriage or even civil partnerships:


"The whole thing felt like a step down to me. From the dawn of time, the one irrefutably good thing about gay men and lesbians was that we didn’t force people to sit through our weddings. Even the most ardent of homophobes had to hand us that."

But what was even better was his description of a fight with his mother when he was a teenager, in which she called him "queer":


"Then I ran down to my room, which was spotless, everything just so, the Gustav Klimt posters on the walls, the cornflower-blue vase I’d bought with the money I earned babysitting. The veil had been lifted, and now I saw this for what it was: the lair of a blatant homosexual."

I completely identified with this. Did I ever show you a picture of my room when I was in high school? 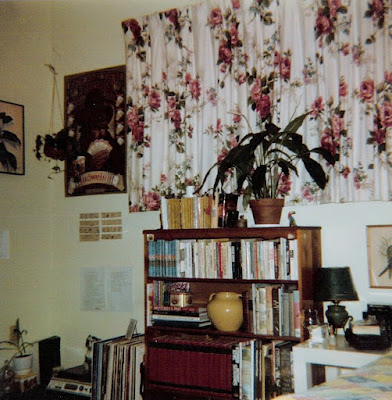 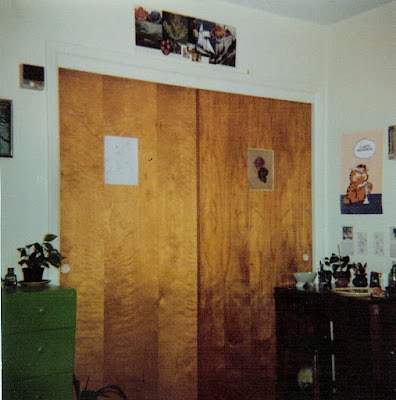 Yeah. My vase was beige rather than cornflower blue, and I had Garfield rather than Gustav Klimt. (As well as a Budweiser poster, my one concession to teenage masculinity and a byproduct of my days as a beer can collector.) But still, same idea. I was a very neat kid, if somewhat prone to clutter.

For the record, I did not choose those curtains.

Anyway, Sedaris and his partner wind up deciding to get married for financial reasons, as understatedly as possible -- kind of like what Dave and I are doing. At least we're having a party, though. We're still debating whether to have rings. When I hear how much rings cost I can't help but think I would much rather spend that money on a trip to Helsinki or Tanzania. I mean, why do I need a ring?

Like all of us, though, Sedaris was "overcome with emotion" when he heard about the recent Supreme Court decision that made same-sex marriage legal across the United States. Of course he gave his feelings a wry twist:


"The Supreme Court ruling tells every gay fifteen-year-old living out in the middle of nowhere that he or she is as good as any other dope who wants to get married. To me it was a slightly mixed message, like saying we’re all equally entitled to wear Dockers to the Olive Garden."

(Top photo: A colorful shop in Leyton, East London.)
Posted by Steve Reed at 6:46 AM

I read that essay and died laughing, as usual, with David Sedaris. He is THE BEST. I honestly feel like he would be my best friend, if only he knew me.

And those photos of your room are priceless. I'm relieved that you didn't pick out the curtains.

Sedaris is a genius ... A woody Allenish genius

well, that made me laugh. and I was gonna say about the curtains that they would have been a dead give away. the fact that you didn't tear them down must have been a clue.

Oh my god. I am so behind in my New Yorkers! I can't wait to read that essay. He's so wonderful.
As are you, Steve.
You are precious.

I am always so genuinely puzzled when people are against gay marriage, because love is love and bullying clubs that aren't open to all are shit, but then again I'm not all that sentimental about marriage either. I always consider the date we got together our true anniversary.

Seems we've all had bad pants in our youth. Someday that person will be talking about his/her bad pants! Hah :)

Love this post. I must go look up the full Sedaris article now.

Fascinating. I must admit that homosexuality is something I know very little about so this post has added to my education. By the way though I am married I have never had a wedding ring. I don't like rings because they tend to catch on things and wearing a ring would interfere with hand washing habits. Also if I were kidnapped by Somalian pirates they might be tempted to chop off my ring finger!

What a tidy, tidy room; cluttered maybe but TIDY clutter.

I haven't gotten to my latest New Yorker yet - thanks for the heads up. David Sedaris is on my list of very, very favorite writers.
I'm fascinated by homophobes bemoaning gay marriage, while heterosexuals are divorcing left and right. It seems the gay community is the only one supporting the tradition.

I loved this peek into your adolescence! It fascinates me the degree to which we have always been exactly who we are, if that makes any sense. i think we'd have been great friends as teenagers! i would have found your sense of order appealing.

Mike recently bought a titanium ring for CHEAP. It looks great on him. There are pluses & minuses to titanium (if it gets stuck on your finger it can't be cut off, but apparently it can be shattered - I would pick a VERY trustworthy individual to wield that hammer!).