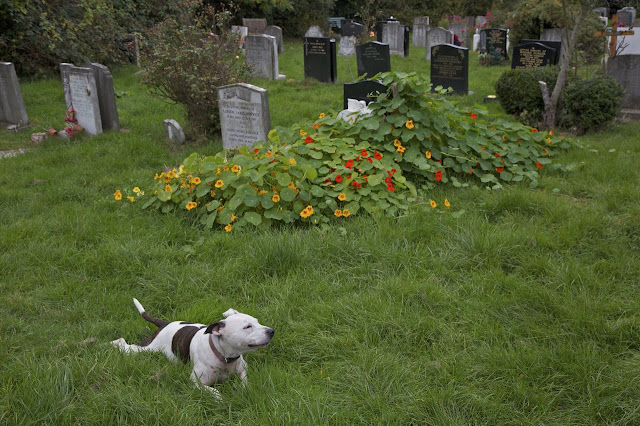 Olga and I were back at the cemetery yesterday, where, as you can see, it's still quite grassy and flowery despite it being mid-October. I love that big mound of nasturtiums. They're one of my favorite flowers, and we never grow them, and I don't know why.

The dog and I had a nice, quiet day. I had French class in the morning, where we were introduced to the futur simple tense, which is different from the futur proche. I still say everything pretty much in present tense. These tenses just blow my mind. I have definitely noticed that I don't memorize as easily as I used to. I have a terrible time with verb conjugations, even the bedrock ones -- j'ai, je vais, je veux, je sais, je suis -- good lord, they all look the same! 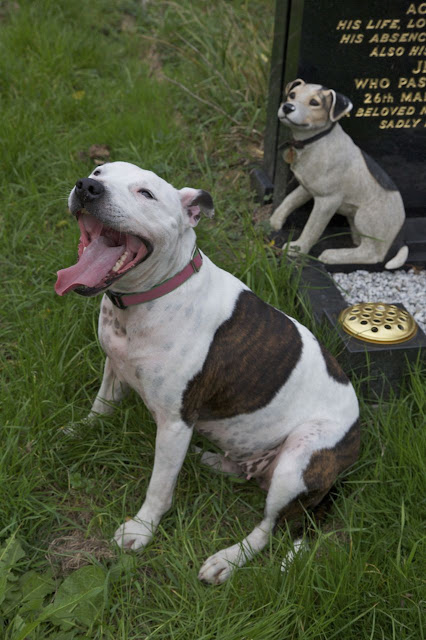 Dave is working with students all weekend. He's trying to help them prepare for honor band selection, first rehearsing and then recording their submission tapes. So in the evening I ate peanut butter and watched "The Eyes of Laura Mars," a somewhat terrible late '70s movie with Faye Dunaway in which a photographer inexplicably begins seeing through a murderer's eyes. How this happens is never precisely explained, which is what I love about '70s movies. They don't bother with details. They just dance.

I got a box from Amazon on Friday -- some tennis balls and a backup Kong for Olga, and a book for me. I wanted a book set in Lisbon to read when we go next month, but quick -- think of a novel about Lisbon. Or Portugal, for that matter. It's hard, isn't it? The only one I could think of, off the top of my head, is "The Night in Lisbon" by Erich Maria Remarque, which has something to do with Nazis. So that's what I ordered. It probably all takes place in Germany, except for, well, The Night. (I could have ordered Jose Saramago, I guess, but I didn't think of him until later.)
Posted by Steve Reed at 7:04 AM