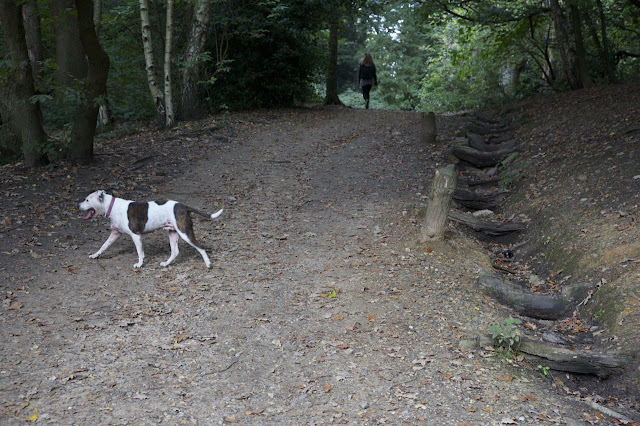 Let me state right away that I am not a paid shill for Google. (I wish!) I wrote about image searching the other day and now I'm writing about another Google product, but I swear it's just coincidence.

Last night I came across something called "DeepDream," a code that Google techies wrote to enhance photos with patterns that it sees and amplifies, partly drawing, as I understand it, on photos it's seen in the past. (The technical stuff is all explained here and here, probably far better than I could explain it.)

Basically, it makes your pictures look like an acid trip. 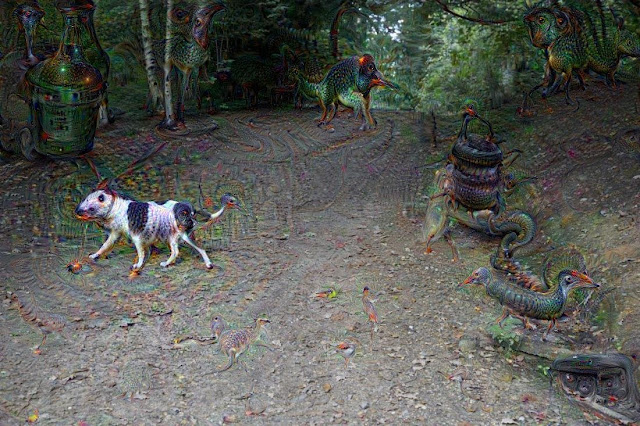 Here's an example. At the top, a photo from a recent walk with Olga on Hampstead Heath. And just above, the same photo after it's been run through DeepDream. Crazy! (Click to enlarge for full, Hieronymus-Bosch-on-shrooms effect.)

I had fun running a couple of photos through DeepDream using this site. But the wildest example I've found is here, a YouTube video that employs the same technology on a scene from the movie "Fear and Loathing in Las Vegas." (So appropriate.) Watch it. You'll be bowled over. If you're like me and you never tried acid or any other hallucinogenic drug, you may feel both sorry and relieved!
Posted by Steve Reed at 7:43 AM

I believe it should be called "DeepNightmare." Holy crap, that's weird!

yah, kinda acid-ish. not mushrooms though. mushrooms are much gentler.

Okay, that was way too strange. You do find some of the most interesting things.

I have now spent almost an hour running photos through that deep dream generator. Truly weird stuff. I'm impressionable enough, though, that I didn't dare run any faces of loved ones or beloved places through that thing. I might do a post later of what I got, and I promise I will credit (blame) you, LOL. It was entertaining, anyway.

Owsley's LSD, the real deal, nothing like these photos really. This effect must be from the idea of LSD mixed with additives , like battery acid, makes it weird and scary. Not a fan but thanks for the link, it can be quite entertaining! Glad you found a place for Olga to stay while you are getting married and having fun without HER! I hope that you will find time to post so that Olga can see what you are up to. ( and WE in blogworld...) Exciting!

Yikes - not really a fan of creepy crawly things, so going to give the video a miss!

This is the coolest thing! I probably can't show Mike (he hates this kind of stuff), but I'm going to see what the program does with some sunflower pictures :)