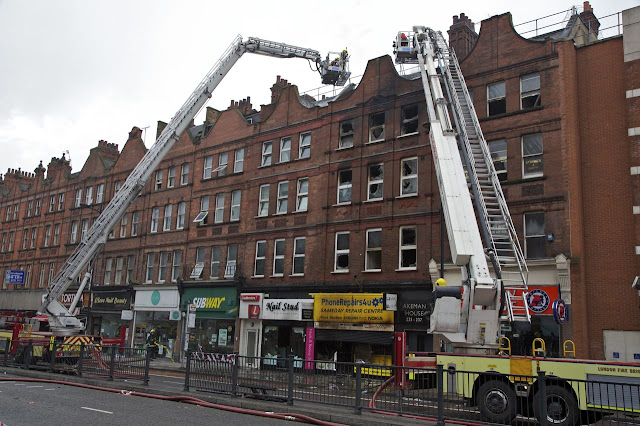 I walked past the scene of the fire yesterday morning on my way to work. From the looks of things, flames and smoke pretty much demolished the interior of at least two buildings. Finchley Road was still entirely closed to traffic, which is no small thing, because it's a major artery through North London.

(By the way, when I said in my last post that this fire was "around the corner" from us, that was an oversimplification. It's probably about half a mile away.) 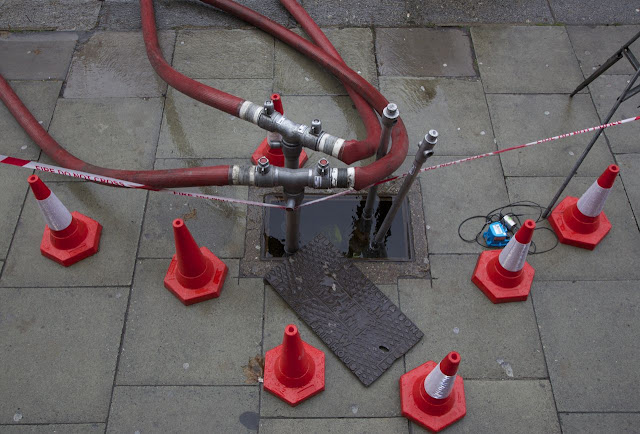 Spectators were gathered on a raised sidewalk across the street, right above one of the connection points for the fire hoses, to watch the firefighters at work. They were still spraying hot spots with water. 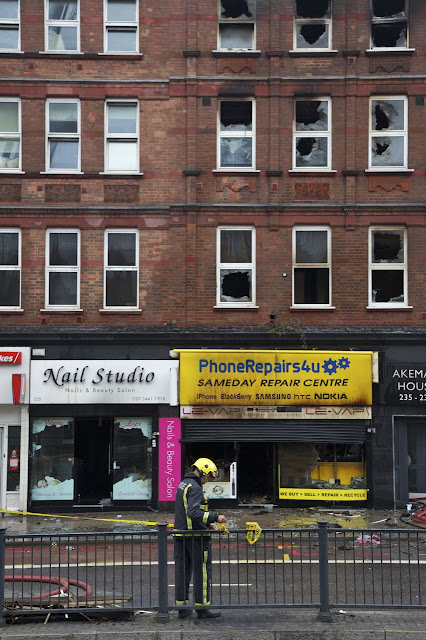 The last I heard, the fire is believed to have started in one of the shops on the ground floor. Fortunately no one was seriously injured. In our neighborhood, at least, traffic seemed to be more or less back to normal last night and the smoky smell had dissipated. This morning it's raining, so that ought to clear the air further.
Posted by Steve Reed at 6:05 AM

I'm sorry for all concerned and glad no one was injured or killed.

Considering that the buildings are so connected all along the street, I'm amazed the damage was able to be confined like that. Kudos to the firefighters. And glad no one was injured or worse.

that is terrifying! Old buildings, no easy way out, looks like, makes me consider taking a rope ladder with me at all times.- and then get hit by a bus, this world is full of peril. Glad you were far enough away.

It's pretty awesome and fearsome when one of the elementals has its way.

Ugh on the fire. This is probably a vulgar question, but are firefighters in London as good-looking as in America? I've always had a thing for them, along with all other women, I guess!