An Exhibit and Book Launch 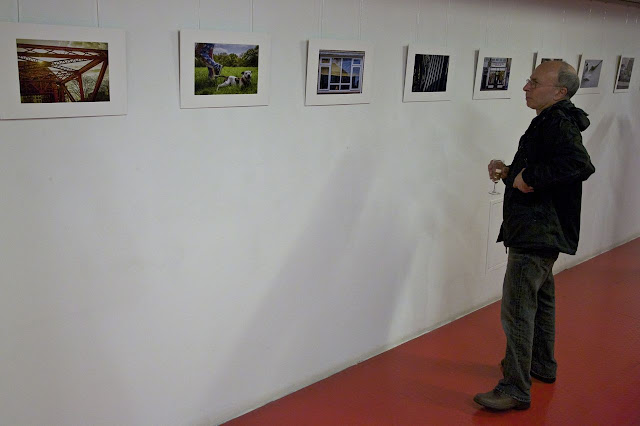 You may remember that I've been working on a photo project documenting unusual barber shops and hair salons. I've been shooting them for more than a year, and recently selected my favorite photos to contribute to the Royal Photographic Society's book "Urbanicity," which has just been published. Woo hoo! We went to the book launch party and exhibit last night.

This is the first time my photography has been in a non-self-published book. So that's something!

The exhibit was small -- just one photo for each of the 13 participating photographers. (My contribution was this one.) If you look carefully at the photos in the picture above, you'll see a shot of Olga, second from left. Yes, even our dog made it into this show! She was there courtesy of our photographer friend Susi, whose pictures of London Dogs also feature in the book. 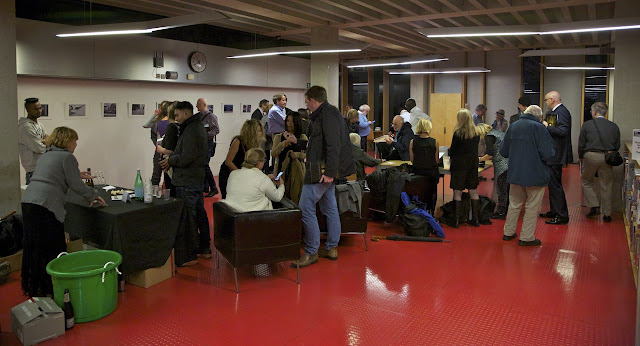 It was a fun evening. Several of my coworkers came, which I really appreciated, and Dave was there too. (You can see him in the photo above, in the blue shirt just to the left of the central pillar.) All of us photographers gathered each other's signatures in our copies of the book, a fun way to create our own memorable special editions. 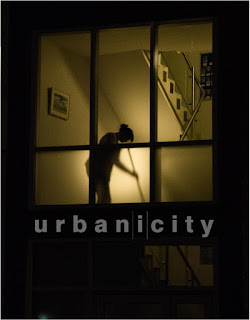 I'm glad everything worked out OK, because police had issued warnings earlier in the day about the potential for violence related to the so-called Million Mask March. This was a big protest related to the anti-capitalist Anonymous and Occupy groups planned for Westminster -- and as you can see from that article, things did get a little crazy there. But our tiny event was nowhere near that protest and we saw no evidence of anything unusual.

Yesterday was also Guy Fawkes Night, or Bonfire Night -- hence the reason for the march, Guy Fawkes being the original anti-establishment activist. I was a bit concerned about Olga being alone in the evening, with fireworks and firecrackers going off around the neighborhood. Fortunately she was fine when we got home. She was in bed as usual.

Anyway, our "Urbanicity" book (left) will supposedly be available in the RPS store for £24.99. I don't see it there yet, but I may have just missed it. Here's some more information about the project, the people involved and last night's event.
Posted by Steve Reed at 7:01 AM