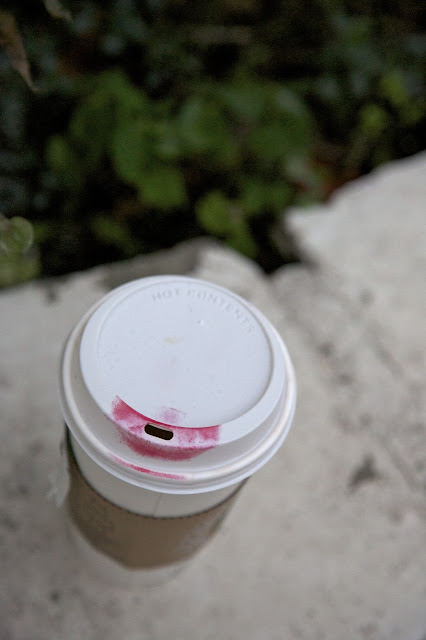 We are in the depths of November, that damp, dark time. The sky is mostly gray, the trees are mostly bare. The soggy leaves piled on the sidewalks have been "trodden black," as Robert Frost put it, and are slick under the heel.

This time of year seems like a slog. I go to work; I come home in the dark. I'm finding that I have very little to say about my days at work, even to Dave. There's a sameness to them all, sitting at the desk, handing out the same computer chargers to the same kids. I need to come up with some library projects to keep me occupied. I have a few lingering in the back of my head.

The past few days I've been making notepads out of leftover printer paper. The kids (and staff too) send massive quantities of stuff to the library printers, and then often forget to pick it up. The one-sided printouts go into a stack, ideally for "second use" as scrap paper on the blank side. Problem is, no one wants to use those loose sheets. So my boss bought some binding glue and we've cut the paper down into halves and quarters, and glued it along one edge to form two sizes of notepad. It's pretty smart, I gotta say, and people seem to like them.

We have a pack of ninth-grade boys who colonize a corner of the library every day during morning break and lunch. It's become their space. They are a big group -- 15 to 20 kids, all sitting and lying on the floor in a jumble of jackets and books and backpacks. I don't mind them too much, but they do occasionally get loud and they kind of take over. I try to chat with them a bit each day so that when they get really crazy and we have to intervene, they'll be more inclined to cooperate. Everything is political, as I wrote yesterday!

One good thing about this November -- Dave and I have not seen a recurrence of our mold problem at home. We've been more careful to keep the heat on, to use the clothes dryer rather than hang clothes to dry indoors, and to contain after-shower humidity in the bathroom by closing the door. The flat is noticeably drier.

(Photo: Knightsbridge, on Sunday. It's a very lipsticky neighborhood.)