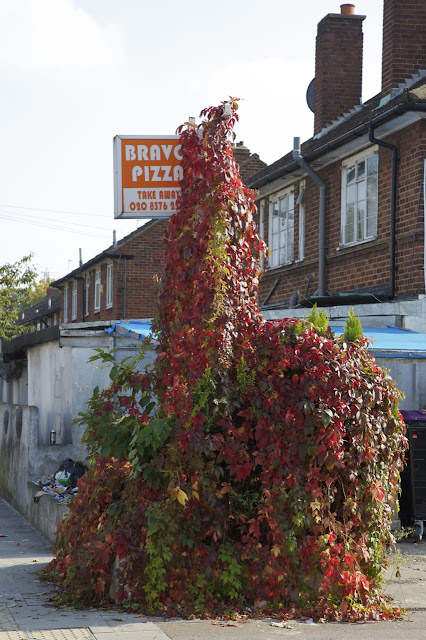 When I sat down to write yesterday morning and saw the news about Paris, I was immediately struck dumb. Nothing I could say seemed adequate.

On a very practical level, I wondered how it would affect my French classes yesterday at the Alliance Française. Our teachers are all from France, and I debated whether to go as usual and what to say when I got there. But when I arrived I found everyone in attendance, and as it turns out, the attacks never came up in class. I guess we all made a concerted effort to go on as usual. Which is the best response to terrorism, really.

The only indication that it was an unusual Saturday was a little cardboard sign propped against the front door, featuring the Eiffel Tower peace sign and the words "Bon courage."

As I get older, I question the social role of religion more and more. Particularly monotheistic religion. I mean, I understand that what happened in Paris isn't based in a healthy religious perspective. I understand that a lot of religious organizations do good things. But still -- this notion that My God is Correct and Yours is Not is so poisonous, no matter whose God is being discussed. Religion creates us-and-them where there should be no such divisions. And it certainly creates culture clashes within Europe, where much of the non-immigrant society is essentially post-religious.

I just can't help thinking we'd all be better off if we could just get past theistic religion, and relate to each other as sentient, reasonable beings in a secular world -- a world of trees and animals and water and earth that we must take care of because there's no one or nothing else. There's room for spirituality in that kind of world, a generalized appreciation for the beauty and mystery of time and life and death and everything we don't understand, but there is no divinely proclaimed right-and-wrong and no guiding hand -- which seems to terrify some people.

Adding to yesterday's gloomy pall, I rented "Apocalypse Now," which I hadn't seen in decades and didn't really remember very well. At first blush it seemed like a poor choice, but in some ways it was actually the perfect choice, with its central questions of morality and deviation from the civilized path. Really good filmmaking, but so disturbing. Dave left the room about halfway through.

So then we finished the evening with "Inside Job," about the banking world and the activities that led to the economic crash of 2008. Not exactly cheerful, but at least a little less visceral.

(Photo: Creeper vine in Tottenham, early October.)
Posted by Steve Reed at 7:20 AM

A world without religion, just truth, nature and people working together. That is probably the only goal worth striving for. The closest we could ever get to heaven on earth.

I hear you. And you know I agree with you.
Amen.

I'm a Christian & I agree with you too. Such a sad world.

You've said what I've been thinking for years, and you've said it so much better than I have ever been able to articulate. I wish more people felt and lived this way. And while I fear that will never be the case - religion seems to have such a hold on many people - still, it's good to know that there are others who believe this way.

I totally agree about religion. it has caused far more damage than good. I've never seen Apocalypse Now and don't ever intend to. I stopped watching war movies long ago.

I agree wholeheartedly. I'm not sure I could stomach either movie, to tell you the truth. Mary Moon suggested Overboard which might be going overboard for me, but this afternoon I'm going to listen to Ursula K. Leguin, and that might be just the ticket. Tomorrow night I have a ticket to go hear Patti Smith read from her new memoir and maybe play some music.