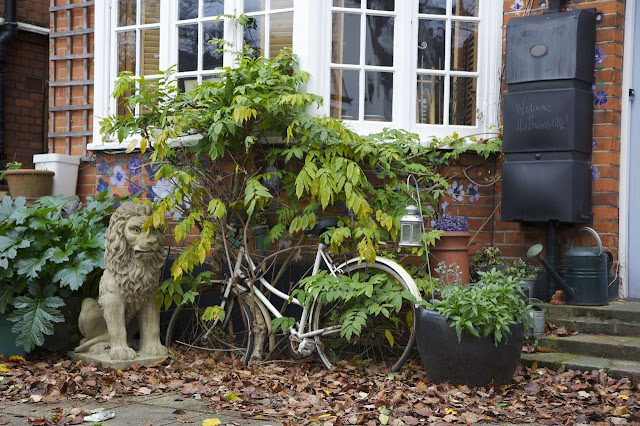 This is a house just down the street. I first photographed it in June, when the wisteria and bear's breeches were so leafy they practically engulfed that lion. (I could have sworn I blogged that photo, but I can't find it now -- so here it is on Flickr.) Now, autumn has thinned the vegetation quite a bit. I dig those purple flowers painted on the wall, which you couldn't even see six months ago.

On Sunday, as a school project, Dave and I made a short video of me speaking Berber. You may remember that I speak a dialect called Tashelhait, which I learned when I lived two years in the south of Morocco. Well, there's a foreign language club at school, and the kids are collecting information about all the languages that other students, faculty and staff members speak. As you can imagine, I am the sole Tashelhait speaker in the building. Those of us who are the only speakers of a given language were asked to make a video so others could hear it.

Now, it's been years since I spoke Tashelhait actively, and I was never truly fluent. But nonetheless I had Dave film me saying some basic things -- greetings, introducing myself and naming some common nouns. (I even introduced Olga in Tashelhait.) It's funny -- the rhythm of the language came back pretty quickly, and even certain words that I hadn't thought of in ages. I guess it's all still in there somewhere!

I'm not going to put the video online, because I'm sure to a native Tashelhait speaker I sound pitifully bad. But it was fun to reawaken that part of my brain, and funny to think that even now, 21 years after I left the Peace Corps, I'm still accomplishing one of its goals -- helping to share the culture of the country where I lived.
Posted by Steve Reed at 6:52 AM

Now some of those kids will definitely remember 'that man from the library' when they are old and grey...

Arrrrrrr. I wanted to see the video

Me too. I am sure it would have just sounded very cool to us! Regardless, it's cool that you did that.

That's an interesting thing to do for the kids...

That's amazing, Steve. it truly is.

How neat that you made that video and as you say, are still sharing the culture.
I love the lion.

I think I mentioned to you that I have a friend who also served in the Peace Corps in Indonesia. he went back to the village where he taught about 25 years later and the tribespeople dressed him up in native gear. somewhere around here I have a picture of him standing there in nothing but basically a penis gourd.

Tashelhait is not in Google Translator therefore it doesn't exist.

That get away bike by the lion looks forlorn. I , too, was waiting for the video. Languages are great for opening mind doors, seeing in different syllables. As you know, I can speak one phrase in French, which catches one off guard- breaks the ice, opens doors ( to mental institutions)language is magic!Amazing how after twenty years your brain still maintains that obscure language. Mine can still spew a bit of Latin I learned when I was fifteen. Useless but entertaining.

How cool - I too would love to see the video!