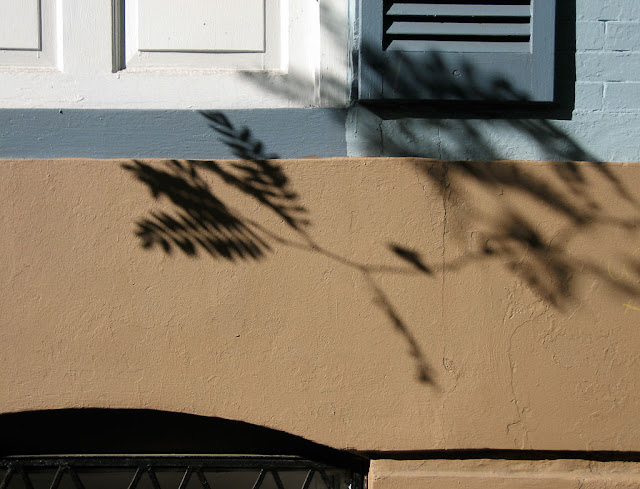 Do you ever think, while reading my blog: "Good grief, this guy has nothing to say."


I wouldn't blame you. I sometimes feel that way myself. And here's what's remarkable -- as of today, I have been saying nothing online for TEN YEARS!

Yes, exactly a decade ago -- as I recall, while I was sitting at my desk at The New York Times -- I launched Shadows & Light. 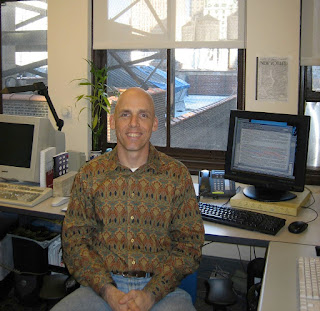 Let's take a trip down memory lane: That's me, at left, when and where it all began, with my view over the theaters and rooftop water tanks near Times Square. (I used to love that shirt. I bought it at Macy's. It eventually faded and went to Goodwill, but I still miss it. And look at my prehistoric computer! Good Lord.)

I began blogging almost on a whim. I'd been curious about it for a while, having kept a journal for years and years -- I was already in the habit of writing about my life. And then I bought a simple point & shoot digital camera, my first, and began taking pictures on the streets of New York. I thought, "Wouldn't it be great to put these images online?"

I wasn't on Flickr at the time, and a friend had recently launched his own blog on Blogspot, so I chose that as my platform and took the plunge. I named the blog Shadows & Light partly as a tribute to Joni Mitchell, one of my favorite singers -- ironically, her "Shadows and Light" album is one of the few I don't have -- and partly because, well, that's what it was going to be: Pictures of shadows. Pretty basic!

And it was pretty basic, especially at the beginning. Basic to a fault, in fact. I was actively practicing Zen at the time, and I was very focused on simplicity. I really wanted most of my posts to be just a picture and a few lines of text. I remember my friend Kevin suggesting I write more, and I resisted the idea. (I was also nervous about putting information about myself online.)

I wasn't sure what to expect. I suppose, like many bloggers, I thought I might eventually have hordes of people following my posts. Hundreds! Thousands! Tens of thousands!

I quickly learned that most people are way too busy and absorbed in their own lives -- and rightfully so -- to pay any attention to mine. I wrestled with disappointment, but also realized I was giving my readers very little. So gradually I opened up more -- there's freedom in obscurity -- and found some reliable readers and a community of fellow bloggers.

Now I think of us like a little creative-writing club. You read what I write, I read what you write. We exchange feedback. I eventually abandoned any attempt to become a widely read blogger -- after all, I'd been writing for years in paper journals with no audience at all. Why did I need one now?

These days, I get something like 500 page views a day. Not that many, especially since some of them are mine! But I'm fine with that. I could be Tweeting and boosting my blog on Facebook -- the vast majority of my Facebook friends have no idea this blog exists -- but I appreciate being a bit under the radar. 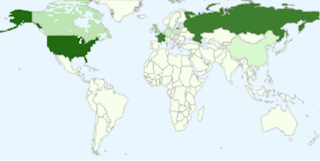 According to my Google stats, they like me in Russia. I'm not sure why that is, but I have a sinking suspicion that it isn't good. And they like me in France, strangely, but the English appear largely indifferent. ("Another bloody Yank!")

My most popular posts? This one, a short, grumpy post about those silly family stickers that people put on the back windows of their cars, tops the list. In fact, a lot of people find my blog by searching "family stickers" on Google. Which is bizarre.

For a long time, my most popular post was tangentially about the actress Tina Louise. After it went up, I made a short-lived vow to mention Tina Louise in every post, because she brought me so much traffic.

As you can see, my page views have grown steadily -- from nothing to next-to-nothing.

But I must add a caveat to this overlong blogaversary celebration, by admitting that although I've hit the ten-year mark, with 3,035 overall posts, 17,337 comments (merci!) and nearly half a million all-time page views, I haven't really been writing a full ten years. That's because I took two substantial breaks: for just over two months between November 2008 and February 2009, and for seven months between October 2010 and May 2011. During that latter break I was writing and reporting full time and I just didn't have it in me to sit typing off the clock.

Now, I can't imagine not blogging. It has become such an important part of my day -- when something happens to me I often think, "This will be great for the blog!" And the community I've developed and the friends I've made have changed my life. I've been to a blogger May Day party, complete with a maypole. I've visited other bloggers on their own turf, experiencing a blissful kind of blog-meld. Other bloggers have visited me. I met up with a blog pal in Paris!

So thank you, bloggers and readers, for this awesome experience. I promise I will never write another post this long.

(Photo: Revisiting one of my favorite photos from my New York days, originally posted ten years ago tomorrow.)
Posted by Steve Reed at 5:32 AM