A Tree Mallow, and Trump 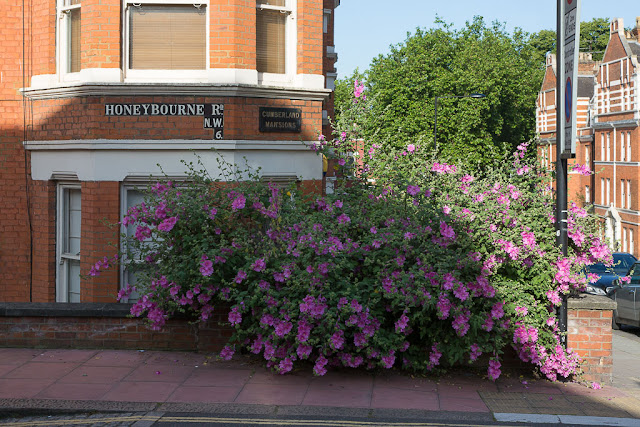 This amazing bush, a tree mallow, is located around the corner from our flat. It's less amazing now, though. I took these pictures in late June, when it was spilling over the garden wall in floral abundance. 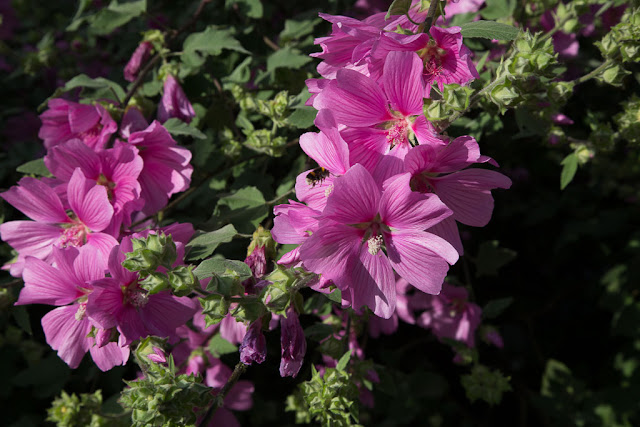 Since then, someone decided the mallow had to be pruned back to the wall, and most of the front of the bush was chopped off. Argh! Was it an inept gardener or maybe someone from the council, trying to clear the sidewalk? Who knows.

I'm going to remember it as it was.

There's an article in the July 11 & 18 issue of The New Yorker about fans of Donald Trump, and I found it fascinating. I know very few people who are likely Trump voters, and I'm always curious to know what's going on in their heads. I genuinely cannot conceive of a reason that anyone would support Trump. The article explores that, as well as the political conditions that gave rise to Trump in the first place.

There are lots of terrific snippets in the piece, by George Saunders, but I especially liked this one, given my background in newspaper journalism:


"Where is all this anger coming from? It's viral, and Trump is Typhoid Mary. Intellectually and emotionally weakened by years of steadily degraded public discourse, we are now two separate countries, LeftLand and RightLand, speaking different languages, the lines between us down. Not only do our two subcountries reason differently; they draw upon non-intersecting data sets and access entirely different mythological systems...In the old days, a liberal and a conservative (a "dove" and a "hawk," say) got their data from one of three nightly news programs, a local paper, and a handful of national magazines, and were thus starting with the same basic facts (even if those facts were questionable, limited or erroneous). Now each of us constructs a custom informational universe, wittingly (we choose to go to the sources that uphold our existing beliefs and thus flatter us) or unwittingly (our app algorithms do the driving for us). The data we get this way, pre-imprinted with spin and mythos, are intensely one-dimensional."

In RightLand, he points out, Vince Foster really was murdered, children are brainwashed by left-leaning universities and Obama really is a Muslim (and maybe not even an American!). To me, those are all laughable assertions, repeatedly disproven. In RightLand, they're facts.

How does a Democracy function when so many people willingly believe outright falsehood?
Posted by Steve Reed at 6:40 AM