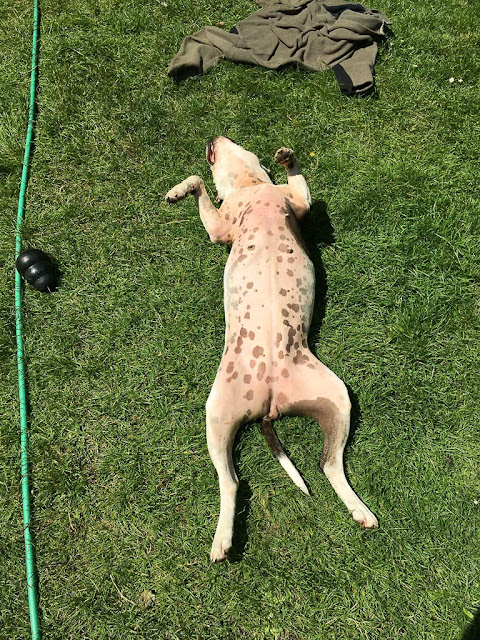 I made it back across the pond. I'm a bit bleary-eyed, but I had a good flight. I watched "Meet Me in St. Louis," with Judy Garland, which I rented from iTunes and which basically advertised to the entire plane that I am a big ol' gay. I may as well have painted a rainbow flag on my forehead.

I sat next to an older couple who were a bit too chatty for my taste, but when I wasn't watching Judy I buried my nose in Jane Mayer's terrifying book "Dark Money," about the influence of the Koch brothers and their ilk on American politics. Thus I wasn't drawn into too much conversation.

When I walked in the door, Olga leaped into the air -- literally, all four feet off the ground. Dogs always make us feel so loved, don't they? (I guess Dave was glad to see me too.) Dave had a garden surprise in store -- he cleared out a big patch of English ivy and planted the area with some new flowers, as well as lots of new plants in other areas. He said he moved or planted 47 plants during my absence. How he keeps track, I have no idea.

Today's photo is courtesy of Dave, who sent it to me just after I posted yesterday. That's pretty much Olga's pose today, too!
Posted by Steve Reed at 11:23 AM

Welcome back home! Just get out a magic marker and connect the freckles on that belly! :)

"I may have well as painted a rainbow flag on my forehead."
Haha! Well, I'm glad you're home with your dog and your man and the garden which Dave is obviously turning into a paradise.
All is well in the world now. You are home.

Is a "big of a gay" something like a "bit of a gay"? I like Olga's pose for the camera - more females should imitate it in my view.

glad you made it home safely and as Ms Moon says to your garden, your dog, and your man.

Glad you had a good flight and are now back at home! I'm sure Dave and Olga are happy too!

I love my family but my blood pressure goes back to normal when I get home. Having a puppy welcome home always makes it even better

I find it amazing how you travel between the continents with such apparent lack of worrying. I would be a wreck.

I thought yesterday's photo of Olga was a study in relaxation - until I saw today's! That girl always makes me smile.

Oh that dog...she cheers me up so much! I'm glad you had a good trip. Best to Dave.

Each flight is different. People beside you certainly make a difference. My wife has to talk. The last time coming from Chicago my wife talked to a young guy for the whole trip.

So glad you have read DARK MONEY! I wish everyone would. Trumps running mate as you know by now is the Koch brother's bitch, and so it begins, Their plan, their shining hour...Glad you are back in UK, even though the new PM is a derp. I have upgraded to premier as I did lat flight which is even longer than yours, makes a difference, window , bulkhead, only one person next to me. Good price on flight but staying in LONDON is outrageous, doing it anyway...life is short. Nice to see freckle girl being so chill!