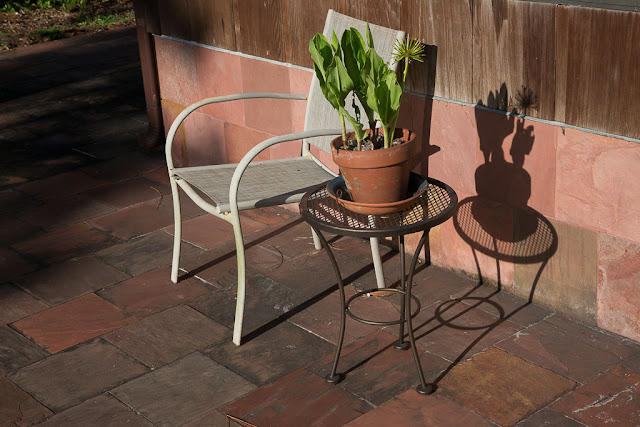 Suddenly there is so much to do.

Obviously, there's a funeral director to deal with -- even if, as in our case, there is no funeral -- and there are clothes and possessions to sort. But there are also credit cards to cancel, insurance policies to claim, pension plans and 401Ks and property titles and blah blah blah. All the little essentials and conveniences of modern life that must be wrapped up neatly.

We met with the funeral director yesterday, and I must say, the guy was great. He was very direct and didn't try to upsell us on anything. My father wants a simple cremation with no service whatsoever. My stepmother did decide to buy an urn, but the funeral director didn't even urge that upon us -- it was her decision. Cremation is a process that takes a while, so I may be back in London by the time his ashes become available. We don't have a firm plan for what we're going to do with them.

Funny aside: During our meeting, the funeral director's cell phone rang several times. His somewhat startlingly loud ringtone was the theme from "The Godfather." Which, coincidentally, was one of my dad's favorite movies. We all laughed.

We decided to go ahead and place an obituary in the newspaper. We debated whether Dad would even want that -- but he always read the obituaries, and I think it's only fair to give his former coworkers and students an opportunity to know. I've got to get that done today. 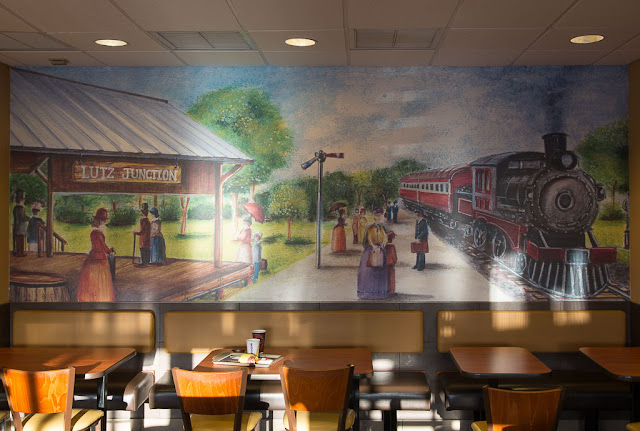 My brother and I went to breakfast at McDonald's yesterday, where we sat beneath this depiction of Lutz, our suburban community, back in its early years. My brother thinks the people look suspiciously prosperous -- probably nothing at all like the residents of hardscrabble turn-of-the-century Lutz. But you gotta give McD's some credit for trying to create a sense of place in what would otherwise be generic plasticland. 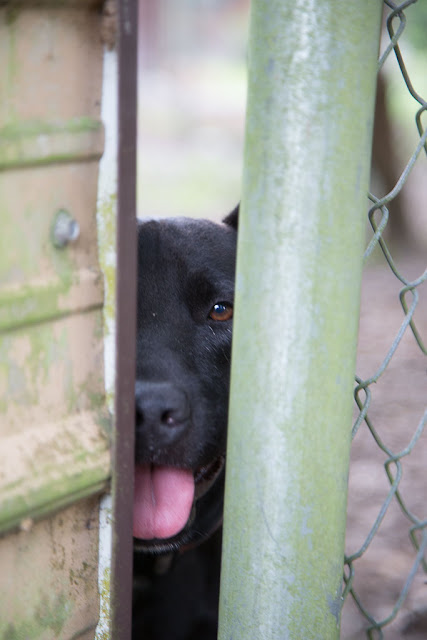 I spent some time with Maybelline yesterday in her dog yard. She's a crazy girl. She loves to lie in my lap, even though she's about 40 pounds and always full of sand. Like all dogs, she is in the moment. If she feels any absence, it doesn't show.

My brother and I went through my dad's garage, and my brother collected some spare Volkswagen parts to take back to Jacksonville. He carries on Dad's interest in Volkswagens, and it's good to know all that stuff won't be wasted. The garage is an interesting embodiment of my dad's mind -- everything categorized and neatly stashed in zillions of tiny jars and boxes and drawers and cabinets. Way too much complexity for me. It's all too organized to be called hoarding, but we did marvel at some of what Dad saved. We have a lifetime's supply of desiccated rubber fittings and damp, ancient matchbooks!
Posted by Steve Reed at 10:34 AM

I hope you find at least a couple of personal things that belonged to your dad and bring them back to London to be treasured touchstones... an ornament, a picture, a flake of his life.

It's good you have your brother to go through the tasks with you. You and your family are in my thoughts.

Oh god. I do not want to leave a huge number of possessions for my kids and/or husband to deal with. We humans are all hoarders on one level or another. It's all relative, I think.
After a death there is so much to deal with, no matter what.
As Angella said- at least you have your brother. And other family members too, I'm sure.
I hope everyone is supportive of each other. Sending love your way.

The going through and sorting is the most difficult...I'm glad you have help and not just a bunch of crazies like I did...Best to everyone !

You guys have a monumental task ahead of you to take care of all the business matters and then deal with the household contents. My daughter says, "I'll have fun with all your stuff sending it to the dump!" I know she won't do that. It's her wacky sense of humor. Anyway I hope things go well.

I remember going through all that when my mother died. My father had died about 8 years previous. same simple cremation, no service. going through her stuff. she kept every gift tag off every present she had ever received.

The ending of the most organized life has loose ends and things to sort. I always think of the possessions as something to deal with, but there's also, as you say, so much in the way of financial paperwork to sort. Good to have family to help.

Long time reader, first time commenter. My deepest condolences to you and your family. Your description of your father life honored him greatly.
Xoxo
Barbara

My thoughts are with you and your family, Steve.

Oh my goodness, your description of your dad's garage is almost exactly the same description my friend David described to me just Friday night at dinner. He was talking about cleaning things out of his dad's garage because his mother wants it cleared. His dad passed away a year ago so I guess it's time.

I really dread doing this with my dad's house - he's lived there for nearly 50 years, and most of my mother's stuff is still there too. It seems really overwhelming. Shoot - my OWN house is overwhelming & we've only been here 7 years!

I meant to mention on your last post - we had a green VW Bus that looked a lot like the one in the picture with your dad. I learned to drive on that behemoth. I still miss it - but not its pitiful engine. Could barely get up a hill in that thing :)

We did an obituary for my father also, despite having no visitation or service. Like you said, I felt it was important to those outside the immediate family/friends circle to have a way to know of his passing. I also thought it would make an easier genealogical trail for future generations if his obituary was in a publicly published newspaper instead of only a government archive. It also allowed us to let people know where they could, if they wished, make a donation in my dad's name. And with no other formal means of closure, the obituary helps to serve that purpose too.

There IS such a lot to do afterwards, even without visitation and a funeral. It's good to be around family and others who understand and share in your loss. It helps in processing it as well as dealing with the legalities and possessions. You may find that the finality of your dad's death will not fully sink in for awhile; I'm speaking from my own experience which is the only one I have. Yours may be quite different. Whatever it is, be kind to yourself.

I have been were you are.....
And you work on automatic and adrenalin
Sending you mine and the Prof's best wishes
Take care my friend x

My sincere condolences Steve, at this difficult time.

Thank you for sharing with us a small part of your father's life. The final photograph will be something to treasure always.