Dad, and a Giant Small Dog 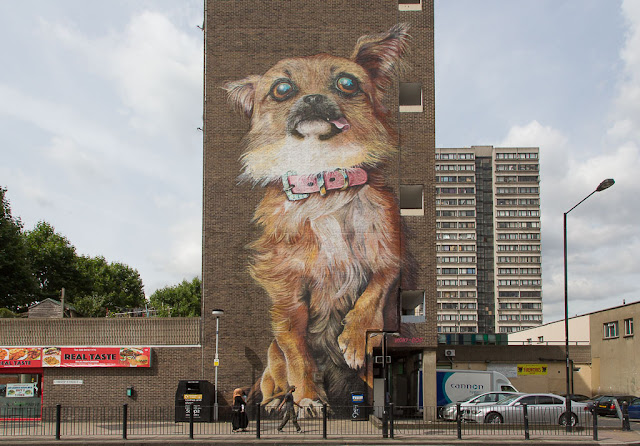 My dad is in the hospital again, this time with what appears to be pneumonia. I've been in regular contact with my family but, having just returned from Florida, I don't plan to fly back unless his condition worsens. He's in the ICU, and he's mostly sedated, so we're doubtful he'd be aware of my presence even if I were there. We're in a holding pattern, watching and waiting to see how he fares.

In honor of him and my stepmother, and their chihuahuas Pinky and Manny, I went to East London yesterday to photograph what is possibly the world's largest small dog. I just became aware of this piece of street art, by Boe and Irony, but I think it's been up for a while. It's in Google Street View pictures taken last fall. Pretty amazing, isn't it?

Anyway, I'm now in an awkward position -- Dave and I have numerous minor events planned this week and, more importantly, our pre-paid trip to Copenhagen this weekend. We're certainly ready to drop all that if need be, and even to absorb the financial losses, but my hope is my dad will recover enough that it won't be necessary. It's not so much that I want to have fun in Copenhagen -- in fact it's hard to imagine having any fun with this going on -- but if we don't go, we'll lose the more than £1,000 we've paid for airfare and three nights in a hotel. Argh!

I know. I feel like a selfish bastard even raising the issue. But it's out there.

We just have to take things day by day and see what happens. There's no reason to expect that he won't get better, although it's certainly possible that he won't. Only time will tell.
Posted by Steve Reed at 7:32 AM

I hope your dad will recover in time for you to enjoy your trip. I would check out flights from Copenhagen to Florida just to be prepared. Also unlike airlines hotels can be quite understanding when presented with real sad dacts. But from experience I suggest a cancellation insurance when you book your next trip. Esp. with elderly relatives. Maybe you can still get one now.They are cheap online. I realise I come across like an insurance broker but believe me we learned this the hard way.

Actually, I did buy travel insurance through BA, but I am loathe to get into a position where I need to make a claim because I'm sure it would be a hideous process. But we can do it if need be. I'm not sure how much would be covered, ultimately.

I understand your dilemma. If you do need to fly back to your father's bedide, I will be willing to take your Copenhagen tickets off you and you won't need to pay me a penny.

Don't get all riddled with guilt over this convergence of events.Things happen and it's natural to want your plans to go through.
The weekend is close and your father's in good hands. Hopefully, it will all work out.

I hate it when things like this happen. Oh, Steve! I think Sabine had good advice- research flights from Copenhagen to Florida.
And hopefully, your dad will recover quickly. That is my wish for you.

sorry to hear about your dad.

I hope that your Dad makes a swift recovery. It's very difficult when you are far away from people who are not doing well.

I'm so sorry to hear about your dad. That would worry me too. I'll be sending some positive vibes over to Florida today.
That mural is wonderful. I'm sure that's how one of those tiny dogs sees itself.
Re. your comment, Tarbell's Tavern is named for the chef-owner, Mark Tarbell. He has a fine dining restaurant next door to this one that is also a favorite of mine (when I'm feeling a a need to splurge) that is called simply Tarbell's. His food is always very creative and delicious.

I've never had money on the line but work deadlines often seemed to coincide with my dad being hospitalized. I'm quite sure there was no connection but it was hard anyway. I hope your dad recovers quickly and you manage to get your trip in.

So sorry to hear about your dad. I've been in this situation before & it's always hard to figure out what to do. I usually decided to act as if all would be well because planning for something that might happen is crazy-making. Not that making that decision ever kept me from worrying...

Praying you dad stabilizes and gets better soon. Sending love from Jamaica.

Thanks for the good wishes, everybody. My approach is similar to Bug's above. I think we have to just move forward as if all will be well, until it's not. Then we'll change course.