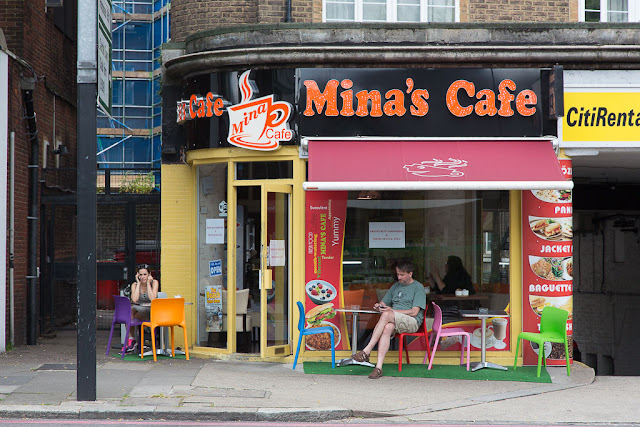 More nocturnal garden shenanigans! Remember our poor, beleaguered venus flytrap plant? It's been hanging on, sitting in our garden in its plastic pot, shaded by some larger plants. Well, yesterday morning we awoke to find it dragged across the yard and pulled from its pot. I'm thinking it would require an incredibly athletic squirrel to do that, so once again, I suspect the fox -- although why the fox was interested in the venus flytrap I have no idea. We put the plant back in the pot. It may survive.

Our hanging basket on the patio was also excavated and dirt flung everywhere. That had to have been the work of a squirrel.

Speaking of which, for weeks now, Dave and I have been marveling at how quickly the peanuts in one of the bird feeders have been disappearing. We see tits eating them all the time, but tits are tiny little birds, and we were impressed they could consume so much.

Then, the evening before last, as darkness was falling, we saw the true culprit: 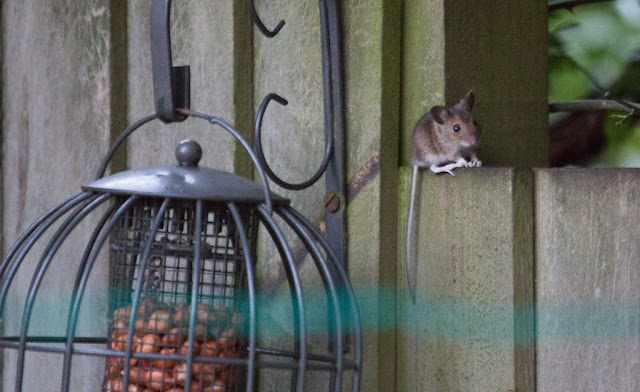 Aha! That explains everything. We've since seen at least three of these little mice eating the nuts. (The photo is a bit blurry because it was so dark and I had to manually focus.)

Dave and I went to see the new "Star Trek Beyond" movie yesterday afternoon. We stopped in to a cafe in Swiss Cottage before the film -- that's Dave in the top photo, sitting out front -- and then caught a 3-D IMAX show. We both loved it. I wouldn't say it's very cerebral but it sure was fun, and the effects are amazing! 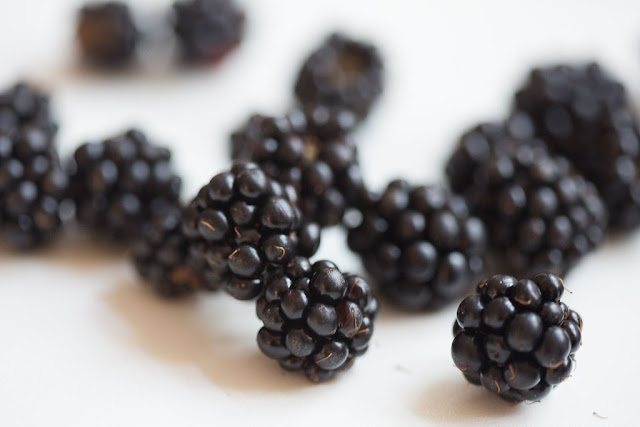 And finally, it's blackberry season again! These are the first berries harvested from our backyard vines. I cut them back quite severely in February and thought we might have fewer berries this year, but as it turns out, the blackberries always win. We have just as many as before.
Posted by Steve Reed at 8:20 AM

Two hundred miles north, the brambles (i.e. blackberries) are by no means ready for picking. Two or three weeks yet. I am proud to say I have never seen a "Star Wars" film and have no plans to ever watch one...but hey, each to their own.

I think Venus flytrap a may emit a smell of rotted meat to attract flies. Could that attract a fox as well?

Your blackberries look delicious.
That mousie looks very twee but I hope he stays in your garden with the peanuts rather than in your house.

Something keeps knocking over our garden gnome & disrupting the sunflowers. I suspect squirrel shenanigans - we have two young ones that like to tear through the yard chasing each other. Hilarious!

Sounds like Ellie Mae Clampett's back yard! Wonderful shot of that little mouse! I LOVE it. Glad you got to go see a big time movie, I went to see AB FAB yesterday, parking, movie ticket and soda= thirteen bucks all together, not bad but the movie was...so bad, darling sweetie- they have lost their mojo. Blackberries NEVER die, blackberries are relentless!

You captured the cuteness of the mouse very well! Although I agree with Cheryl, I hope he and his friends don't come in your house. Not likely to be an issue until the colder weather, though.

It's good to watch non-cerebral stuff part of the time! I never got into Star Trek but I enjoyed the original Star Wars movie a LOT.

My Canadian friend taught me to love blackberries and yours look delicious!

It looks like the critters are going to overtake your back yard. All three that you mention are nuisances but I guess we have to put up with them. I draw the line at mice.

your critters may be annoying but at least they aren't planting pecan trees in places it's impossible to root them out of.

Ms Moon: Do they?! That would certainly explain it!

Cheryl: I agree. In fact, I told Dave we should probably move that feeder to minimize mouse access so we don't encourage more of them.

Linda Sue: I thought it was a fun movie, but it lacks the depth of character that the TV show achieved, particularly in its first seasons. It was just two hours of silliness.

Jenny-O: See, I've always been more TREK than WARS. I guess it just depends on what you watched as a child!

E: You didn't learn to love them in Florida?! They're all over the place. We used to pick them in our back yard when I was a kid.

Red: Yeah, the critters are definitely asserting themselves. I don't mind mice as long as they stay outside.

Ellen: That's true! Although we do have a walnut tree and occasionally a walnut sprouts where we don't want it...

Your yard is turning into quite the zoo with all kinds of wild critters holding court.