A Sunny Day, and Hockney 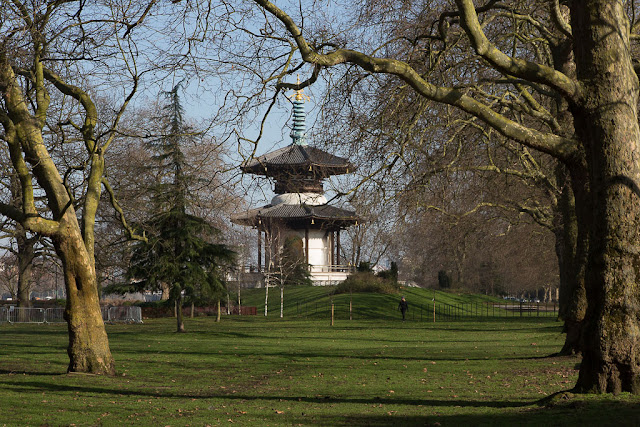 We had beautiful, clear skies yesterday! Pretty much unheard of for this time of year, and if the weather reports are to be believed it's pretty much the only sunshine we'll see through the middle of next week. And yet, there was not a cloud to be seen. Are the weather gods toying with us, or what?

I seized the opportunity to take a photo walk through Chelsea and Battersea. I took the 328 bus down to the Chelsea neighborhood known as World's End, which is exactly what it felt like after 45 minutes on a city bus. London bus drivers must be the most Zen people on Earth. They seem utterly unfazed by cars cutting in front of them, pedestrians stepping out into the street, construction zones. They politely wave drivers to turn in front of them and proceed in slow dignity along their routes. (Sometimes very slow dignity.) If I were a bus driver I would be consumed with rage.

When I finally got to World's End, I explored the neighborhood around the old Lots Road power plant, now under redevelopment, and then crossed the Albert Bridge to Battersea. I visited the Peace Pagoda in Battersea Park (above), which I'd only seen from a distance before. It has brilliant gold sculptures of scenes from the Buddha's life on its four sides. 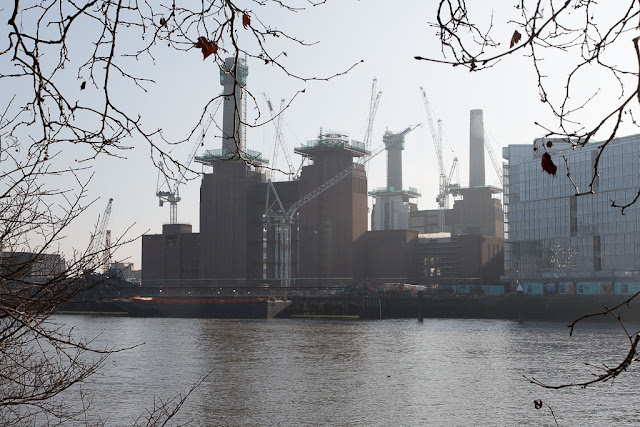 I crossed back over the Chelsea Bridge and got a good view of the old Battersea Power Station, which has changed dramatically since I visited more than five (!) years ago. It's also being redeveloped, including rebuilding the smokestacks and apparently some of the walls. Eventually, it will be surrounded by (and contain, I believe) apartments, like the ones at right in the photo above.

I remember John Pawson, in his book "Minimum," about his minimalist architectural aesthetic, citing the Battersea Power Station as an icon. I bet he hates the thought of these apartments cluttering up the view. 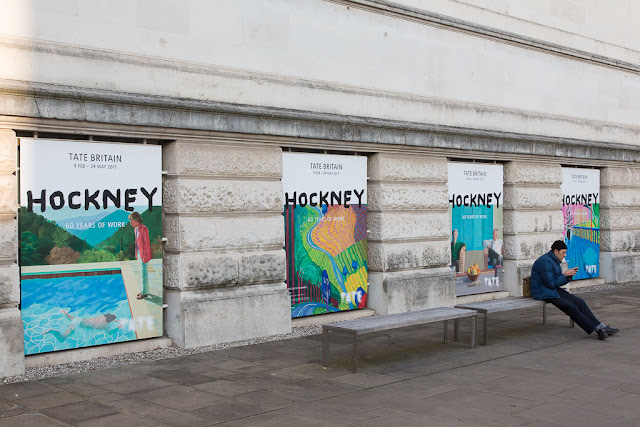 My goal for the day was to attend the David Hockey exhibit at the Tate Britain. I'd bought an entry ticket the day before, anticipating crowds, and sure enough it seemed well attended. I was introduced to Hockney's paintings as a kid because they were used in the opening credits of Neil Simon's movie "California Suite," and I've loved them ever since. I used to have a poster of "A Bigger Splash" when I lived in Florida.

I'll say this for Hockney -- he's a master at painting the shimmery, rippling quality of light in a swimming pool. I was also unaware of his earliest work -- which was remarkably gay, at least for its time period in the early 1960s. More recently he's done photo and video collages involving multiple shots of the same scene, taken at different moments or slightly different angles, and giving an overall impression of depth and movement. Hockney likens traditional photography to the view of a Cyclops -- the single lens and flat plane. I'm not sure I entirely agree with that, but the collages were interesting and effective. 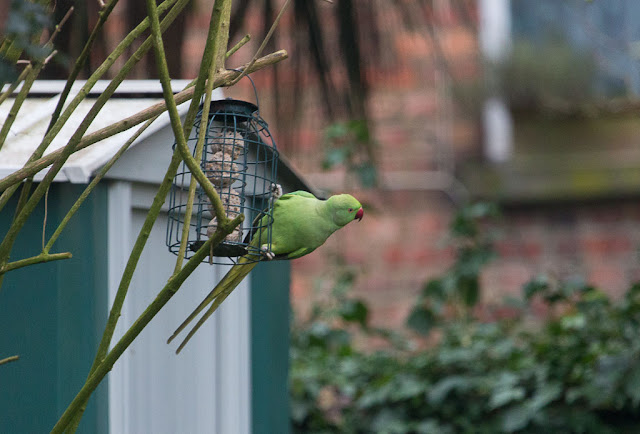 As if in keeping with the bright subtropical theme of Hockney, we saw a parrot on one of our bird feeders! They've come around before, but I hadn't seen one in our garden in a while, so it was an unusual treat -- like the suet balls undoubtedly were for the parrot.

Last night we had dinner with our friend Tim, visiting from the states, and his friend Mark, who lives in Bournemouth. We went down to Kensington (on the 328 bus, again!) and had a good time, although I burned the roof of my mouth on my overly-hot cottage pie. I hate that.
Posted by Steve Reed at 7:15 AM

Great post, and that weather is divine. Happy Hearts Day to you and Dave!

If you hate cottage pie why the hell did you order it? As for David Hockney I would love to see that exhibition and may do so in the near future. Another great Yorkshireman.

I don't know Hockney's early work either. I'll have to look it up.

This whole post left me feeling pretty ignorant. I'm not familiar with Hackney except in the vaguest swimming pool sense and I don't even know what cottage pie is.
I do know pretty weather when I see it and you certainly had some. And that parrot is fabulous!

I wouldn't even recognize the Battersea Power station with all that construction going on. It will be interesting to see how it gets shaped into apartments. That exhibit sounds fascinating and given that I loved my most recent visit to the Tate Britain, I'd use any excuse to go back. I love seeing that parrot at the feeder.

I'm impressed with the redevelopment. Lots of cranes working there. Somebody once said to me , "Take a walk and you'll get lots of photos".

And here I thought this post was going to be about some kind of hockey/something else hybrid sport :)

Nice shot of the parrot. I'm sure he/she appreciated the treat.

Ah, London. Sunshine, green grass, a Hockney exhibit and a parrot at the bird feeder. Methinks you live in paradise, Steve (with the possible exception of slow buses and overly hot cottage pies.)

Thanks for the information on the cleaner, Steve - much appreciated.

There's a Hockney exhibition on at the moment out here too. As for burning the roof of your mouth with food, it's the worst thing to happen if it is the first mouthful of food for the meal.