Tulips and Another Day of Sun 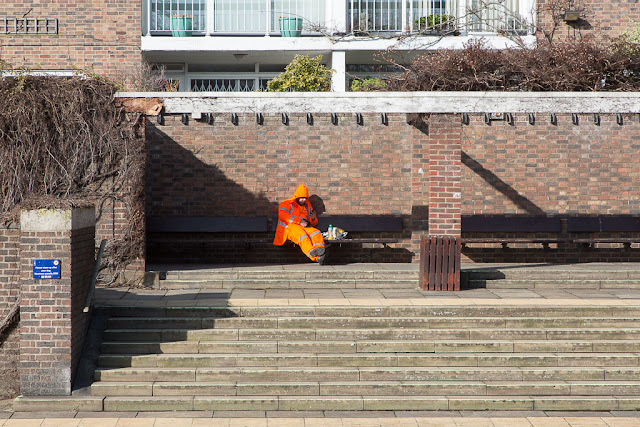 Yesterday was much nicer than I expected, weather-wise. The sun decided to hang around and grace us with its presence for at least another day. Overall, the seasons seem to be turning -- it's a bit brighter out, more spring-like, and we neatened up the garden a bit.

And it was Valentine's Day, which wasn't really on our radar. We made no special plans, but Dave came back from getting his hair cut with a bouquet of red tulips, which was cute. I sort of had it in my head that our trip to Broadstairs today would be Valentine's celebration enough, but I did tell Dave how much I love him and how glad I am that we found each other. I gave him a verbal bouquet.

This feeling was especially acute because I worked more yesterday on transcribing my journals, and reading about all my struggles to meet people and go on dates -- especially when I was living in Southwest Florida more than 20 years ago -- made me appreciate what I have now all the more. It's actually somewhat exhausting to re-read parts of these journals, the moments of youthful drama and loneliness. I don't transcribe those pages! Seriously, editing can be a challenge -- to represent the mood of the entry and my state of mind, yet eliminate the superfluous (and embarrassing) self-indulgence.

Overall, though, it's a very fun project and I hope it's creating a useful and accessible record.

In the afternoon Dave and I went to see "20th Century Women," which I enjoyed. It was another slow-paced talker of a film, about a single woman raising a teenaged son in Santa Barbara in the late 1970s -- a time period with which I can identify! The film is well-acted by Annette Bening and others, and visually beautiful. I loved the cinematography, the shots of turbulent blue ocean and brilliant magenta bougainvillea and golden West Coast sunshine. I'm thinking Dave and I need to go to California sometime.

We considered going out for a martini afterwards but navigating the crowds around Piccadilly Circus made us decide to come home instead. A gin & tonic on the couch is hard to beat!

(Photo: A workman's lunch break, Monday in Chelsea.)
Posted by Steve Reed at 5:44 AM

Your post prompted me to look for a quote from Epicurus, which I recently read - "Do not spoil what you have by desiring what you have not; remember that what you now have was once among the things you only hoped for."

Ah, Santa Barbara. I will look out for this film if only for the cinematography.

Have a lovely time in Broadstairs even though it's not Malibu.

I love that quote, and by all means, visit California. You'll like it. Broadstairs sounds interesting...Enjoy.

Sweetness. Have a lovely trip!

Enjoy your trip. I hope there is some sunshine.

Transcribe those difficult pages as are. They certainly bring back the bad old days, but these experience have to be on record for you and others. People have to know the struggles people like you live with.

Enjoy your trip. It is so nice that the weather has been sunny and pleasant for your week off from school.

Love and tulips - and g&t on the couch. Made me smile. Many more Vdays for you two!

A verbal bouquet is a lovely thing.

Nice tapas restaurant in tbe middle of broadstairs
You may remember its the Prof's hometown...hes there tonight

As I have aged, I have found that a drink (or two, or three) at home is usually more relaxed than a drink in a bar.

I think you and Dave would love the Bay Area and you'd enjoy the Mission murals. San Fran would love you and you it.