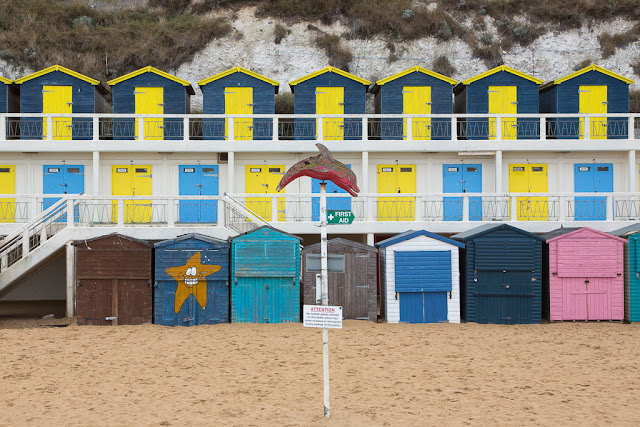 Yesterday was our day to explore the town of Broadstairs itself. After a light breakfast at our hotel, and a romp with the Kong on the windy, chilly beach, we all took a taxi into town. (Dave was very emphatic about not walking.)

We got dropped off at the bottom of the high street, where the town meets the water at Viking Bay. There's a wide arc of beach guarded by a line of colorful bathing cabanas -- one sign referred to them as "chalets," which sounds oddly alpine. 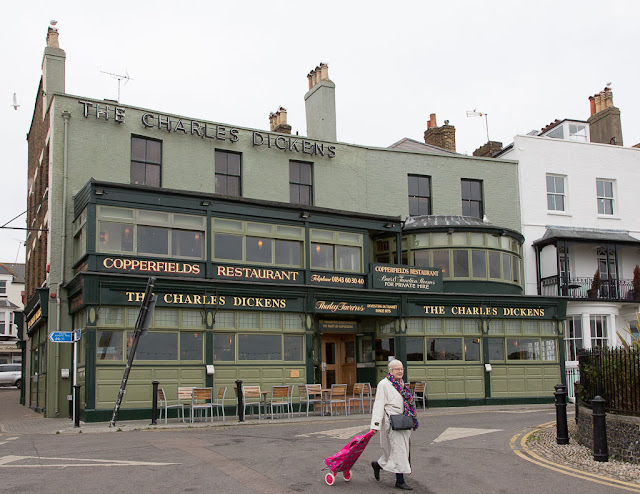 We promptly found a pub named after Charles Dickens, who summered in Broadstairs and wrote "David Copperfield" there. In fact the big house on a cliff overlooking the bay where Dickens lived is now known as Bleak House, though apparently the namesake novel is actually set in Hertfordshire. 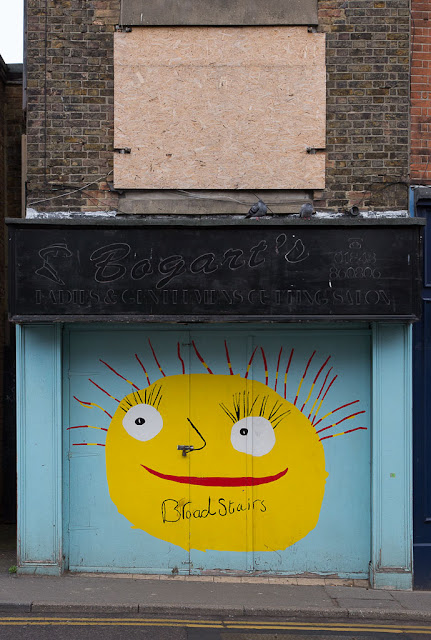 It was a bit too early to eat again, so we walked through town to the train station, passing some intriguing artwork along the way (the result of a local contest among children to decorate some vacant shopfronts). 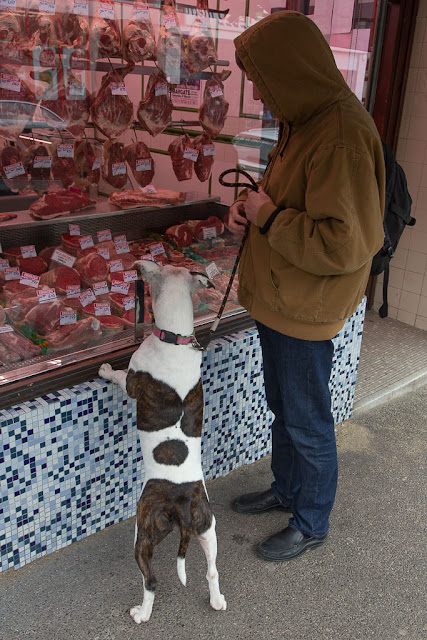 Olga found her favorite shop. It was all we could do to keep her out of there. I hope the proprietors appreciate our dedication, because otherwise she would have been doing full-body rolls in the meat case. 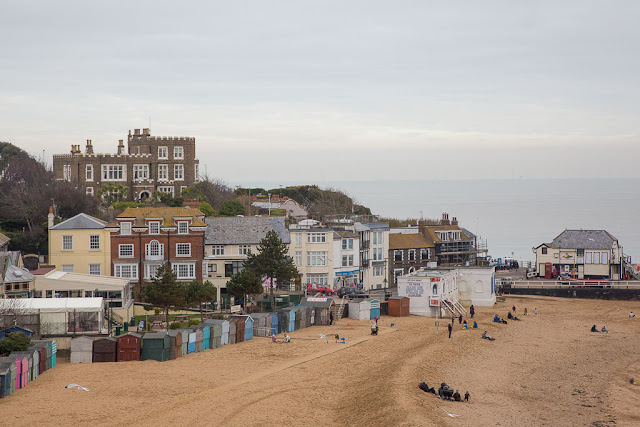 We wandered back down to the bay -- Bleak House is the castle-like brown structure at left. There's also a Dickens museum in town, but we didn't go.

Instead we went back to the Dickens pub, where had pints and a sausage sandwich (in my case) and Olga sat on my lap because she was a bit shivery on the chilly pavement.

We finally caught our train at 2 p.m., and I finished the second of my "Blind Date with a Book" novels on the way back to London. Dave read too, as did a pink-haired girl with a nose ring across the aisle -- she was engrossed in a book of Tennyson's poems. (There'll always be an England.)

We got home and Olga promptly fell into a deep, snorey sleep on the couch. She was happy to be back in familiar surroundings -- as were we all!
Posted by Steve Reed at 6:41 AM

Olga, at least, looks as though she found somewhere of great interest !
The cabanas are called Beach Huts. Normally they are rented out to holidaymakers, and are somewhere to shelter from the icy blasts and torrential rain that frequently accompany a typical English summer holiday ! These days they sell for a ridiculous price, and you practically need a mortgage to own one in more popular resorts.

Sounds like a perfect get-away, and I'm glad that butcher did not have an outdoor cart!

Olga will be dreaming about that butcher's shop window for ages to come - a fantasy world of sausages and chops where the streets are paved with liver and sirloin steaks hang from the trees. How come it's not like that on Hampstead Heath?

Thank you for sharing your get away.

Oh Olga- so close to heaven, and yet so far away!
Those little cabanas are wonderful! John Gray has spoken of them before, I think.
Well, welcome home where all is cozy.

What a great get-away you had but, of course t's always great to get back home. I love that photo of Olga looking in the shop window. Something to have sweet dreams about.

You're happy to be back in familiar surroundings but one of the best things to do is get out and do something different.

Oh, I love the shot of Olga "shopping"!

And I also love that you took her on your lap because she was cold. Olga has good people.

I love seeing England in all its expressions through your eyes. Your photos are very much how I imagine an English seaside town.