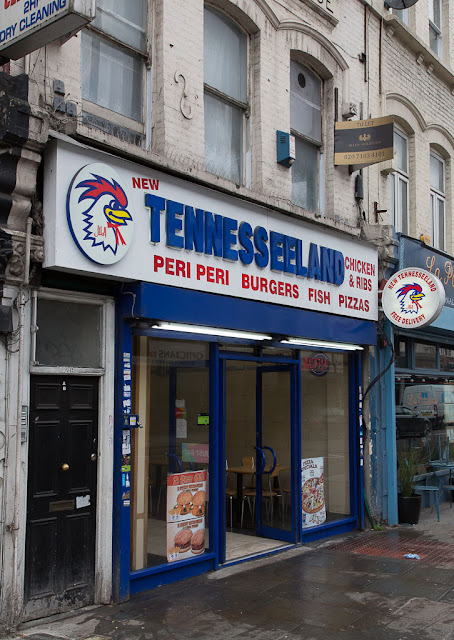 Longtime readers may remember that when Dave and I first moved to London in 2011, I was photographically infatuated by the rich variety of fried chicken restaurants. (Examples here, here, here, here and here.) These restaurants always have red and/or blue signage -- it's apparently an unspoken industry rule -- and their names often refer back to the southern USA.

Here's a good example with an unusually cumbersome name that I came across Sunday in Camden. I wonder if they had to pay by the letter for that sign?

Anyway, what can I say about yesterday. It was Monday, and I was back at work. It may not seem like it but we're already on the downslope of the school year! (That's what I keep telling myself, anyway.)

I've tried to write a politically-themed post several times but I just don't have it in me. It brings me down and I know it would bring you down, too. Rest assured I'm thinking about it all, worrying about the stability of the American government and cringing every time I open The New York Times web site.

I'm pretty sure voters in the real Tennesseeland love Donald Trump, though.
Posted by Steve Reed at 6:26 AM