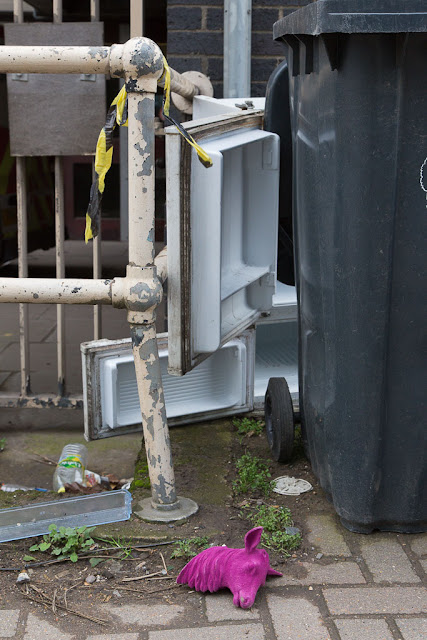 Dave planted our sea kale, which we'd been keeping in a big flowerpot, in the ground over the weekend. Apparently it needs lots of room so we're hoping it will be more prosperous there, though we'll have to battle to keep the slugs away from it. It is slugalicious.

Anyway, when he dug out the hole, he threw a lot of dirt back behind some shrubbery against our garden fence. He's disposed of dirt in this spot before. But when I looked at his mini dirt pile I realized it was surrounded by sprouting bulbs -- and deduced there were probably bulbs under it, too.

So yesterday morning, before work, I got out there with the trug, which is this huge garden bucket sort of thing, and collected all that waste soil. Sure enough, I uncovered about six thick yellow bulb sprouts -- they were doing their best, considering they'd been completely buried. Now that they've been exposed to daylight again hopefully they'll survive. I think they're probably bluebells.

I dumped the dirt at the back of the garden, where we usually put leaves and sticks and where nothing grows. I told Dave not to use that spot by the fence for dirt disposal anymore. He probably gets sick of me giving him directions.

(Photo: Rather than a predictable picture of yellow bulb sprouts, how about a pink cow and a broken refrigerator, found near Wormwood Scrubs on Sunday?)
Posted by Steve Reed at 6:44 AM