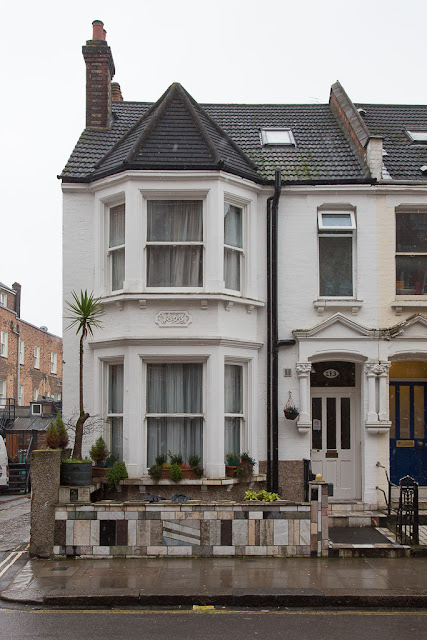 Olga and I often pass this house on our morning walks. I've always found the marble wall and front walkway a curious addition.

This photo was taken Saturday, and you can see flecks of snow falling. Yesterday's weather wasn't a whole lot better. It was definitely an indoor day. We seized the moment to walk over to Hampstead and see one of several movies we've been wanting to catch in the theater: "Manchester by the Sea," which was terrific. Casey Affleck entirely disappears into his character, and although it's slow-paced it's deeply moving and quite beautiful to watch. It's not everybody's thing, though -- I overheard one guy emerging with his wife saying, "That was terrible!" She replied, "Oh, I thought it was alright."

Even Dave liked it, though, and that's saying something for a serious drama. Recall that he did not feel the same way about "Boyhood."

So, one down, and a few more to go. I definitely want to see "20th Century Women," and I think we should see "La La Land" since it's probably going to be the big thing at the Oscars. Dave is interested in both "Arrival" and "Passengers" as well. The fact that all the good movies come out at once, in order to be fresh in the minds of Oscar judges, is quite annoying.

I slept more than nine hours last night! I feel like a new man!
Posted by Steve Reed at 7:45 AM