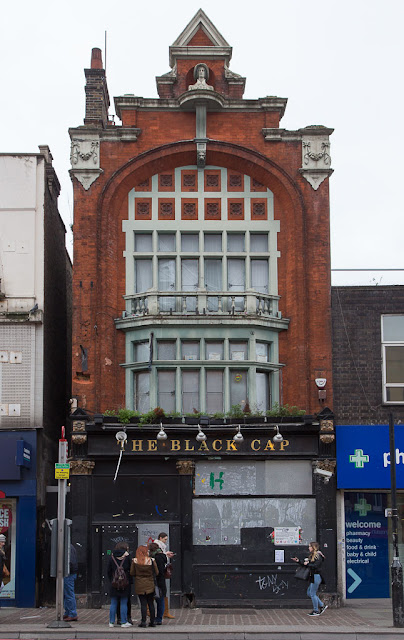 I've written before about the gradual disappearance of some of London's historic pubs. With real estate prices so high and development opportunities abundant -- especially for pub buildings, which are often quite ornate and stylish -- the pubs themselves often come under tremendous financial pressure.

Here's a pub that closed back in 2015. The Black Cap had the added distinction of being a well-known LGBTQ venue, featuring drag performers and cabaret acts. The pub was made an Asset of Community Value (ACV), a government designation that's supposed to help protect pubs from redevelopment, but sadly that distinction couldn't keep it open.

I'd been reading about this pub for a while but didn't know quite where it was until I happened to walk past it on Sunday. 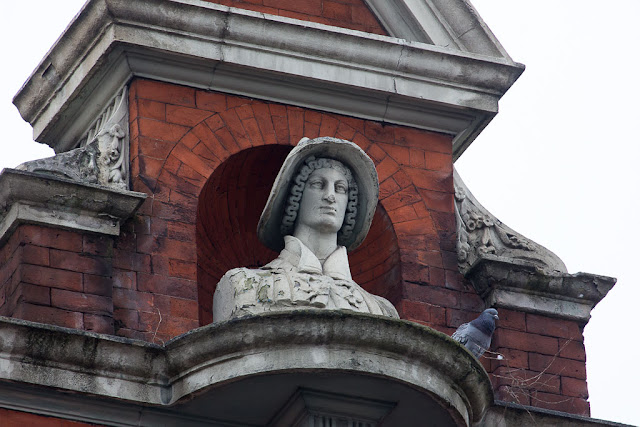 This rather dandy-looking fellow is perched up by the roof. (Not the pigeon, though he's dandy too.)

Apparently The Black Cap's owners had applied to convert the two floors above the pub into flats, but their application was rejected. I gotta say, those look like they would be amazing flats, although one wonders about noise levels, especially with drag performances going on downstairs!

At least they didn't simply tear the place down.

There's now a public campaign to buy out the pub and keep it open. Fingers crossed!
Posted by Steve Reed at 7:03 AM

We are watching the death of the traditional English pub, facilitated by government. It's the same Up North. Tragic. You may not have noticed but the bust on "The Black Cap" is a spitting image of you Steve. Quite uncanny.

Oh, man. Keep us posted. It would be a sin to see that torn down.

Wishing success for this venture - what character that building has. We have so little architecture of any age around here; I'd have a sore neck from craning if I were to travel anywhere overseas!

great building. I wonder why it was turned down for flats.

That's a very ornate building. In it's day it was very attractive.

What a unique looking building. I hope the campaign works. I wonder who that "dandy" fellow on top is supposed to be.

I imagine young people wouldn't mind the noise level if they could live in such a cool place! In New York City, I knew several people who lived above bars. I think you kind of get used to it --