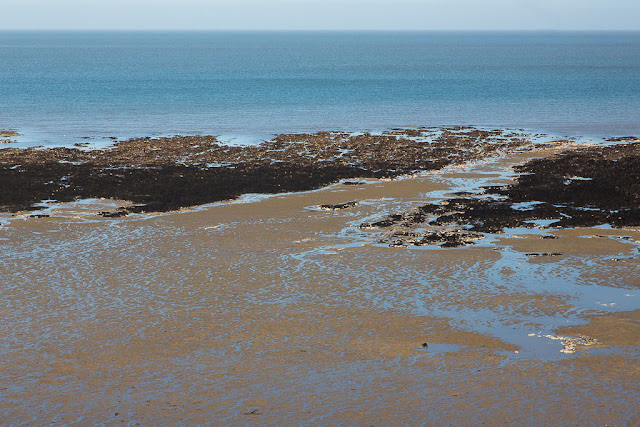 Yesterday Dave, Olga and I walked along the seaside cliffs to Margate, the next town along the coast to the northwest of us. It took a couple of hours to walk there and back -- I don't know how far it is, but surely a few miles at least. We looked down from the clifftops upon the mysterious blue maps and abstractions left in the sand and seaweed by the retreating tide. 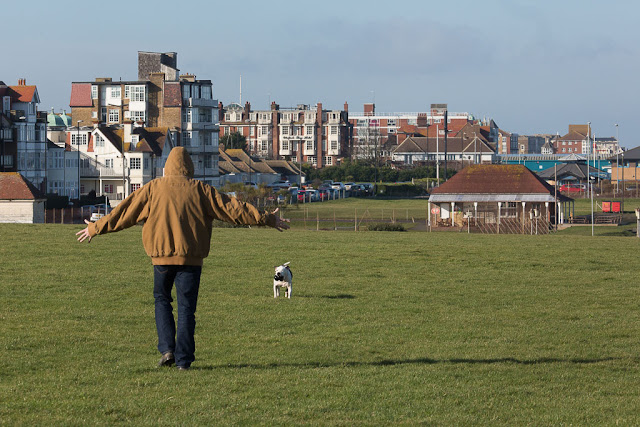 Olga got about as much exercise as a dog could stand, I think. She enjoyed chasing her Kong in all the grassy areas along the way. (It's basically one big park.) And once again, we had a sunny day! 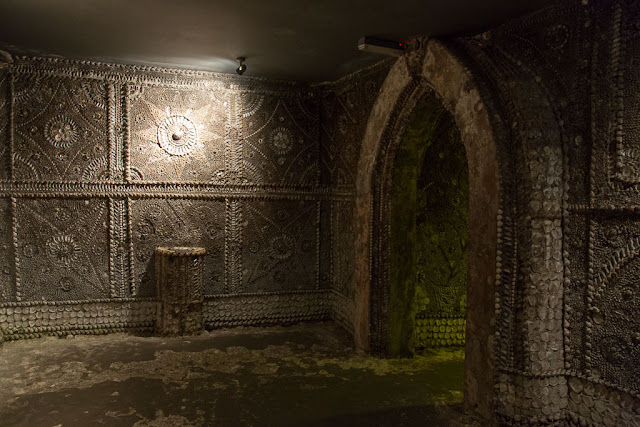 I figured we needed a destination in Margate, and while checking out the town on Google Maps beforehand I saw an intriguing landmark called "The Shell Grotto." Turns out this is an underground passageway and chamber covered with 4.6 million seashells in various patterns. What saves it from being a merely kitschy tourist attraction is that it's really old and mysterious -- apparently it was re-discovered in 1838 and opened to the public, but its origins are murky. 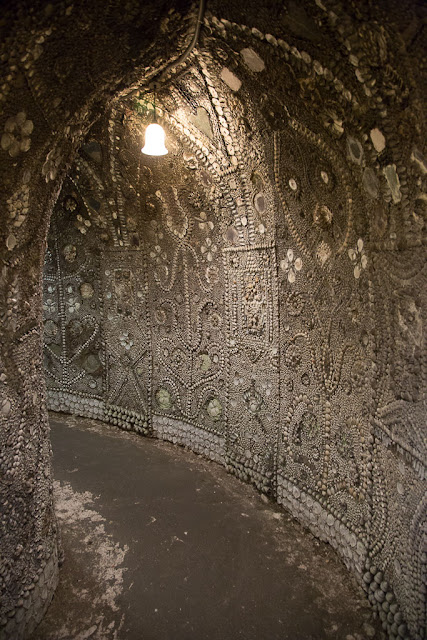 Is it a medieval devotional chamber? A Renaissance curiosity? A Roman relic?

My guess is, it was some wealthy guy's garden decoration, but who knows? Apparently carbon dating is expensive -- and it's unreliable unless they test several portions, because the grotto has been repaired and restored over the centuries -- so that hasn't been done. But it is historically listed and I love weird stuff like this, so I got a kick out of it. Dave stayed up in the cafe with Olga, watching an over-energetic boy break not one, not two but three items in the gift shop, which his poor beleaguered mother then had to buy. 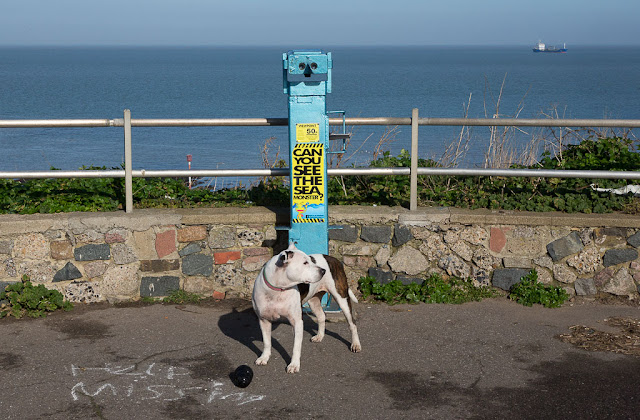 We walked back along the cliffs, wearing the dog (and Dave) out even more. When we got back to the room, Dave declared, "No more walking!" But we did manage to stagger out to a nearby pub, the Captain Digby, for an evening pint before dinner. Unfortunately Olga wasn't allowed inside so we spent a chilly half-hour at a picnic table in the "beer garden" (aka the parking lot). That brisk ocean air!

Today we're going to check out the town of Broadstairs before getting on our train for home.
Posted by Steve Reed at 7:32 AM

After all that walking, I think Olga is seeking new owners because she has written "Help! Missing!" on the pavement (not the sidewalk). Sounds like it has been a great little coastal break.

You have the absolutely best vacations. I love your descriptions. Plus, the fact you take Olga everywhere with you makes them even better!

That poor dog...She's in no danger of being fat or bored...

I want a shell grotto with all of my heart!

I've seen pictures and read about the Shell Grotto on-line. How cool that you got to see it for real.

That shell grotto is very unique, well worth a peek inside.

Whoever made the shell grotto was quite artistic indeed. And that shot of the "blue maps and abstractions" - beautiful, especially with that description!

I would have explored the Shell Grotto as well. Curious.

I wonder how many people find the strange place you found? Curious people find some pretty odd things.