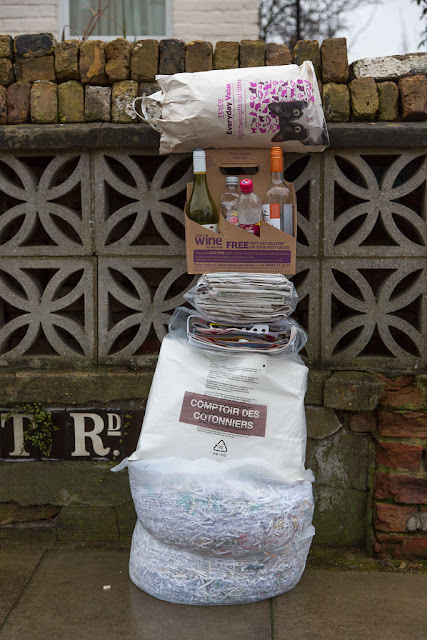 The other day one of my commenters mentioned that she picks up rubber bands (or elastic bands, as they're often called here in Britain) when she takes walks. Otherwise, she said, birds could mistake them for worms and eat them, with fatal results.

I'd heard of sea turtles mistakenly eating balloons, thinking they were jellyfish, but I'd never heard of this rubber band phenomenon. It filled me with dread because I see rubber bands all the time when I'm out walking the dog. I thought I'd pick some up, too.

(Coincidentally, I needed some rubber bands at work, so I could also put the ones I collected to use!)

On Sunday alone, I collected 32 of them. I think the mail carriers just toss them on the ground as they distribute the mail, which is banded together in the sorting process. I had so many that eventually I stopped picking them up, but I saw at least a dozen more. It's like trying to hold back the tides!

I have to hope that in London, our birds are smarter. Maybe they've evolved to differentiate between rubber bands and worms. Let's hope. Because this problem is beyond me.

On another ecological front, we are putting our new food recycling bin to use. It's not grossing me out so far.

Dave is sick again. The poor guy just cannot catch a break. I really think his surgery last year knocked his immune system out of whack. He's sniffling and has a fever of about 101º F. He called in a substitute teacher today -- he's staying in bed.

(Photo: Someone's tower of recycling, in West Hampstead.)
Posted by Steve Reed at 6:35 AM