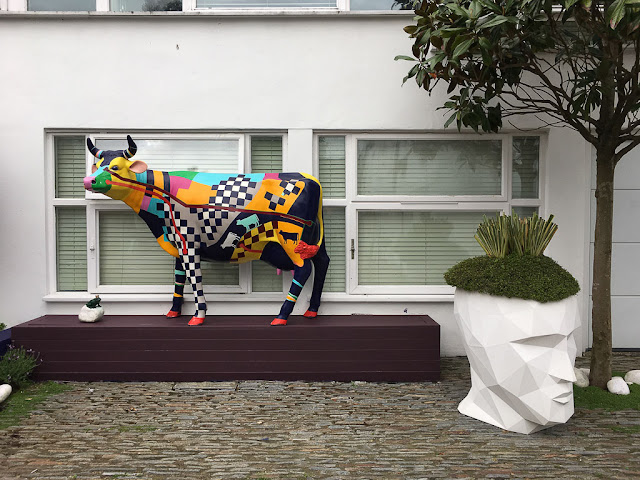 I've been experimenting again with Twitter. I know, I'm a decade behind, but I've learned that it's a good way to keep up on very local news and events. If you can "follow" a couple of people who are observant about what's going on in your neighborhood, you can learn a lot.

I've tried tweeting a bit -- I asked what those hay-covered cages are at the cemetery, for example -- but I didn't get any responses. Maybe because no one follows me? I tried to direct the questions to others using the @AccountName method, but maybe they still didn't see them. I did find out, though, that there was a wildlife habitats workshop at the cemetery a week or two before those cages showed up -- so I'm sure they're somehow related to that.

I also learned about the existence of this groovy cow (above) in a mews in West Hampstead. I've taken pictures there before, but that was before the cow showed up. I photographed it yesterday morning on my way to work.

I'm still ambivalent about Twitter (I deleted my seldom-used original account several years ago) and I don't think I'll be on it a whole lot, but I think it might come in handy here and there. And no, I'm not going to follow Donald Trump.

Speaking of things that make us cranky, I had the crankiest morning yesterday. It was just one of those days when everything annoyed me. We're coming up on lease renewal time for our flat, and I always get tense at about this time, imagining that we'll be evicted and have to go live somewhere else. So that was part of the problem...

...and then I snarled at a woman at work. I was trying to get coffee in the staff lounge, and a gaggle of people were standing around the machine, taking their time and chatting and not really getting coffee, so I was waiting for access. And another teacher swept in, pushed through the gaggle and set her cup on the machine. I stepped up to her and said, "I WAS WAITING" in a not very friendly voice. And then I felt terrible, thinking, "Oh, Lord, I need to work with this woman." So I walked it all back and apologized, and told her I was having a bad morning, and she let me get my coffee, and then I sent her an e-mail apologizing again and she came down to the library and we had a good laugh about it. So all's well that ended well.

But, just for the record, she did jump the queue.
Posted by Steve Reed at 6:20 AM