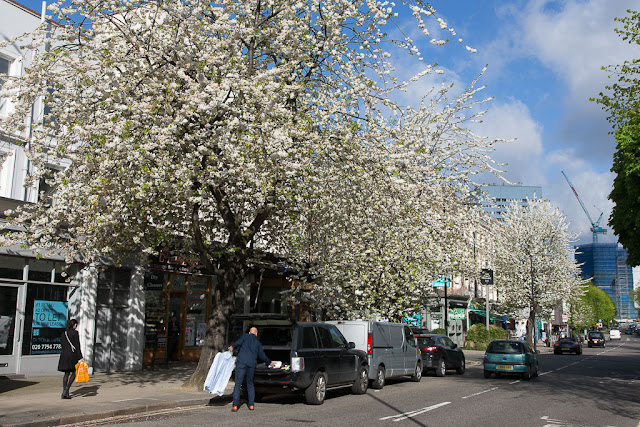 Another picture taken earlier this week during our short erstwhile spring, which now appears to be in retreat. Here's what we're in for, according to Weather.com: 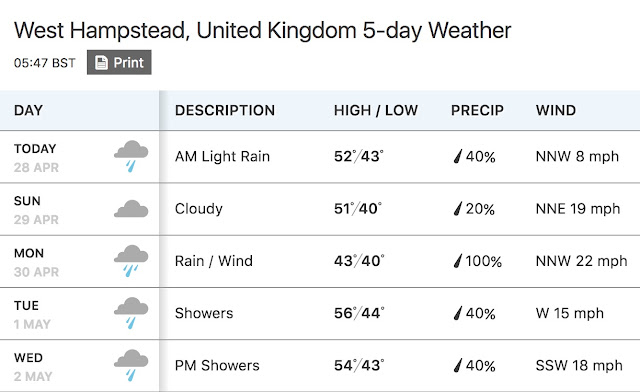 Those temps are in Fahrenheit, obviously. Despite living in the UK for almost seven years, I still haven't managed to learn temperatures in Celsius. If someone says to me, "It's going to be 18 degrees today," I have no concept of what that means. It could mean boiling hot or freezing cold. I'm like an old immigrant grandma, wearing her babushka and stubbornly unable to speak the local language.

Anyway, the point is, the weather's not looking so great. I'm trying to keep in mind that "April-showers-bring-May-flowers" cliché.

Speaking of which, my wildflower bed is doing a whole lot of nothing. I've put four packages of seeds on it, and I have some tiny, tiny sprouts, but they're not really growing. Is it just too chilly out there? Maybe I didn't prepare the soil enough. But I keep thinking, they're WILDflowers. How much preparation do they need?

And what is Kim Jong-un up to, anyway? How did he go from being a swaggering tyrant threatening to blow us all off the planet to a cuddly, smiling peacemaker? Once again I feel, as I have so often felt over the last two years, like I'm navigating the Twilight Zone.

I'm sad about Bill Cosby -- not that he was convicted, because I believe those women and he should have been convicted. But I'm sad that someone I looked up to for so many years, someone I thought had his heart and morals in the right place, turned out to be such a hypocrite. I mean, we all make mistakes and we're fallible beings, but his behavior goes beyond mistake-making. I've admired Bill Cosby since the days of "Fat Albert," and I hate to have to let that go.

And now apparently Trump is coming to England. One of my colleagues has an apartment near the U.S. Embassy and she has pledged to have a party for anyone who comes and protests his visit. I would protest anyway, but who can resist the added enticement of a party?

I made an appointment to go back to the dentist in about a month to have my temporarily-filled tooth crowned. As I lay in bed last night I thought about how absurd this whole procedure has been -- if you count my last few checkups with my previous dentist, when I began complaining about pain in that molar, it all adds up to seven appointments to get this tooth fixed. Does that not seem completely insane? To get the tooth crowned I need two, and I needed two for the root canal, plus the initial consultation with the new dentist after two failures by the previous dentist to find anything wrong. SEVEN appointments. And actually eight, because I had to pop in a month and a half ago for that extra round of antibiotics.