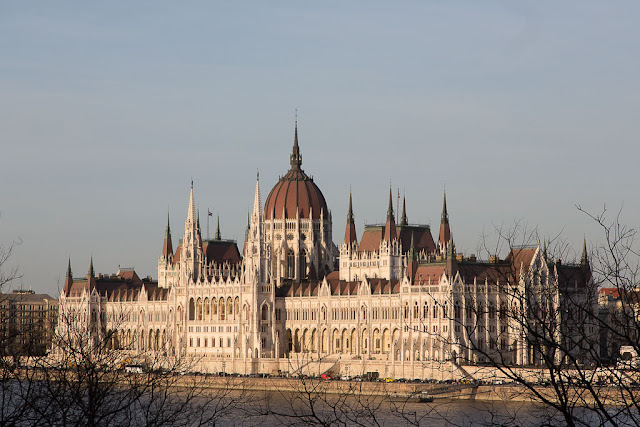 We made it to Budapest just fine. And this is the view from our hotel room! How spectacular is that?! It's the Hungarian parliament building, completed in 1904, which our taxi driver told us is the second-largest parliament in Europe. I have no idea whether that's true or not, but it sounds good to me.

When I booked our hotel I specifically intended to face the river and this view, and I was alarmed to find upon check-in that I had booked a "castle view" room, which it turns out is on the other side of the building. Fortunately the hotel moved us with no problem! I guess I thought this was the castle. Just FYI, in case you come to Budapest, it's not. 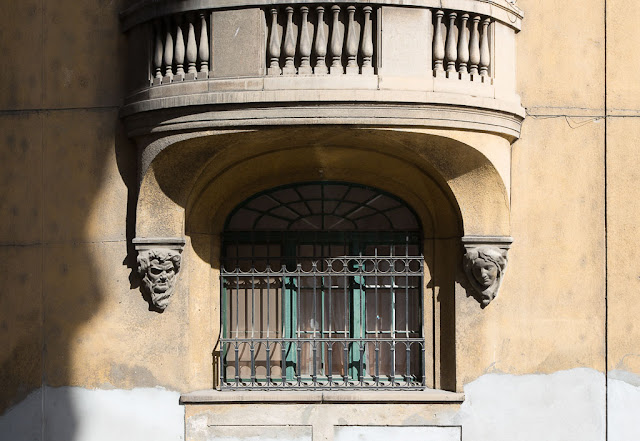 There's lots of interesting and ornate architecture and we were blessed yesterday with sunshine, which I feel like I haven't seen in weeks! The temperatures are comfortable -- no jacket required. Dave and I have finally been released from the chilly grip of our London spring. 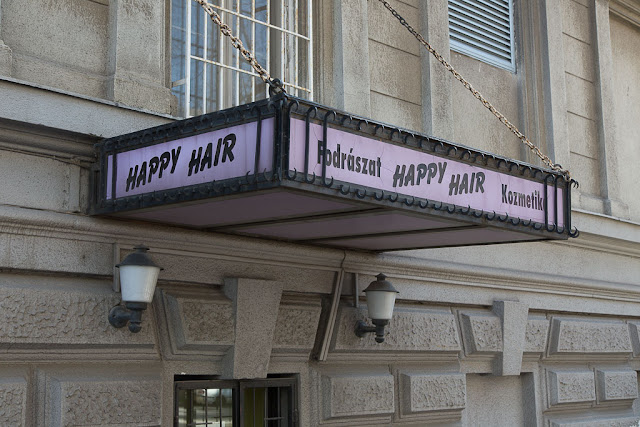 After we checked in to our hotel we set out to find lunch. We ate at a sidewalk cafe across from this high-spirited beauty salon. I ordered goulash soup -- because one of the few things I know about Hungary is that it's the home of goulash -- but it turns out goulash and goulash soup are not quite the same thing. It was basically meat soup with root vegetables. Not bad!

My stepmother used to make Hungarian goulash with noodles and ground beef and tomato. I have no idea where she got the recipe or whether it's at all authentic, but I'll try some actual goulash at some point and we'll find out! 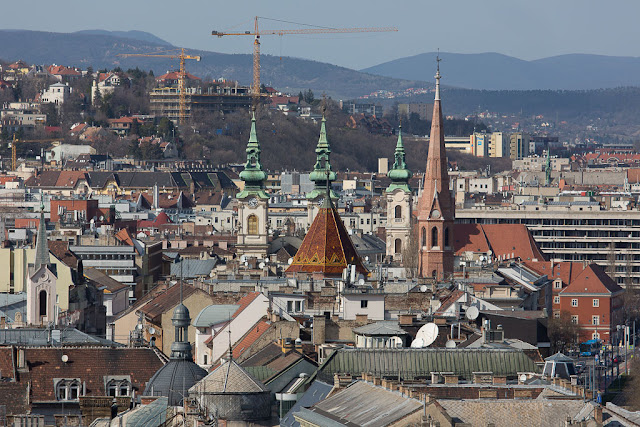 After lunch we walked to the funicular that carries passengers up the steep hillside to the castle. We're on the Buda side of the river, across from Pest. Here are some of the rooftops of Buda. 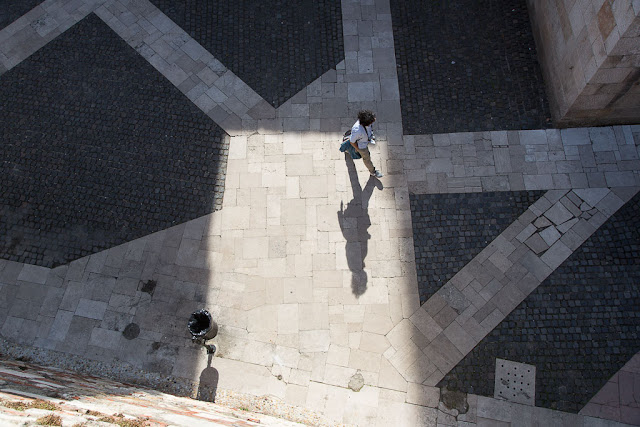 We walked around the royal palace, which is now a museum and has been extensively rebuilt several times after being destroyed in a succession of wars, including World War II. From there we went into the old town. 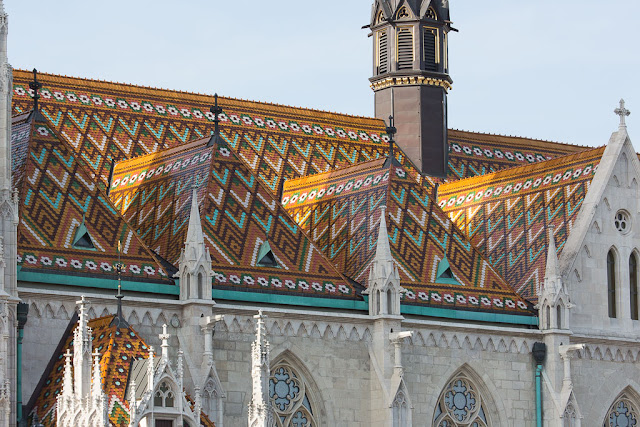 We passed the incredibly colorful Matyas Church, and walked up onto the turreted viewing terrace known as the Fisherman's Bastion, which overlooks the city. 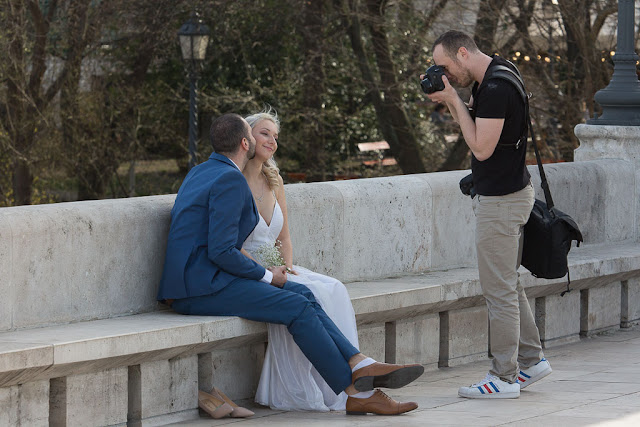 We kept seeing this young couple, out for the day to take their wedding photos. The woman carried her shoes the whole time. We called her the "Barefoot Bride." 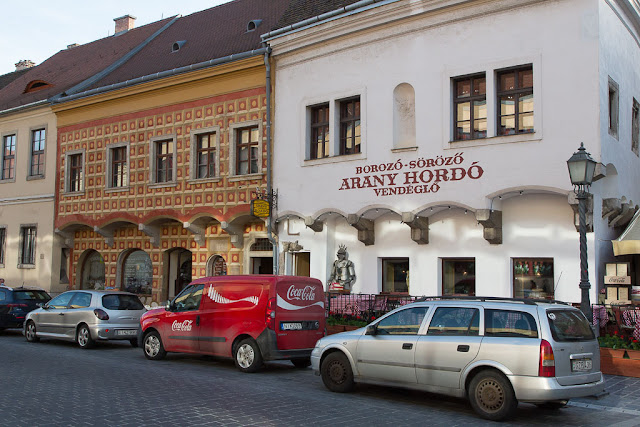 From the Fisherman's Bastion we walked back down the steps of the steep hill and back to our hotel. Last night we ate at the hotel -- Wiener schnitzel for me, and a crazy dessert made from lime sherbet and vodka! And then I went out to take one last shot of Parliament: 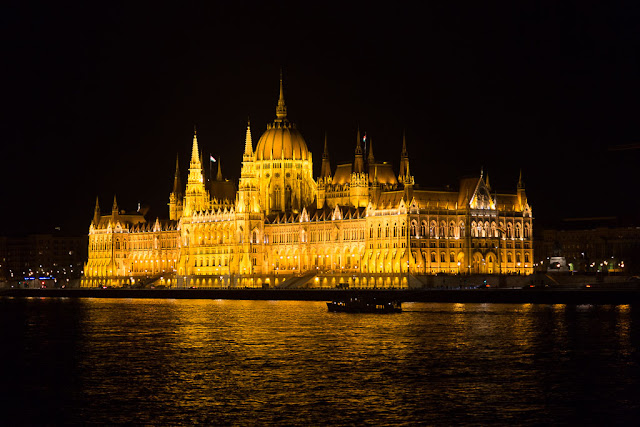 Those lights don't stay on all night. I woke up in the early morning and looked out, and most of them had been switched off. So we are being energy-conscious here in Hungary!
Posted by Steve Reed at 6:04 AM