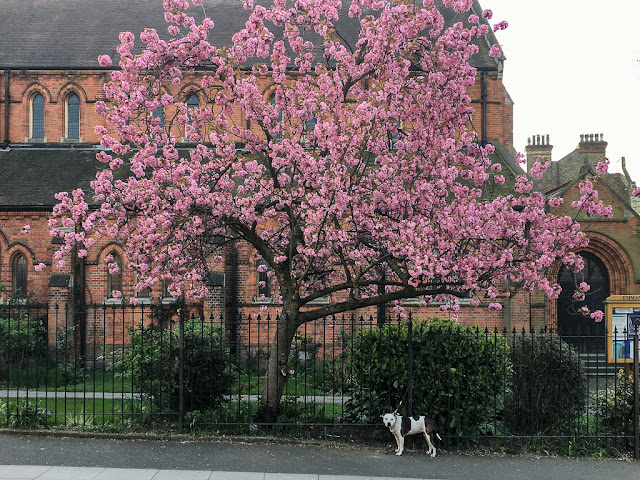 It's pink tree season here in London -- the cherries are out and looking vibrant. Olga was especially impressed with this one. (OK, I was impressed and Olga was indifferent.) 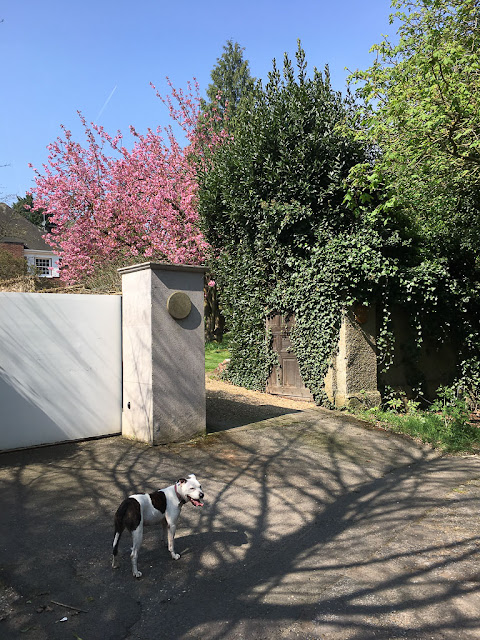 And then there was this one, which we found in Hampstead on the way to the Heath. It had musical accompaniment from someone in a nearby house who was playing the flute. Not some middle-school kid, either -- someone who knew what they were doing, which gave the scene a very cultured air. I love it when spring comes and people open their windows and share their sounds with passersby.

We passed another house in Hampstead where electric guitar was pouring out of the windows. Good electric guitar. I thought, is that a record? Or maybe someone famous lives there, and they're practicing? Could I be passing the house of a '60s rock legend and have no idea?

It was a perfect day for walking, overall -- sunny and cool. And then we got quite a bit of rain in the night, and now, this morning, it's sunny and cool again! Ideal garden weather!

Speaking of which, I think the slugs are eating my wildflower sprouts. Argh! I thought, being wildflowers, they would be somewhat immune to pests. But apparently not our pests, which are seemingly bionic. I just went out to look at the seed patch and there were several little worm-like slugs crawling around on it, and some gnawed leaves on the sprouts. I also interrupted two earthworms mating, which was a puzzling sight. (Sorry about that, worms!)

Yesterday I ran some errands on the high street. A new-ish bakery moved in a few months ago, down by the Thameslink station, and I've decided I don't like that place at all. It's just a little too twee. Dave and I went there once and I think we concluded it was fancy looking and a bit expensive and just not very impressive. Plus they have a dog bowl out front that never has any water in it. It's always dry as a bone. Olga sticks her nose in it every time she passes and comes up with nothing. Somehow I find that incredibly annoying.
Posted by Steve Reed at 6:33 AM