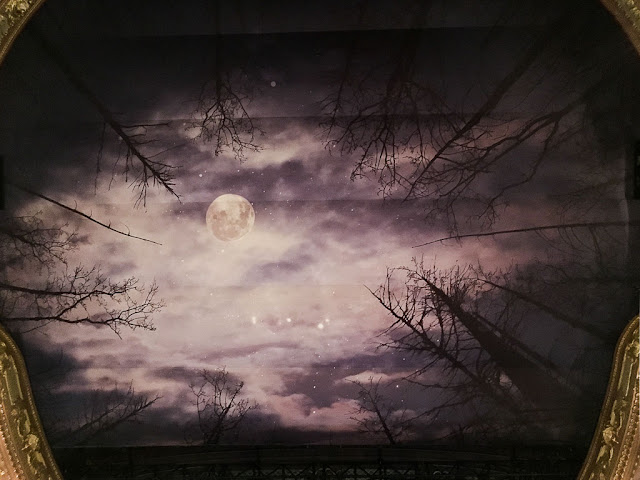 I have been really lazy about taking pictures this week. The weather's been terrible -- gray and rainy and drippy and soggy, and I just haven't been motivated to get out and walk around with the camera. I haven't seen sun since Hungary.

Spring in the UK feels like it's about a month behind. This is March weather.

So, anyway, the only picture I have today is this one, of the ceiling of the Apollo Theater, where we saw "Everybody's Talking About Jamie" on Wednesday. I wish I could have zoomed even farther out, to show the ornate gilded walls, statuary and balconies, but this is the best my phone camera could do.

As I've mentioned, Dave is now on a gluten-free diet, and he feels very strongly that it's helped him better control his Crohn's. Among other now-inedible-to-Dave food items in our kitchen, we had an unopened box of Aunt Jemima pancake mix and an unopened bottle of Aunt Jemima syrup. They were both bought in London, but imported from the USA, and I hated to throw them out. (The syrup is obviously gluten-free, but I didn't see how we were going to eat that without the pancakes -- and besides, we have some real syrup that Dave's sister in northern Michigan made from maple trees.)

Dave said he thought that was a weird thing to do, and I must say, when I conceived of the idea it didn't seem weird, but actually doing it felt a bit strange. Is it weird to give unopened food to a coworker? What do you think?
Posted by Steve Reed at 6:58 AM