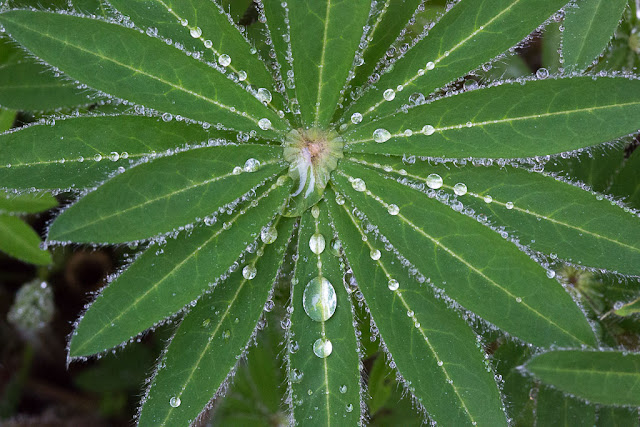 Yesterday was gray and drizzly, but Dave managed to spend quite a bit of the morning in the garden. I don't know why, but I have incredible anxiety about what he does out there. His vision and philosophies about gardening tend to differ from mine, and he loses patience with plants very quickly. Consequently, he likes to move plants around, throw them out, replace them or prune the daylights out of them. He's also not very careful about allowing native plants or volunteers to grow.

I, on the other hand, tend to be much more passive about gardening. I like allowing nature to do its thing. I like the unexpected surprises, like the forget-me-nots that magically appear every year, and I dislike any activity that might disturb them before they can mature. And my philosophy on plants is basically that you put them in the ground and leave them there. Unless something is in a drastically wrong location (i.e. a shady spot when it needs sun) you don't move it. Plants need time to establish themselves, and every time they get dug up and relocated it shocks them -- sometimes fatally.

So, anyway, yesterday -- while Dave enlarged a flower bed and moved several plants -- I basically stayed inside and tried not to think about what he might be up to. I must say, my anxiety isn't entirely realistic, because our plants have mostly proved to be pretty resilient and few of the ones that he moves actually die.

I probably need to chill.

In other news, I can't believe that I didn't mention this yesterday but on Saturday morning I FILED OUR TAXES! Woo hoo! It's always SUCH a relief to get that done. As U.S. citizens we still have to file with Uncle Sam every year, even though we live abroad, and it's still a nightmare. In the end we don't usually pay anything because there's an exemption on foreign earnings and we pay taxes here in the U.K. It's mostly just a couple of hours of unpleasant paperwork.

I spent most of yesterday reading a book called "People Who Eat Darkness," about the abduction of a young British woman in Tokyo in 2000. It's a really good book -- a riveting story -- so much so that I didn't want to put it down.

But when the rain paused in the afternoon, I managed to take Olga back to Fortune Green and the cemetery for another very damp walk. We found a second wire-and-hay contraption like the one I depicted in yesterday's post. Still very mysterious.

(Photo: Rain on a lupine leaf in the garden.)
Posted by Steve Reed at 6:11 AM