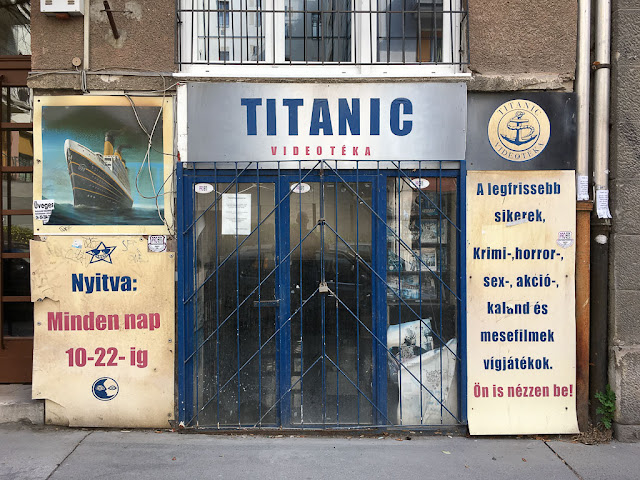 We're back from Budapest, with laundry churning in the washing machine and (hopefully) Olga on her way back to us today.

Before we left late yesterday morning I had a bit of time to kill, so I went wandering in an area not far from our hotel. I found this time capsule of a video shop -- I don't think it's open anymore. There are still some movies displayed in the window but they all looked pretty faded and about ten years old.

I also played around with Waterlogue and produced a souvenir "watercolor" of the Hungarian parliament building in shadow: 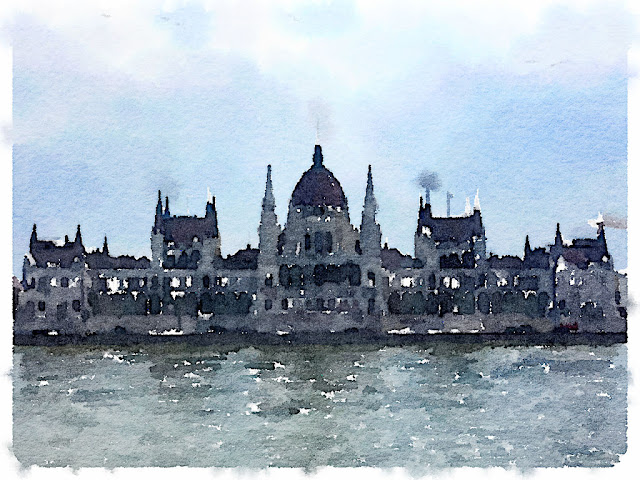 Then we hopped in a taxi and headed to the airport, listening to a retro radio station that played songs like Gazebo's "I Like Chopin" and The Monkees' "Last Train to Clarksville." It was surreal listening as we rode through the rusty industrial landscape of outer Budapest.

I bought some expensive wine in the airport to use up my last Hungarian forints. (I'm thinking we'll save it for our Eurovision-watching party in May!) The flight was unremarkable, but it reminds me that I meant to tell you about a guy we saw at the airport when we were flying to Budapest last Tuesday. He was near us in the passport control line, and he had a ninja throwing star tattooed on his face and carried a backpack printed with pictures of marijuana leaves. The guy was basically a magnet for a strip search by customs. I didn't hang around to see what happened.

Anyway, we're glad to be home. It won't feel real until Olga gets here!
Posted by Steve Reed at 8:19 AM