Lenin and the White Cat 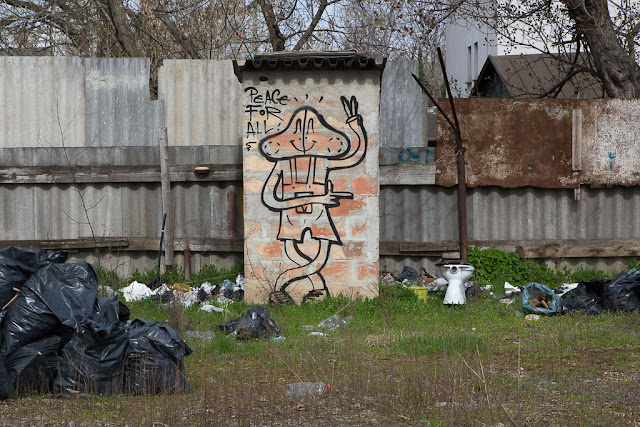 Dave and I set out yesterday morning for Memento Park, where some of the most memorable artworks from the former Communist government of Hungary has been exiled. (The little guy above is not an example -- I just happened to photograph him along the way.) 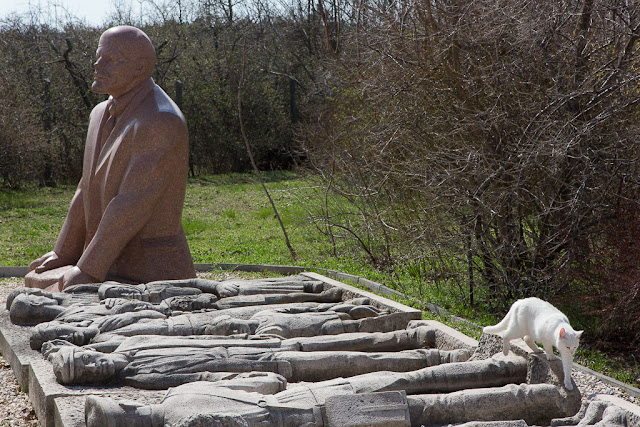 After Communism fell in 1989, the new government debated what to do with all those imposing bronze and granite and limestone artworks commemorating the likes of Lenin, Marx, Engels and the imposing power of the state. (And also the "friendship" between Hungary and Russia, in which Russia always seemed -- and was --dominant.)

Rather than demolish it all, the government built a special park outside the city to house it for historical purposes. I really wanted to visit, because when I was growing up, Hungary was one of those mysterious countries behind the "iron curtain" that I never expected to see first-hand -- and it seemed only fitting to at least touch base with that Hungary of my memory. 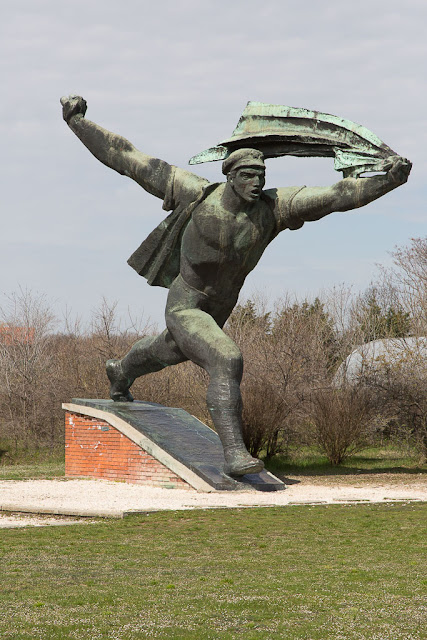 Those Communists were a subtle lot, weren't they? All the statues looked like this -- massive, bulky, powerful and a little scary.

Getting to Memento Park was fun because we had to use public transportation. We rode a tram and then a public bus. I always feel like I have a true cultural experience when I'm rubbing elbows with the locals on public transit! 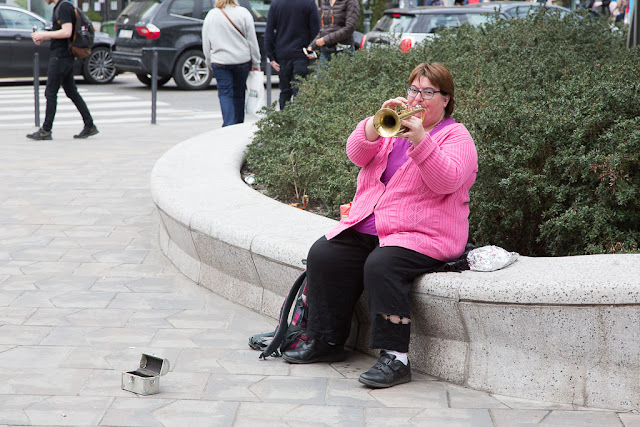 When we got back into town, we went to lunch in a little bistro where I had paprika chicken with dumplings (spaetzle). Outside, this woman was playing tunes like "Alexander's Ragtime Band" and even the theme from Benny Hill on her trumpet. She was really good. We gave her some money. 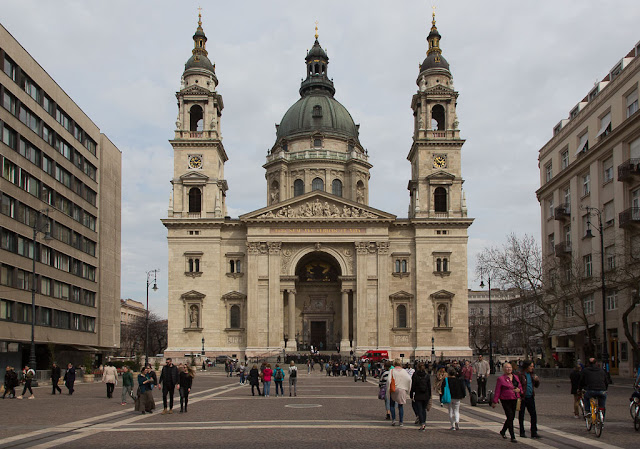 Dave was feeling tired, so at this point he went back to the hotel, and I went walking. I'd seen lots of things from the bus window the day before that I didn't have a chance to photograph, so this was my chance to catch up.

I visited St. Stephen's Basilica, where I had coffee and a chocolate muffin in the plaza. Then I walked over to Parliament and around that part of town before catching the metro... 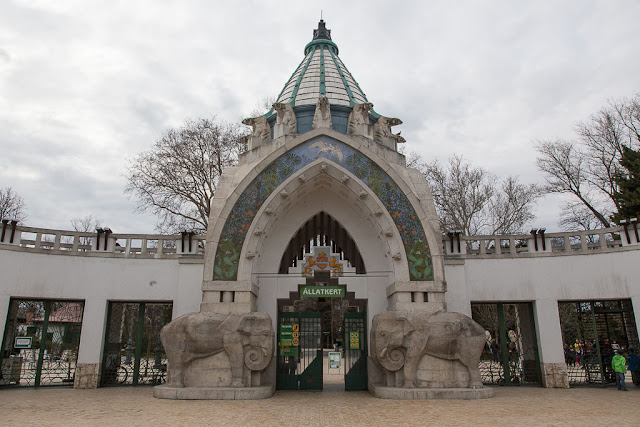 ...and going to the zoo! I didn't go in. I just wanted to photograph the fabulous Art Nouveau entrance gate, with its elephant guardians and crown of polar bears. 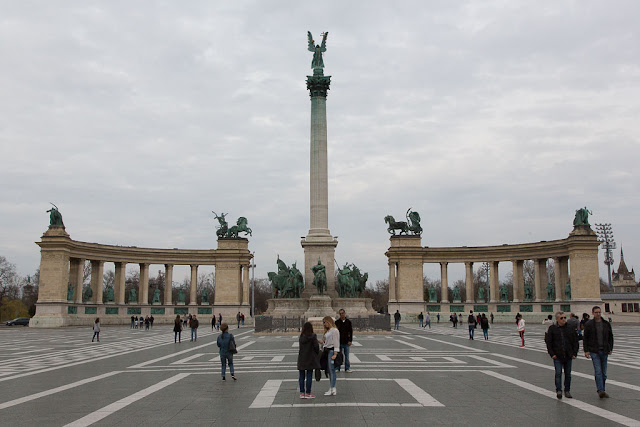 From there I went to Heroes Square, a massive plaza that commemorates the heroic figures in Hungary's history. (I think some of the Communist statuary that I saw at Memento Park used to stand here.) 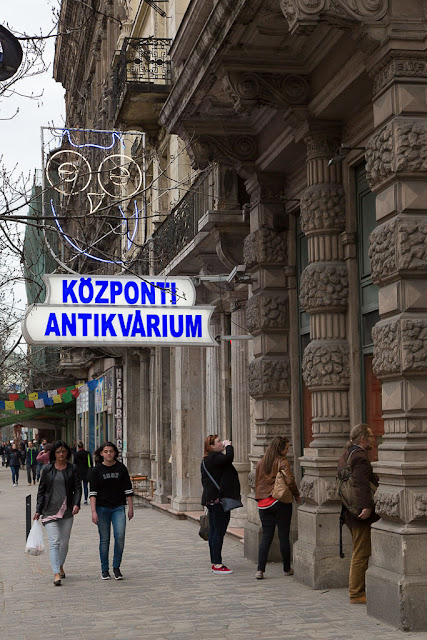 And then I went on a crazy odyssey to find some great old signs I'd seen from the bus, including this neon owl outside an antiquarian book shop. I walked a really long way, but it felt good. 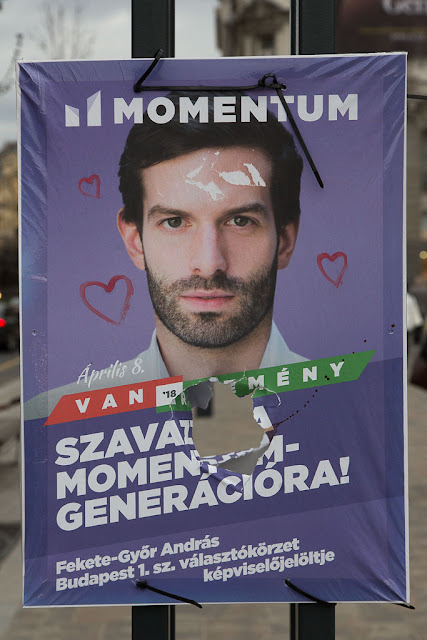 I also came across lots of campaign posters. Hungarian parliamentary elections are scheduled for April 8. This young guy, who has been dubbed by Politico as one of Hungary's "hipster patriots," clearly has at least one fan -- who, frankly, doesn't seem motivated by politics!

I walked back to the hotel room and met up with Dave, who had happily spent the afternoon napping and watching "Star Trek:Voyager" in German. (!) We went out to our favorite sushi place for dinner once again -- sushi being good for Dave on his gluten-free, mostly vegetarian diet.

Today we're homeward bound!
Posted by Steve Reed at 7:26 AM