A Bag Goes to Brighton 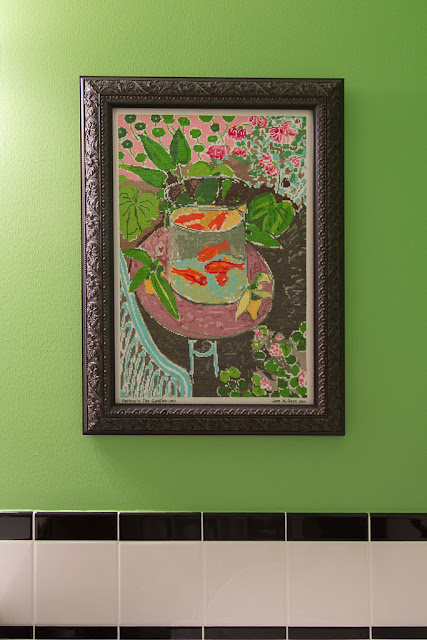 Well, Dave and I survived our trans-Atlantic adventure and are now ensconced in my stepmother’s guesthouse outside Tampa. I’m writing this at 4:09 a.m., because of course to me, it’s 9:09 a.m. and way past when I would normally be waking up. The photo is a cross-stitch (I think?) that my stepmother made of one of Henri Matisse's goldfish paintings, hanging in the bathroom of the guesthouse. I haven’t had a chance to take a picture of anything else yet.

I’m just happy we got here, after our adventures yesterday morning! I thought our big obstacle would be getting the dog launched — but as it turned out, that was no problem at all. Simone’s partner showed up bright and early and collected Olga, who went uncomplainingly. Dave and I finished packing and set out ourselves around 8:45 a.m. Our flight wasn’t until 12:30, but we figured it would take an hour to get to Gatwick, and why not build in a little extra time?

We are so lucky we did, because things went awry at the airport.

Dave and I got off the train from London and were walking into the terminal when Dave suddenly realized he’d left his shoulder bag — containing his school laptop — on the train. He ran back but it was already gone, headed for Brighton.

We went to an information desk where an attendant called ahead, and a half-hour later, after the train had arrived in Brighton and been perfunctorily searched, word came that Dave’s bag could not be found. Fortunately that same train was due to turn right around and come back to London via Gatwick, so we waited some more and while I stood in the terminal with our luggage, Dave met it on the platform, determined to search it himself.

Humming the theme music from “Mission: Impossible,” Dave popped in and out of the train carriages during the two minutes it was at the airport station, and just as the doors were about to close, he saw his bag through a window, sitting on an overhead shelf. He leaped in, grabbed it and leaped out again. Job done!

Of course, this whole adventure killed more than an hour of time, and we weren’t even checked in for the flight. But fortunately we flew through check-in and security and we even wound up waiting (briefly) at the gate before boarding, so we didn’t even cut it that close.

And this, people, is why you always give yourself lots of extra time when you go to the airport!

The rest of the flight went smoothly. I read three New Yorkers and a YA novel called “Incident at Hawk’s Hill,” about a boy on the Canadian prairie who befriends a badger in 1870. It was a Newbery medal finalist when it was published back in the early ‘70s, and it was good, but parts of it seemed pretty unlikely and of course (spoiler alert) it doesn’t end well for the badger. Bet you couldn’t see that coming!

I’m not sure what we’ll get up to today, but it needs to involve some photography.
Posted by Steve Reed at 10:43 AM