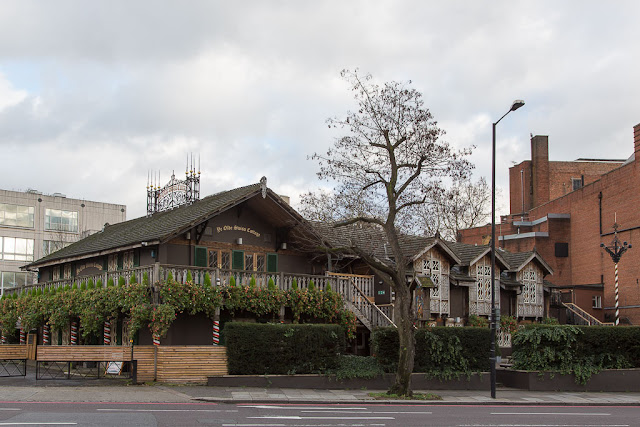 This is a pub in Swiss Cottage, a neighborhood to the south of us. It's called, appropriately, Ye Olde Swiss Cottage. It's just about the only thing in Swiss Cottage that looks even vaguely Swiss. Otherwise, the area is a snarl of traffic and bus lines and major roadways. The pub, in fact, is on what's essentially a big traffic island, along with a cinema, a block of flats and some other small businesses. I've never been inside, but the exterior looks especially nice in the spring and summer, when there's outdoor seating and the place is festooned with flowers.

Simone did come to take Olga yesterday, but we had some confusion over the time. She eventually showed up about 10 a.m., long after I thought she'd be here, and I had trouble calling or texting her, which was strange. But once she arrived everything was fine and Olga happily went on her walk, and we're supposedly on for Simone to collect Olga for dog-sitting tomorrow morning, early. I'm a little apprehensive because we need to get out of here to catch a plane. Fingers crossed!

I got some more Christmas shopping done yesterday. I took a walk along our high street and popped into the bookshop, the cookware store, the chocolate shop (yes, there is one!) and even one of the thrift stores, and I got everyone taken care of. And I supported our local merchants, which I really wanted to do.

I also made reservations at a high street restaurant that Dave and I have been wanting to try, called HAM. There's a horizontal line above the A -- a character I can't seem to create on this keyboard -- and we've always wondered how to pronounce it. Is it "ham" like the meat, or "hame," or something in between? So we asked last night, when we went for dinner, and it's apparently "hom," more or less. Anyway, it was an enjoyable evening and although we thought the food was consistently under-seasoned it was otherwise very good. Just bring your own salt and pepper.

This morning when I got up a blackbird was singing away on the street outside our flat. I stepped outside to record it. It was still dark and I was reminded of the Beatles song, even though it was the cusp of dawn and thus not quite the "dead of night." Still, I suspect Sir Paul must have been inspired by hearing a similar bird on his street, back in the days of Swinging London.
Posted by Steve Reed at 8:06 AM

Beautiful blackbird song !. Not heard one for quite a while.
Wishing you a safe journey to USA. x

Did you have ham in HAM or a hamburger? I ham surprised that the establishment wasn't in Ham or West Ham where locals favour jellied eels. Have a safe trip to Trumpland and I hope that Nina Simone arrives early enough to collect Olga.

Nice rendition of the song...I hope you have a safe trip and a wonderful time and give my regards to your family.

I just recently learned that "Blackbird" was Paul's attempt at a civil rights song.
Whatever the inspiration, it is a beautiful song.
I hope your flights go well.

nice recording and good job on getting your gifts.

It's always a tense time when you're preparing to travel. Safe and happy travels.

Oh that was wonderful! The changing city scape of the blackbird song. Cheerful though who knows , it could be singing about bus exhaust, we don't know, but it certainly sounds lovely- made my day!
Since everyone has everything they want or need , we are not doing gifts, that said, Erik sent two TUSHIE bidets for me to hook up to our toilets. A little spa for the bum.

Modern technology is an wonderful thing. Here I am almost 6000 miles away and listening to a bird singing in London. A very loud bird at that. I always loved that Beatles song. Good job finishing up the shopping and doing it locally.

That recording is fascinating in that with the exception of the bird singing, it sounds absolutely still in that huge metropolis. I certainly would have investigated the Swiss pub by now if I lived over there. Enjoy your trip and your vacation! Oh, and Merry Christmas!

Thank you for that blackbird singing. I don't think i've ever tuned in to that particular sound before.

Love hearing that blackbird sing. Have a safe and wonderful trip. Looking forward to seeing what you see on your Christmas adventure.

Love the song Blackbird. Canada's Sarah McLachlan does a really good job of this too. Your recording is so clear! No ambient noise, which surprises me.

It's a good thing you had a trial run with Olga's walker! Have a safe trip and good visist with your families.

I was being a bit tongue in cheek but I prefer actual birdsong to music...