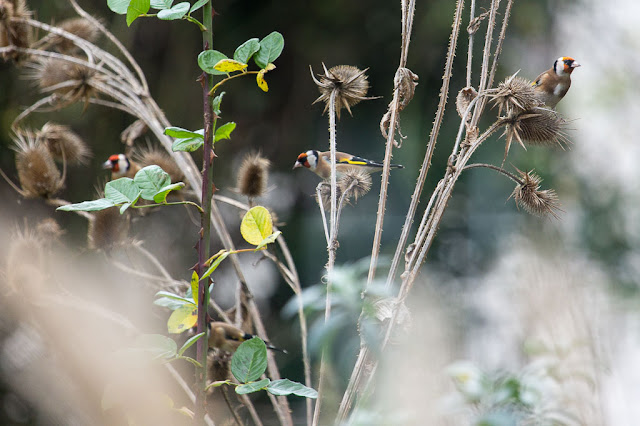 Last year, after our teasel plants died back in the fall, Dave and I cut them down. They're big ol' plants and we just got sick of looking at those dry, brown stalks and pods. But later we heard that it's better to leave them standing because they attract birds.

I was skeptical -- we'd never seen any birds show an interest in our teasels before we cut them -- but this year we decided to leave them for longer and see what happened.

Lo and behold, on Saturday, we were visited by a flock of goldfinches. They landed on the teasels and scoped them out for a few minutes before they were scared off by a big flapping pigeon. I only had an opportunity for a couple of photos, and I never got a great shot, but in the picture above you can see four finches. (I was trying to focus on that one at upper right, in case you're wondering!)

Weirdly, they didn't stick around to sample the nyger thistle seed from the finch feeders. Maybe they'll come back. Fingers crossed. 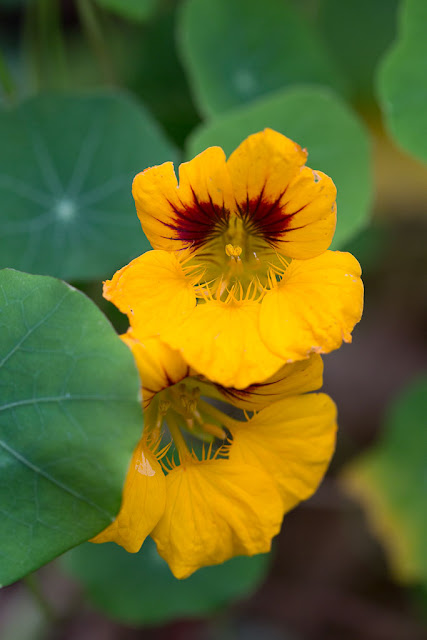 Yesterday I spent some time working in the garden, cutting more dead stuff. We've got one tree in the back that needs to be trimmed because it's blocking the sun from our wildflower garden. I thought I might try to do it myself, but it's a pretty big job. I think we'll call the tree service.

Instead I took down our dead cosmos and our peonies and persicaria and the milk parsley, all of them dry and brown. I also cut back our passion flower vine, and I'm a little afraid that I've killed it -- Dave talked about needing to cut it back, but he really meant trimming it. I cut that sucker back to just a foot of stalk. When Dave saw it, he said, "Oh!"

On the bright side, the nasturtiums are still going gangbusters. They clearly haven't figured out that it's winter.

Dave's high school band concert was yesterday afternoon, and of course I went. I always like to see how well he's managed to wrestle astonishing music from his students! This time they played Dvorak and Grieg, among others, and did an excellent job. Afterwards we went to dinner with his co-workers at a posh place in St. John's Wood, where I had excellent roasted butternut squash and a watery, mediocre martini.

This weekend we rented "First Reformed" with Ethan Hawke. It started out well, but got a bit bizarre as it went -- in the end I'm not sure whether I liked it or not. I didn't find the ending entirely satisfactory and there's a sort of surreal sequence in the middle that I didn't love. The performances were good, though, and I liked its spare, bleak mood.
Posted by Steve Reed at 6:46 AM

Lovely to see the goldfinches. An untidy garden has its bonuses

How on earth did the goldfinches know that there were teasels in your garden? Quite magical.

I adore goldfinches, and nasturtiums, too. I was surprised to see the title of this post in December! Haha. As for the passion vine, you never know...it may be just fine. And if it's not, well....here's what I tell myself when I fail at keeping a houseplant or flower alive and feel guilty, "It's a plant, not a puppy." :)

Oh, those goldfinches! I hope they come back.
That passionflower vine is probably fine. Time will tell.

Those are such pretty birds. I hope they come back.

Goldfinches! Those stunning beauties don't look anything like the goldfinches we have here. Wow. We often learn in spring what we have inadvertently killed in the late fall with our over-exuberant trimming.

Sometimes birds will scout an area and later they will be back for the niger. Finches love niger.

your goldfinches are different than the ones we see here with their orange faces, on the few occasions I catch them as they migrate through. I doubt you have seriously wounded the passionflower. they are very hardy, weeds almost, here at least. I still have some of my dead cosmos lingering but I think I'll take them down this week.

I'm always amazed to see goldfinches in other parts of the world. Ours here have only a bright yellow bottom-side, not the intricate head patterns yours seem to have. I like the picture.

I like the picture, too. We don't remove any dead plants for the winter. They provide cover for insects and salamanders as well as food for the birds. Also, we like lazy-gardening :D As others have said, those goldfinches are so completely different from what we see here. I couldn't even have identified them as finches!

Thanks for your comments, everybody! The finches are European goldfinches, which are different from the American variety. (As many of you pointed out.)