There's a house just down the street from my brother's where the owners go all-out decorating for Christmas. It's truly unbelievable. We took my nieces last night and strolled through the holiday fantasia, and I compiled a little video to show you what it's like -- complete with cheesy Johnny Mathis Christmas songs (which I secretly love) and a special holiday appearance from Dave! 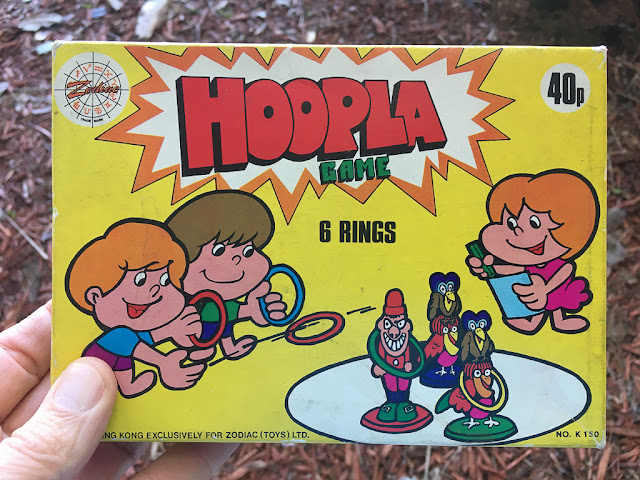 A couple of months ago I found this vintage ring-toss game, Hoopla, while walking Olga in London. It was set out with some other games on a garden wall, clearly meant for someone to take. If I had to guess, I'd say it's from 1970 or so -- those figures of the birds and "Mr. Mean" are very H. R. Pufnstuf, aren't they? Anyway, I brought it to Florida and played it with my nieces last night. I thought they might roll their eyes, but it turned out to be pretty fun!

This morning I woke up in our hotel and decided to risk going out for my morning joe (as usual -- I can't stand in-room coffee). Most places were closed, but I found a Daily's store in a Shell station where I got a cup (southern pecan flavored, allegedly, although you couldn't prove it by me). When I took it to the cashier she said, "Is that all, sir?" I said yes, and she said, "Merry Christmas -- it's on me." That totally made my morning.

The free Christmas coffee is a nice touch! Made me start my day with a smile. Merry Christmas.

I wonder how many people have seizures from all those blinking lights.

Love that gift from the cashier at the Daily Store. The true spirit of the season. Merry Christmas to you and Dave!

Merry Christmas to you, Dave and all the family. That may be the largest home Christmas display I have ever seen.

Free coffee! A great way to start the day. And Merry Christmas back to Dave!

Merry Christmas Steve and Dave! I loved that video.

Merry Christmas! I'm glad to have met your blog-acquaintance this fall, you have such a fun style of reporting the daily goings-on of life.
Free Christmas coffee at a Shell station! Love that.

I also love Johnny Mathis--a friend gave me a CD of his Greatest Hits as an Xmas Eve gift last night! I could sing every song.

That house is insanity at it's best, dear Baby Jesus is squealing with glee,pretty sure! Perfect song, too!

Merry and bright, seasoned greetings to you and Dave and Olga, I hope Santa visits her.

Merry Christmas to you both and I enjoyed the video, its impressive that someone does all that. The free coffee was definitely a nice gesture!

Thanks for sharing the video Steve. Happy Christmas! (What's left of it).

Merry Christmas to Steve and Dave! Wow, that is some house! I have never seen anything like that in our neighbourhood. We only put one single string of lights over the garage door - nothing anyone is going to excited about.

Merry Christmas to you, Dave, and your families!

Merry Christmas to you and Dave! :-)

Merry Christmas to you both.

Takin it cool in Florida and having a good time.

Ihope u had a lovely day. I want it over

Those lights are too much. Is it a competition?
And there's no such thing as a cheesy Johnny Mathis song.
And a last minute Merry Christmas to you....we've already moved on down here.:)
Alphie

What a lot of work in that light display! I'm sure it brings a lot of pleasure to many folks.

The ring toss game reminds me of the midway games at the various fairs and exhibitions we have here. A simple concept but hard to do well!

Nice of that cashier to buy you a Christmas coffee!