Elegy for a Cypress 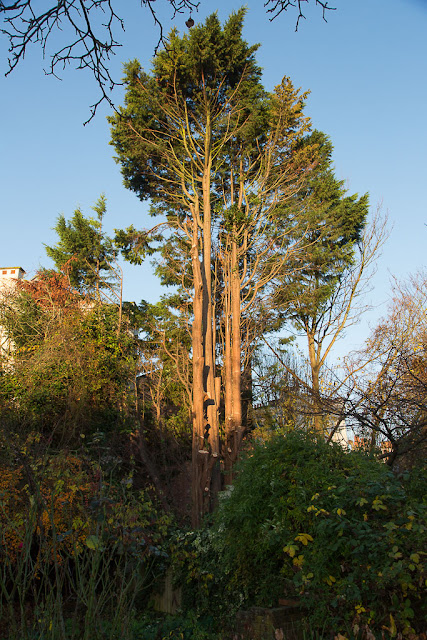 Our next door neighbor has long had a gigantic leylandii cypress at the back of her property, shielding her garden from the prying eyes of the apartment dwellers on the next street over. I couldn't estimate the height of the tree, because I'm bad at that kind of thing, but when I say huge I mean HUGE. It was definitely an effective screen, not only for her garden, but for ours.

In storms it would creak and groan ominously in the wind, but it never showed any signs of breakage and appeared to be quite strong. It would have been disastrous if it blew down, because it seemed big enough to hit a building no matter which direction it fell. I think it could have even hit our house.

Still, I loved the tree because it was always a hive of wildlife activity. We'd hear squabbles among pigeons and squirrels among the dense green foliage, and I'm pretty sure that's where I heard the owl a few years ago. I said to Dave several times, "I hope she never takes that tree down, because a million critters live in it."

You see where this is going.

Yesterday I walked out to the garden with my cereal, as I often do, and as I was wandering around looking at our winter-stunted plants I glanced up and saw that many of the tree's branches had been stripped off (top photo). This must have occurred while we were at work, because we never heard a thing. Last night, when we got home, the entire tree was gone. 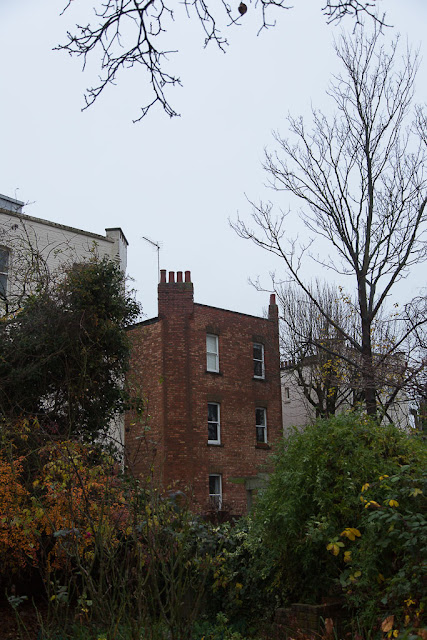 Leyland cypresses apparently grow very fast, and can be a source of neighborhood disputes because they get so big and dense relatively quickly. I've always thought that tree must be very old, but maybe not.

In any case, the critters will miss it. The neighbor did everything right by taking it down now, rather than in nesting season, and I know the apartment people didn't like the tree. One of them came knocking on our door a couple of years ago asking if it was ours, and last summer I overheard the neighbor talking to a visitor on her patio about what a problem it was. I think its roots may have been harming the retaining wall between the neighbor's garden and the apartments, but that's just my suspicion. In any case, I knew its days were numbered, and I don't blame her for having it removed. 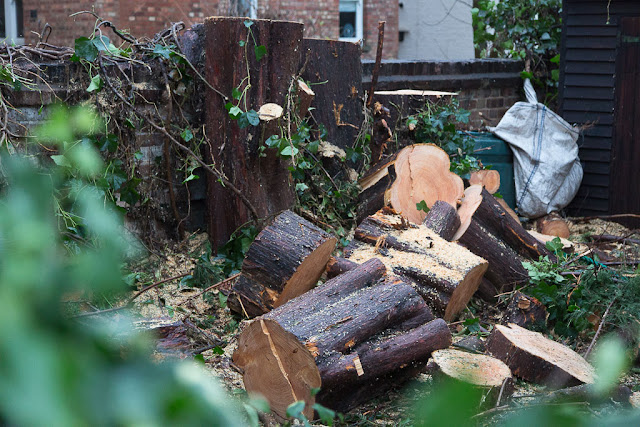 But I'm still sorry to see it go.

It will be interesting to watch how this changes the microclimate of our own garden. It ought to be much sunnier now, and maybe windier, too. We'll see!
Posted by Steve Reed at 8:21 AM

Leylandi have caused so many angry and upsetting boundary disputes across the country. It is a shame that whoever planted that tree had not chosen a different species.

I wonder how much it cost to take such a large tree down in a city?

Wow. It may have been the right thing to do to bring that tree down but it's still so very sad.
And yes- your garden will definitely be sunnier! I wonder if they'll plant something to replace it.

I hate to see trees taken down, sentient beings that they are, even when it's necessary, even the few times I've had it done.

Wow. What a huge difference. Before and After: It's as if you used to live in a woods, and now you live in a city.

I can't resist anthropomorphizing trees and I always feel that they know they are being cut down. And even if I'm not doing the cutting, I feel guilty.

I'm not sure why but I always find it rather sad to see a tree taken down. It really does bring a tear to my eye. I know it has to be done sometimes but I still find it rather sad. I agree, it will be interesting to see how things change.
Question for you...have you watched all of episodes of The Romanoffs yet? I watched the last one last night and I liked it the best of all of them. I thoroughly enjoyed it.

although huge trees are beautiful, they can be a nuisance in many ways. They block out light for many people. They also make big mess for other people to clean up.

the removal of trees is always sad, After ours were so brutally removed we planted some fast growing laurel bushes, not the same but does soften the edges a bit. Removal of the trees however left a lasting effect and a sadness- my baby jay never came back , nor my crow and squirrel. One tree that I do not miss was the one where a cougar lived, had her nest in there. She was lovely but , you know...cougar!
At least the exposed building looks OK- not a gross building, and I suppose more sunshine will require more watering of your garden.

Always sad to see a big tree come down, but better by plan than by storm and winds. Makes me wonder if it was a native.

I'm always sad to see a tree disappear but better it was carefully taken down than it fell down on your house.

Well! This might of necessity change your whole gardening approach! I hate to see trees cut but nothing lives forever and sometimes it must be done.

When the Naylor-Leylands bred the Leyandii they never thought that it would grow so fast or so tall.
It will be interesting to see the microclimate change in your garden.
Hi, via Fresca's blog

What an interesting thought, that the needs of your garden my now be altered. Everything is connected...

I always hate to see trees go, even if someone finds it necessary. They are the lungs of the planet and there are fewer of them every day.

YP: It was probably planted before there was much awareness of the problems associated with Leylandii,

Colette: I wonder too! It can't have been cheap!

Ms Moon: Yeah, it will be interesting to see what happens now at the back of that garden.

Ellen: I hate it too, especially since this one provided a home for so many creatures.

Sharon: We've paused "The Romanoffs" while we watch a British cop drama called "Line of Duty." I've still only seen the first two episodes! We need to get back to it.

Red: Yeah, I think the apartment dwellers on the next street really were unhappy with this tree. I imagine they get a LOT more light in their windows now.

Linda Sue: OK, I'd be nervous having a cougar living nearby, but how SPECTACULAR would that be?! A COUGAR!

Robin: The story of Leyland Cypresses is interesting (see Wikipedia page). Apparently it's an accidental hybrid of Monterrey and Nootka (?) cypresses, with the hybrid originating here in England. I should add that although I've been told this tree was a Leyland, I am not a tree expert and it's entirely possible it was another kind of cypress altogether!

Catalyst: Yes, absolutely. I really did get a bit worried on very windy nights.

Jenny-O: I wonder! The buildings are still there, which will block some sunlight as usual, but I expect it will still be brighter and sunnier -- not a bad thing!

GZ: Welcome! The Leylandii really is an amazing tree in many ways. In a wide-open space it would be beautiful.

37P: Absolutely! And British gardens are all so close together that we affect each other in many ways.

E: Hopefully people are planting some too, but yes, I imagine overall there's a decline. :(

Just one thing..the NL estate is in Wales, near Rhuthun..at one time the trees completely hid the estate wall they grew so fast in the climate there