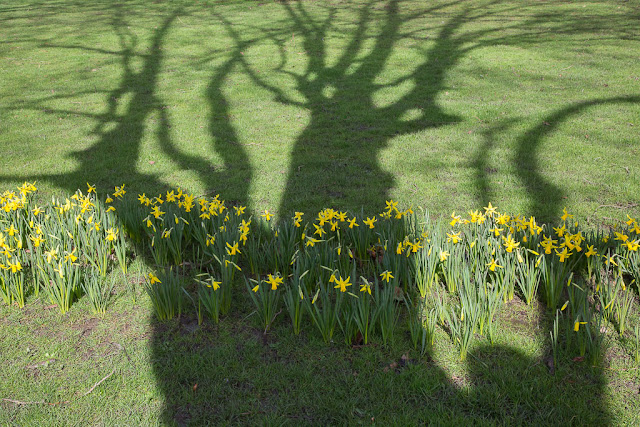 We had some excitement yesterday evening.

First, I came home from work to find that our nosy neighbor Mrs. Kravitz cut down the hawthorn tree in her back garden. Well, I'm sure she didn't cut it down herself, but she had it cut down. Workers were hauling branches out of her garden and packing them into a truck.

This surprised me, because she's been so protective of that hawthorn. In fact, she often complained about a large holly in our back garden that she felt was interfering with her tree's growth. (She also hates the holly because it drops berries on her trampoline). Dave and I had debated taking down the holly, but since we don't own the garden and tree removal is a major expense I've balked -- and now it looks like maybe we won't need to. At least not for the first reason.

Then, after it got dark, Dave and I were in the living room when I noticed a peculiar sound. At first, with the TV on, it sounded like a dog howling. Then I thought maybe it was a fox. But it was very regular, the same tone over and over. I went out in the garden and listened:

The name of my recording gives away the mystery. Yes, it was a tawny owl.

At first, I didn't know what kind of bird it was. A nightingale? They're a British thing, right? But no, I discovered online -- nightingales really sing, more like a mockingbird. This was just that single, low call, repeated again and again. So I suspected an owl.

I found this page of various British owl sounds (isn't the Internet wonderful?) and sure enough, the male tawny owl call matched.

I couldn't see him because he was in a huge, dark cedar in another neighbor's yard. But I have seen a tawny owl before, in Hyde Park.

I guess it can only be a good thing to have an owl in a garden that's plagued with digging rodents! I hope he hangs around!

(Photo: Fortune Green, about a week and a half ago.)
Posted by Steve Reed at 6:25 AM