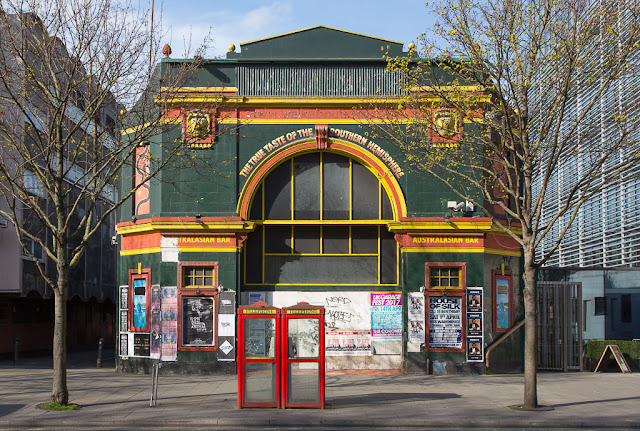 When Dave and I were riding the bus back from Heathrow last weekend, we passed this building in Shepherd's Bush. I was intrigued by the interesting architecture, the colorful paint job and all the posters on the front, so I went back yesterday morning for some photography.

Although it claims to be an "Australasian Bar," that was only in its most recent incarnation as Walkabout. It's really an old movie theater, the Palladium, though it hasn't shown a movie since 1981. Apparently it's been purchased by a developer who plans to turn the building into serviced apartments, while preserving its facade -- sort of like the old Queensway cinema, I guess.

Geez, everything is becoming swanky apartments -- pubs, theaters. It's crazy! And yet, ironically, London apartments are more expensive than ever!

After my brief stop in Shepherd's Bush I took the tube to East London for a photo walk in the Star Lane neighborhood of West Ham. The weather was gloriously sunny, although chilly until midday. I didn't even take that many photos -- it felt so free to keep the camera in the bag and just walk.

I got back home around noon and took Olga back to the Heath. She seemed to be raring to go, but then began dragging on the way there. She kept giving me looks like, "Are we really going all that way?" Could Olga be showing her age?

Anyway, once we got there she was fine, and she slept like a stone all last night. Dave got home yesterday, too, so now we're a family unit once again. We got dinner from Nando's, using my gift card from the South London health trust that used one of my photos on its web site (which apparently is not yet live). As fast-ish food goes, Nando's is pretty respectable -- it's basically baked (or grilled?) chicken with vegetable sides. I may be fooling myself, but I think it's healthier than the colonel.
Posted by Steve Reed at 6:49 AM

Nando's sounds good, and that old theatre really is something. Maybe you'll be able to get some before and after photos.

I know this isn't the same but Tallahassee is cutting down every thing they can to build student housing for FSU and it's just bizarre. They have so much student housing already that I can't imagine how they begin to fill these luxury apartments in these complexes with gyms and pools and hell-if-I-know.
Meanwhile, old neighborhoods are losing their boundaries and it's very sad although I guess that progress is progress.
I just don't understand why we think we need so much constant progress. When does it stop being progress and become blight?

The term garish comes to mind for the wildly painted building.

You find the coolest stuff! That is an adorable building. I read in the NY that rich Chinese families are buying London for their daughters- they have money to burn, the houses are lived in only a fraction of the time, The prices are what the market will bear. The same thing has happened in Vancouver, BC. making it impossible to live there unless you are very wealthy. So it goes. You certainly get a lot of walking in in a day, You have worn out your pooch!! Amazing !

What an interesting building! I can't imagine it as apartments but, who knows. I've had similar feeling about the construction of apartments here. Big huge apartment complexes are going up all over the city but rents never seem to decrease. And, many if not most of the apartments are right up against busy streets making me wonder why anyone would want to live there.

Although I would prefer that buildings like that retain their original use, I would still love to live in an apartment in such a beautiful building (sorry, Red! beauty's in the eye of the beholder).

I could swear I went to that movie theater as a 5 year old child when we lived in London. I felt a rush of deja vu when i saw your photo. Could it be?