Score Zero for the Pomelo 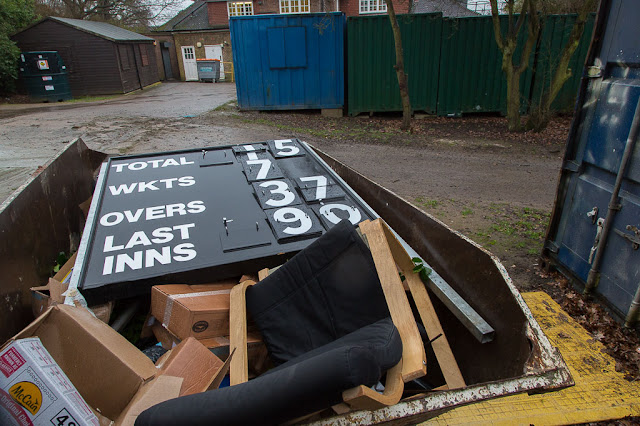 It looks like we're in for a cold, rainy weekend. We had a brief period of spring-like weather, and the sun is definitely brighter, but anything can happen in early March. I don't think we'll get frost and the plants are staying outside.

Olga and I were walking near the cemetery a couple of weeks ago when we noticed the adjacent athletic complex was doing some housecleaning. I showed Dave this picture, and he said, "That scoreboard would be cool to have!" But we weren't industrious enough to go claim it from the dustbin. By now I suppose it has been consigned to the Great Athletic Complex in the Sky.

I think it's a cricket scoreboard. Wickets and overs are crickety things.

I spent all day yesterday shelf-reading, as planned. There is an aspect to my personality that loves organizing and tidying, so I can get into this task. It doesn't bore me at all. I did find several wildly out-of-place books, too, so I felt like I accomplished something -- although a colleague pointed out to me that the eight-graders are due to ravage these same shelves next week when they come in for their non-fiction reading assignment. Everything is impermanent, right?

The other day I had a lot of change in my pocket, so while walking home I stopped at the produce shop in search of something unusual and bought a pomelo. It's a sort of gigantic grapefruit. ("As big as a baby's head," as one of my Peace Corps friends was fond of exclaiming about any large, spherical piece of produce.) It's not something I ate often, even growing up in Florida, where "pomelo" occasionally surfaces as a street name but is rarely seen in the flesh. And now I know why. They're just not very good -- big and pithy and much more bland than a grapefruit. On the rare occasions I've had them in the past I haven't been impressed, and I'm still not. I have to remember that the next time I have an impulse to buy one.
Posted by Steve Reed at 5:54 AM

Painted red, a pomelo would make a great oversized cricket ball and it wouldn't hurt much if it hit you on the head.

I like that suggestion...In the years I've been here, I've never heard of this fruit and it doesn't sound worthwhile to find one.

That cricket scoreboard would look great in our garden!

You know, all my years in Florida and I'm pretty sure I've never once eaten a pomelo.

I've never eaten one either. don't think I'll be tempted.

I now know right where that athletic field is located thanks to our little walk that way when I was there. I don't think I've ever had a pomelo and probably never will given your description.

Knowing my taste for bland things, I probably should hunt up a pomelo, given your description - lol

I'd have been more interested in the chair than the scoreboard, but to be fair, the scoreboard would be a better conversation piece!

Books being out of place is a librarian's challenge. My daughter worked as a library page when she was in highschool. Sometimes she got sidetracked and di a lot of reading.