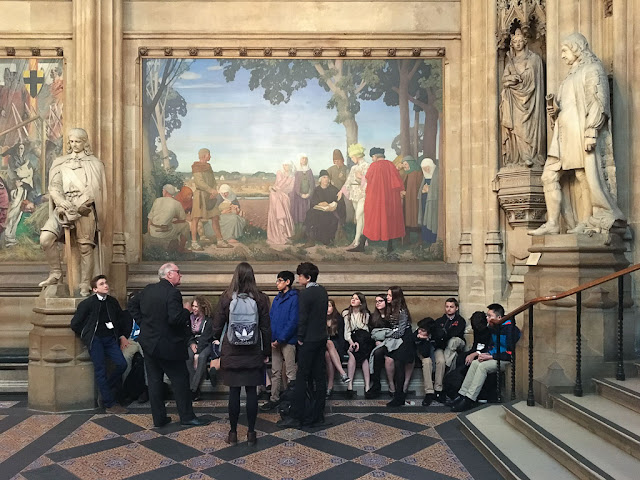 Yesterday I helped chaperone a group of 8th graders on a field trip to the Houses of Parliament. I'd never before been inside Westminster Palace, so I was excited about the opportunity, and it was very interesting to see in real life so much of what I've seen on television.

The tour guide gave us a history lesson as well as walking us through the building, so it wasn't just a matter of seeing the architecture but understanding the development and context of British democracy. For example, we heard all about the Magna Carta, Henry VIII, Elizabeth I, the Gunpowder Plot, the execution of King Charles I and the rise of Oliver Cromwell, and then his eventual execution and the ascendance of William and Mary. (Several hundred years are collapsed into that sentence.)

We also heard about all the elaborate traditions involved in the opening of parliament by the monarch -- like the messenger sent from the House of Lords to summon MPs. No monarch has entered the House of Commons since 1642, and to assert its superiority the door is traditionally slammed in the messenger's face. He has to knock three times before MPs will come to hear the monarch's opening address in the Lords. There's a visible dent in the door where the messenger always knocks with his staff. 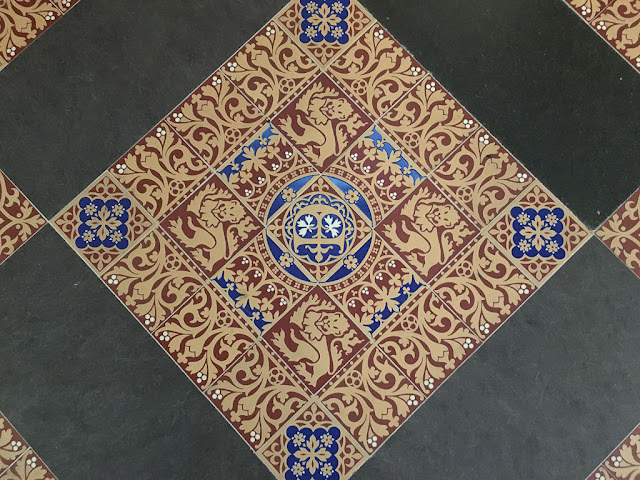 You can't take photos in most places in Westminster Palace, so I didn't even bother bringing my big camera. I just took my iPhone. It looks about like you'd expect -- very ornate and gilded. The floors were quite elaborate!

Virtually the entire structure was destroyed in a fire in 1834, so most of what we see now as Westminster Palace really isn't that old. (Relatively speaking.)

We saw the House of Lords and the House of Commons, both smaller than they seem on television. We were not allowed to sit on the benches. 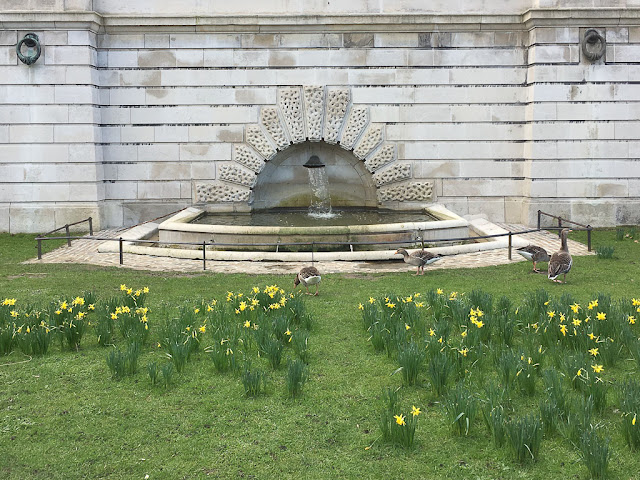 Afterwards, we took the students for a walk through Parliament Square (where we ate lunch -- I grabbed a sandwich and coffee from a nearby Cafe Nero) and then through St. James Park (above) and Green Park. Fortunately the weather cooperated, and the kids were very well-behaved so no disciplinary intervention was required on my part! (Another chaperone was with me as well.)

An interesting day and a nice break from the library!
Posted by Steve Reed at 6:39 AM

I have never been inside The Palace of Westminster myself. Sounds like an interesting trip. Why didn't you pay for your sandwich and drink in Cafe Nero instead of "grabbing" them and running off? Not a good example for the eighth graders.

Did anybody mention the broom cupboard in the basement behind the crypt where the suffragette Emily Wilding Davison hid herself illegally during the night of the 1911 census? She could then claim that her address was The House of Commons where women were barred from.
More here: https://tinyurl.com/hsffs9v

Definitely a different sort of day!

Yes, I'd e impressed by Westminster. I'm surprised they didn't have an MP speak to the kids. Here we can sit in the benches and choose whose seat we want to sit in . I have a photo of my daughter in the speaker's chair.

Oh my gosh, I'm so jealous. I would love to have been along for that tour. I remember seeing that whole "door-knocking" tradition portrayed on some television show I saw a year or so ago. What a great experience.

I always wonder why cameras are not allowed in certain places. Is it just to maintain the mystery or do bright flashes cause damage? I will have to Google it :)

It's nice to have a change of routine - I'm glad the kids were well-behaved and made the outing a good one.

I can remember standing outside the Houses of Parliament and asking a bobby if he could tell me where Westminster Abbey was. Amazingly he kept a straight face as he raised one arm and pointed directly over his shoulder!

So jealous! I will have to do that one day - sort of avoid the crowds of touristers if you know what I mean. Annoying at best. That was a pretty good walk with a gaggle of children, then did you all pile onto a bus to get back to school? The Daffodils are a welcome sight! Still snowing here.

Sounds like a fun excursion. How did the kids react?

YP: It was very interesting! I recommend it! And Nero charges too much.

Sabine: No! What a great story!

Red: Well, you Canadians are a laid-back lot. :)

Sharon: Yeah, the traditions and their continuation are pretty amazing.

Jenny-O: I assumed the no-camera thing at Westminster was for security, but who knows? I know in art museums they often ban flash because the lights can damage pigments.

Catalyst: I bet they get that question ALL THE TIME!

Linda Sue: We took the tube, believe it or not! At rush hour! That was the most stressful part of the trip, making sure all 18 kids got on and off in the right places!

E: With one or two exceptions, they were typical middle-schoolers -- a smattering of interest and some occasional questions, but an overall veneer of utter boredom.